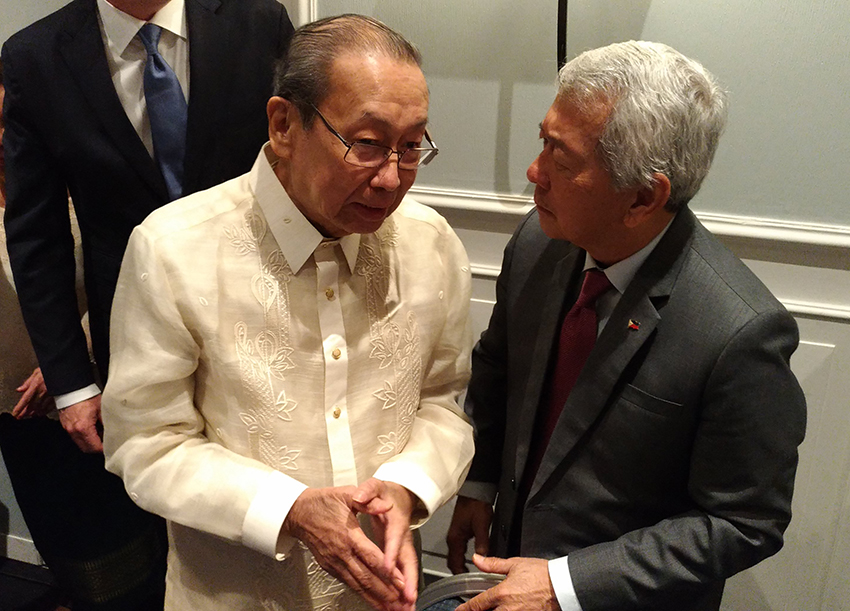 MOST AWAITED. Meeting the founder of the Communist Party of the Philippines Jose Maria Sison (left) is listed on the bucket list of Foreign Secretary Perfecto Yasay Jr (right). Yasay said he admires Sison’s dedication for the welfare of the Filipino people. The two met during the third round of the GRP-NDF peace talks in Rome, Italy.  The Government panel will recommend to the US the delisting of Sison from its terror list. (Zea Io Ming C. Capistrano/davaotoday.com)

ROME, Italy —- The Joint Statement that is set to be read during the closing ceremonies of the third round of peace talks between the Philippine government and the National Democratic Front of the Philippines today will include the request of the government peace panel to the US government to delist NDFP chief political consultant Jose Maria Sison from the US terror listing.

“It is important for Joma to be able to go to the Philippines, probably in response to the President’s statement that he is willing to meet Joma Sison in any neutral Asian country,” GRP peace panel chair and Labor Secretary Silvestre Bello III told reporters in an interview here Tuesday.

Fidel Agcaoili, chairperson of the NDFP peace panel said: “we welcome the government’s move to delist Professor Sison, the CPP/NPA/NDF from the US’ terrorist list inasmuch as it was something that was done upon the behest of the Gloria Macapagal-Arroyo government.”

He, however said the Philippines does not qualify as a “foreign, neutral place” where President Rodrigo Duterte would want to meet his former professor, Sison.

Bello said the basis of the request is Sison’s participation to the peace process.

The removal from the terrorist list “negates the character of a terrorist,” he said.

“If it’s possible, we would prefer that talks be held in the Philippines,” he said.

In August 2002, the Arroyo government lauded the US government’s designation of the Communist Party of the Philippines/New People’s Army as a “Foreign Terrorist Organization.”

A portion of the US’ State Department’s Patterns of Global Terrorism 2002 document reads: “The US government also designated CPP/NPA and its founder Jose Maria Sison pursuant to Executive Order 13224. Authorities in The Netherlands, where Sison is living in self-exile, subsequently froze assets in his bank accounts there and cut off his social benefits.”

“How can it be a foreign neutral venue? It’s not a neutral country, it is the Philippines and the GRP is the power seating in Malacanang,” NDFP’s Agcaoili said.

Agcaoili said in 1987, when the GRP and NDFP held the talks in the Philippines, the NDFP panel was “constantly put in surveillance.”

He said when the peace negotiations broke down, many NDFP peace consultants were arrested and killed.

“That’s why we have always insisted that the talks be carried out in a foreign neutral venue abroad,” he said. (davaotoday.com)