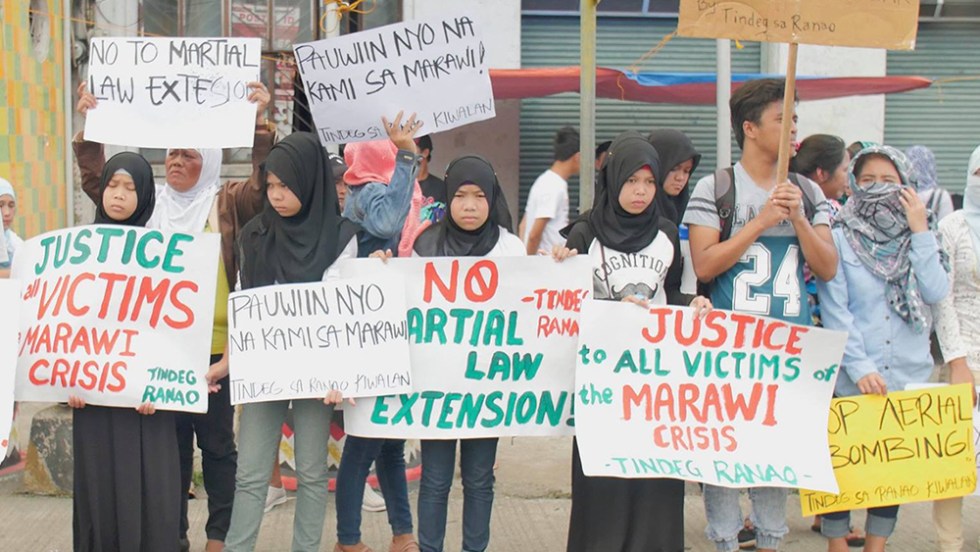 CAGAYAN DE ORO CITY, Philippines – A group of Marawi residents are planning to file a class suit against the government for the destruction of the city’s properties and the deaths of civilians due to the conflict between state forces and local terrorists.

Two support groups of the Marawi crisis victims said in a joint statement that Pres. Rodrigo Duterte should be made accountable for the devastation brought by the fighting between the government troops and members of the Abu Sayyaf, Maute Group and the Bangsamoro Islamic Freedom Fighters (BIFF).

The war in Marawi has displaced thousands of civilians who fled during the first few days of the conflict.

During the siege, residents have witnessed various forms of abuses being committed not just by the extremists but also by the state agents.

These reports will be the basis of the class suit that the victims will be filing, said Jerome Succor Aba, spokesperson of the Suara Bangsamoro.

“There were numerous cases of human rights violations,” said Aba in an interview Thursday afternoon.

In a separate interview, Aida Ibrahim of Tindeg Ranao, many of the evacuees have already signed affidavits documenting the abuses they had experienced by government troops.

She said during the second round of the National Interfaith Humanitarian Mission (NIHM), some of the civilians have recounted the violations allegedly committed by soldiers.

Ibrahim said more evacuees are willing to execute affidavits to bolster the filing of the class suit.

Aba said the reports collated from the NIHM will be also be used as documentary evidence.

Both Ibrahim and Aba have yet to give the exact date of the filing as more documents are still being prepared.

In a joint statement, both Tindeg Ranao and Suara Bangsamoro are calling for the lifting of martial law in Mindanao as residents in Marawi have expressed their desire to return to their homes after Pres. Rodrigo Duterte declared the besieged city as “liberated.”

Both groups and other belligerent factions in Mindanao have pledged allegiance to the Islamic State.

In a joint statement released to the media Oct. 19, Tindeg Ranao and Suara Bangsamoro are demanding for the government to finally terminate the martial rule in the island, to stop the military the offensives and the pull-out of state forces in Marawi after Duterte made the pronouncement.

Suara Bangsamoro said it finds Duterte’s announcement of a “liberated” Marawi ironic because in place of “terrorists,” the Armed Forces of the Philippines aided by foreign troops including the US troops “are still in control of Marawi City because of the continuing Martial Law declaration and due to their role as architects of Marawi City’s rehabilitation.”

At the same time, evacuees who want return to Marawi “are afraid of military reprisal should they decide to file cases or hold responsible the government for the destruction of their communities and their more than four months-long displacement due to intensive military airstrike which became the response to suppress the Dawlah Islamiya [Maute Group],” Tindeg Ranao said.

The Moro groups have maintained that the government should be held accountable for the death and displacement of Marawi resident and the destruction of their community due to the aerial assaults carried out the by military.

They said the decisions and actions of the current administration undermine efforts for resolving conflict in Moro areas and push more Moro people to fight against fascist policies.

“[We] hope that calls for independent investigation to reports of human rights violations committed by the military to evacuees will not be glossed over as the government [announced] victory over the terrorist group,” they said.

Zia Alonto Adiong, spokesperson of the Lanao del Sur Provincial Crisis Management Committee, in a statement said that with the declaration of the President, Marawi and its people can now “focus on rebuilding, rehabilitating not only the physical infrastructures but more importantly, the social fabric of our community in the hope that we can truly have a peaceful, developed and a caring society in Marawi and its neighboring communities.”

Adiong said the deaths of Hapilon and Maute provides Marawi “an opportunity not only to win the war against violent extremism, but also the rare privilege of winning the peace by addressing the root causes of the conflict in Mindanao.” (davaotoday.com)