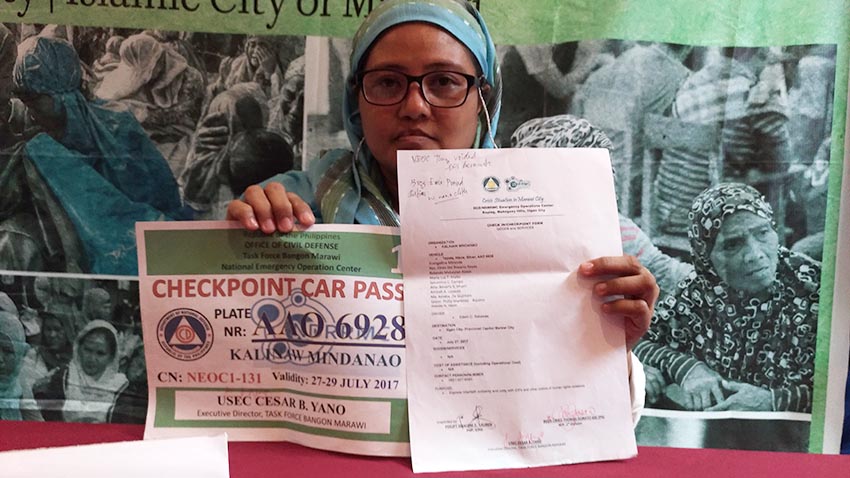 VOID PERMIT. Amirah Lidasan, convenor of Kalinaw Mindanao shows the permits secured by the National Interfaith Humanitarian Mission that would have granted them entry to the city of Marawi to distribute relief goods. In a press conference on Monday, July 31 in Cagayan De Oro City, Lidasan said they were stopped by the military saying their permit was no longer valid when they were about to enter the city last Friday, July 28. The permit was issued by the Office of Civil Defense the previous day. (Paulo C. Rizal/davaotoday.com)

​CAGAYAN DE ORO CITY, Philippines — A humanitarian mission that was barred entry to Marawi despite securing the necessary permits a day earlier, criticized what they call as “arbitrariness” of military rule in the city.

In an interview with Davao Today, Kalinaw Mindanao convenor Amirah Lidasan, one of the personalities behind the National Interfaith Humanitarian Mission, said the military constantly justifies its questionable actions by citing Martial Law.

In particular, Lidasan cited how they were barred entry into Marawi City despite being duly granted permits by the Office of the Civil Defense a day before.

Lidasan said the NIHM was supposed to enter Marawi City ​on July 28, but were told that their permits were voided by the same office that granted them.

Lidasan said they were already able to get past Barangay Emie Punod in Marawi when they were again stopped
​in a checkpoint. There, they were told that their permits were already voided by the OCD.

“Sabi ko, eh kabibigay lang ng permit na ‘yan paano niyo mavo-void” (I said, but they just issued that permit, how can that be void?),” she said.

Lidasan said they went back to the OCD to clarify the situation, to which they were told to speak to Undersecretary Cesar Yano, who was then not around.

Yano ​is a retired brigadier ​g​eneral of the Philippine army. He retired from service in 2013.

Lidasan also recounted how soldiers prevented evacuees from joining a mass mobilization in Iligan City on the day of President Rodrigo Duterte’s​second State of the Nation Address.

Lidasan said the evacuees already had with them valid identification cards proving their status as internally displaced persons. However, on the day that they were about to travel to Iligan, the evacuees were told they still had to secure cedulas (community tax certificates).

Lidasan said this would have been impossible to secure given the timing and the status of the evacuees as displaced persons.

Lidasan also cited the case of Arafat Lala, a Maranao evacuee arrested by authorities on July 23 after he was accused of being a member of the Maute group, an ISIS inspired band of rebels that laid siege to Marawi.

Noraidah and other evacuees deniedthis accusation, insisting that he was merely a mechanic.

On July 26, Karapatan legal counsel Maria Sol Taule accompanied Noraidah to the nearby Saguiaran Police Station to clarify the situation. There, a soldier tried to take photos of them purportedly for a police report.

When Taule refused to give permission for the soldiers to take their photos, she was simply told “Martial Law ngayon (It’s Martial Law now).”

Now on its second wave, the NIHM was also barred entry to Marawi on June. It is organized by Kalinaw Mindanao, an interfaith network founded on the heels of former President Joseph Estrada’s all out war in Central Mindanao in 2002.