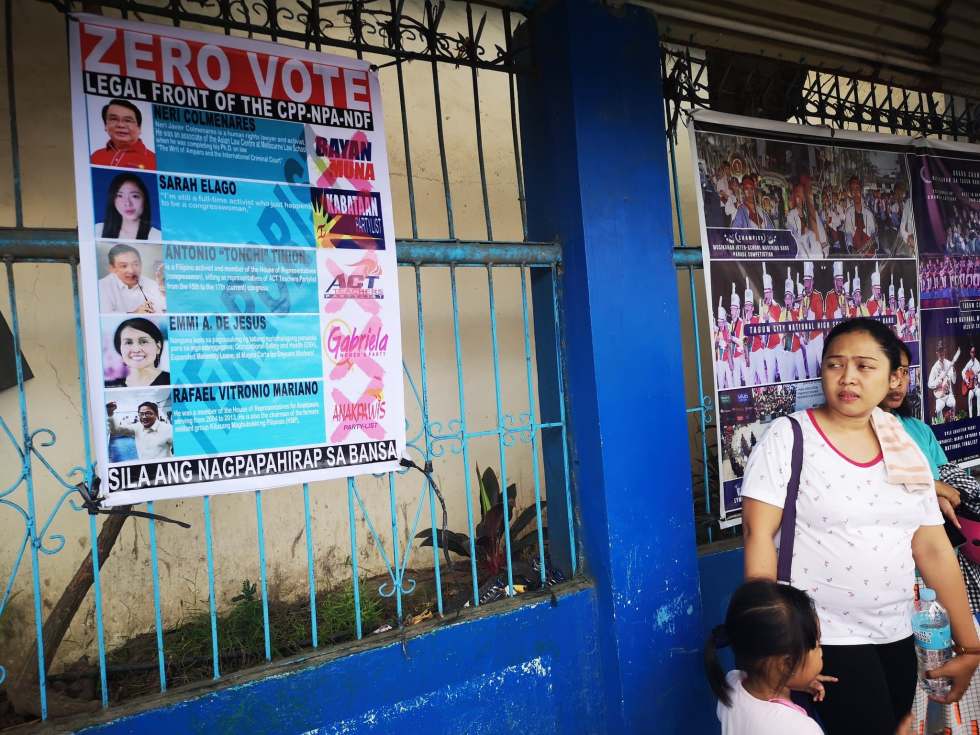 Malicious tarpaulins campaigning against progressive Makabayan party lists were reported to be seen near polling centers in the cities of Tagum, Cotabato and Davao. (Photo courtest of Bayan Muna-Southern Mindanao Region)

“The massive red-tagging on election day is a vicious move to discredit and demonize the aforementioned organizations. The administration is desperate to ensure its hold over Congress and other government institutions, and to enforce its dictatorial policies,” Sissay said.

A huge tarpaulin was also found along the highway in Tagum City that says, “Alyado sa Teroristang NPA” and “Ayaw iboto” bearing the logos of Makabayan party lists.

The same tarpaulin was also sighted in Cotabato City and along Maa highway in Davao City.

Sissay said several more cases of red-tagging and harassment of poll-watchers were also documented in various parts of the country.

Watchdog Kontra Daya documented some police distributing “Pulis Serbis Balita” tabloids with the identification as “The Official Newsletter of the Philippine National Police” near polling center at Geronimo Elementary School in Sampaloc Manila on Monday morning.

Earlier, reports circulated that Makabayan party-lists had been disqualified in the party-list race that the Commission on Elections (Comelec) has already refuted.

Senatorial candidate Neri Colmenares has called on the Comelec to look into these reports.