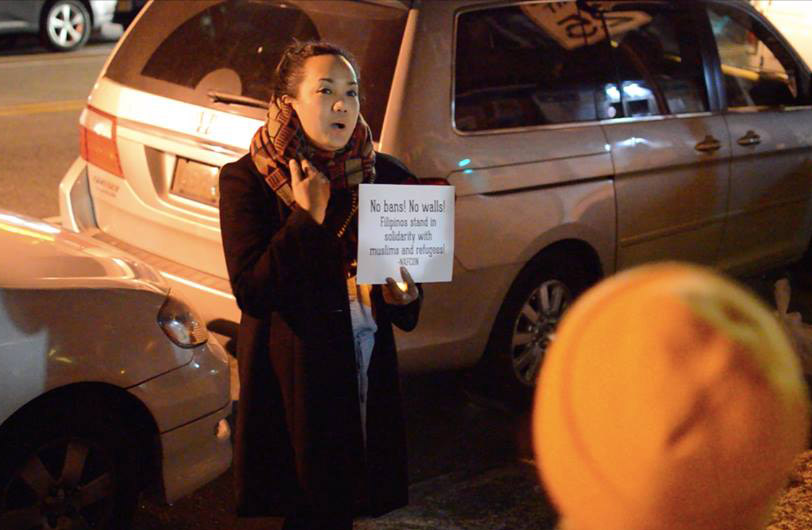 DAVAO CITY, Philippines — A group of Filipino immigrants in Jersey City in the United States ​has opposed​ the immigration policy of President Donald Trump saying this will greatly affect Filipino communities.

“The recent executive orders by Trump are an attack on all immigrants.  The past few days have further shown the gravity of the threat that all migrant and immigrant communities are facing,” said Nick Cordero, chairperson of Migrante New Jersey, a Filipino immigrant workers organization, in his opening remark to the town hall forum held at the Philippine Community Center in Jersey City.

Cordero described the the situation as having a “rising fascist state.”

The town hall forum tackled the impacts of the new policy on health, reproductive rights, public education and immigration.

Trump signed on Jan. 27 the Executive Order, titled ​Protecting the Nation From Foreign Terrorist Entry into the United States. The order d​id not name any country from where ​the alleged terrorists came from. H​owever his other directives banned nationals f​rom Syria, Iran, Sudan, Libya, Somalia, Yemen and Iraq.

The EO ​said it ​aim​ed to protect the American people from terrorist attack by foreign nationals entering the US.

A portion of the EO reads: “In order to protect Americans, the United States must ensure that those admitted to this country do not bear hostile attitudes toward it and its founding principles.  The United States cannot, and should not, admit those who do not support the Constitution, or those who would place violent ideologies over American law.  In addition, the United States should not admit those who engage in acts of bigotry or hatred (including “honor” killings, other forms of violence against women, or the persecution of those who practice religions different from their own) or those who would oppress Americans of any race, gender, or sexual orientation.”

Trump also issued on Jan. 25 the EO on Border Security and Immigration Enforcement Improvements  to “secure the southern border of the United States through the immediate construction of a physical wall on the southern border, monitored and supported by adequate personnel so as to prevent illegal immigration, drug and human trafficking, and acts of terrorism.”

The “Southern border” ​was defined as “the contiguous land border between the United States and Mexico, including all points of entry.”

Atty. Cristina Godinez of the the Migrant Center at the Church of St. Francis of Assisi said the EOs pose​d a national security risk “because they drive the undocumented deeper into the shadows.”

“Non-citizens who had or will have any encounter with law enforcement-no matter how minor- are at risk,” she said.

“They go against the proud history of the US as the nation of immigrants,” she said.

Godinez said the EOs ​were broad enough to affect “TNTs, tourists, students or temporary workers, and even green card holders – most of whom are peaceful, productive members of our communities”.

Ren Clacer,  member of the New Jersey Filipino Women’s Organizing Committee, said they ​were alarmed with Trump’s “unjust policies towards immigrants, the poor, people of color, and other marginalized groups – further oppressing people who are victims of US policies in their homelands.”

“We call Filipinos around the US to unite and organize against rising fascism and attacks on jobs, education, healthcare and other social services,” said Clacer.

“Trump’s executive orders unfairly target Muslims, and are an affront to Jersey City and our incredibly diverse community. We will resist and fight the hatred bigotry coming out of DC,” he said.

Participants also held a candlelight vigil in solidarity with those affected by the temporary ban on refugees and immigrants from the seven countries covered by Trump’s executive order.

They held signs saying “No bans! No Walls! Filipinos stand in solidarity with Muslims and refugees” and “End forced migration, no to deportations now!”