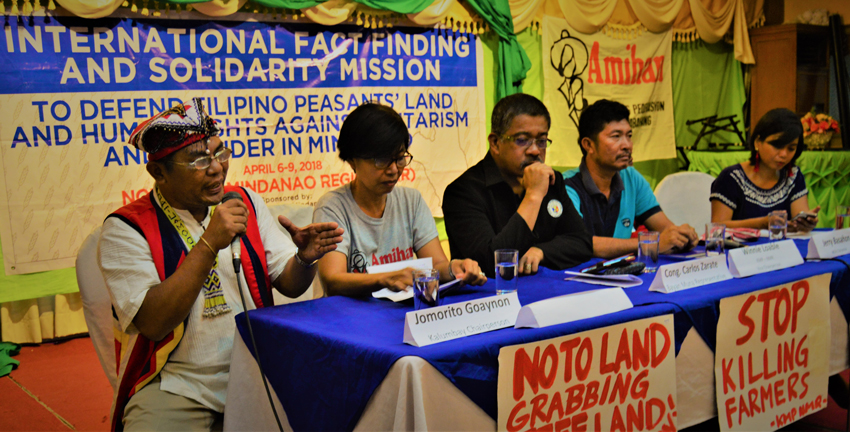 Datu Jomorito Goaynon (left) tells reporters during a press conference Monday, April 9, 2018, that their fact-finding team was able to record various forms of abuses allegedly perpetrated by some members of the state forces in Northern Mindanao. (Jigger J. Jerusalem/davaotoday.com)

CAGAYAN DE ORO CITY, Philippines – Cases of abuses against civilians allegedly perpetrated by state security forces continue to pile up in parts of Northern Mindanao as martial rule is still in effect in Mindanao, a report of a fact-finding body revealed Monday.

Conducted by the Northern Mindanao region team of the International Fact-Finding and Solidarity Mission (IFFSM), the group of investigators from various sectors found out that there were dozens of victims of different human rights violators in Bukidnon and Misamis Oriental provinces from January to March, this year.

The report was the result of the four-day investigation conducted by the group last week and was presented to the media during a press conference here Monday.

Czarina Golda Musni, of the Union of People’s Lawyers in Mindanao, said the mission “aims to document the extent of state-sponsored killings and other rights abuses against farmers and indigenous people in Mindanao due to the intensified militarization of peasant communities and expose the lies of [Pres. Rodrigo] Duterte and the state armed forces that no violations were committed under Martial Law.”

Among the 54 violations that were reported by people in the community to the IFFSM were extrajudicial killings (EJKs) and frustrated EJKs, torture, illegal arrest and detention, trumped-up charges, threat, harassment, intimidation, forced surrender, and illegal search and seizure.

According to IFFSM, among the victims of the abuses was a certain Aniceto Lopez Jr., who was allegedly killed by a member of the Phil. Marines.

Based on its investigation, IFFSM found out that Lopez was gunned down in Barangay Paitan, Quezon, Bukidnon on Jan. 22. He sustained seven gunshot wounds.

Days before he was killed, Lopez was accused of being a member of the New People’s Army (NPA), the group said.

Winnie Loable, vice-chairperson of KMP-Northern Mindanao Region, said that based on the team’s investigation, farmers and “lumad” (tribal people) are the targets of the counterinsurgency campaign of the Armed Forces of the Philippines (AFP).

“They are accused as NPA members or supporters and charged with trumped-up cases simply because of their active participation in land struggles and affiliation in peasant organizations,” Loable said.

Crackdown on people’s organizations, including fake terrorist lists, threats to people’s democratic rights and curtailment of basic civil and political rights were also recorded by the team, said Datu Jomorito Goaynon, chairperson of Kalumbay Regional Lumad Organization and one of the members of the fact-finding group.

Cathy Estavillo, secretary-general of the National Federation of Peasant Women, said the trumped-up charges filed against farmers were reported to have grave effects on the families of the victims.

“Their husbands were forced to stop working in the farm for fear of being illegally arrested. As a result, the mother is forced to bear the burden of providing for the family alone,” Estavillo said.

The use of Army troops and military deployment in communities with struggles for land and ancestral domain are clearly used to pursue the interests of corporate plantations and other forms of environmental plunder, said Jerry Basahon, chairperson of Misamis Oriental Farmers’ Association.

For his part, Rep. Carlos Zarate, of the Bayan Muna partylist, said state forces under the Duterte administration are committing “grave and blatant violations of the Comprehensive Agreement on the Respect for Human Rights and International Humanitarian Law (CARHRIHL), including violations to the people’s socio-economic and cultural rights, civil and political rights, and the rights of persons in the midst of armed conflict.”

Zarate said: “These violations are further intensified under Duterte’s martial law in Mindanao which goes beyond targeting individuals affiliated to various people’s organization. There is a blanket repression by elements of the military and police against civilians that further curtail their basic human rights.”

The lawmaker added the IFFSM will bring the report to concerned government institutions such as the Department of Justice, Commission on Human Rights, the House of Representatives, and the Senate in the hopes that concrete actions will be done to address these reported abuses.

In a previous interview, 1st Lt. Tere Ingente, spokesperson of the Phil. Army’s 4th Infantry Division 94ID), has urged victims of human rights violations to file formal complaints and give a complete account of the abuse, including the name of the soldier who is alleged to have committed the wrongdoing and the unit he belonged to. (please link to previous article)

Misamis Oriental and Bukidnon are within the military jurisdiction of the 4ID.

In the same interview, Ingente has maintained that the 4ID will not tolerate abusive personnel adding the Phil. Army will not hesitate to investigate once they receive a formal complaint, and that they will take appropriate action such as demotion or dismissal from service once the accused is found guilty. (davaotoday.com)