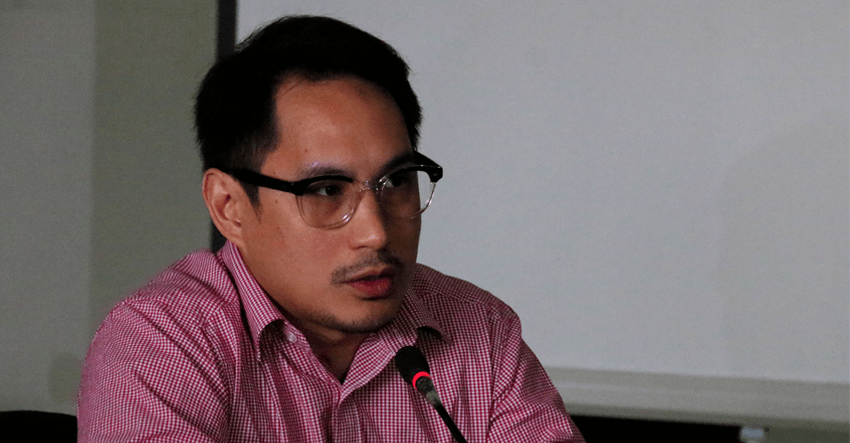 HISTORICAL INJUSTICE. Provincial Crisis Management Committee spokesperson Zia Alonto Adiong reiterated during the press briefing at the Provincial Capitol in Marawi City on Friday, June 23 that addressing the historical injustice against the Bangsamoro is a key to end extremism and radicalism as the issue is being utilized by extremists to win the hearts of young Moro people. (Alex D. Lopez/davaotoday.com)

MARAWI CITY, Philippines – Unless the historical injustices done to the Moro people is addressed through joint efforts by the government and other sectors, the issue will continue to be exploited and used by radicals and extremists to persuade other Moros, especially the youth to join their ranks.

This was expressed by Zia Alonto Adiong, the spokesperson of the Provincial Crisis Management Committee in a press briefing on Friday, June 23 at the Provincial Capitol here.

Friday, June 23, marked the first month of the Marawi siege that broke out last May 23.

“As long as there is an issue and the Moro problem is not solved – the narratives of the social injustice committed against the Moro people, this group will exploit that narrative in order to get attention, audience from the ground,” Adiong pointed out.

He said that these extremists, such as the Maute and Abu Sayyaf do not have a national liberation agenda.

“They are using the historical injustice against the Moro people as a platform to convert young people to join them in the fronts,” he added.

Adiong emphasized the importance of addressing the problems of the Moro as one way of fighting radicalism and extremism but must be done not only by the government but also with the support of other sectors, including the traditional and religious leaders.

“We are not trying to win our fight in Marawi against this group but winning the war against violent extremism,” he said.

“Extremism is very alien to us,” Adiong added.

He also told reporters that few months before the siege broke out, the provincial government of Lanao del Sur already asked the Department of Education to monitor Madrasahs especially those that are run privately.

He added that the local government wanted to absorb all the unregulated Madrasahs and transform into Madaris system.

“This group (Maute) try to get members from these Madrasas. In fact, some of the fighters in the Maute and Abu Sayyaf are as young as 11, 12 to 16 years old,” Adiong said.

The spokesman emphasized the importance of mobilizing all the stakeholders now, including the traditional and religious leaders to fight Maute and other extremist groups.

The traditional and religious leaders, he added can convey the messages of Islam correctly to the youth who are the usual victims of extremists and radicals.

In the same press briefing, Lt. Col. Jo-Ar Herrera, spokesperson of the Joint Task Force Marawi told reporters that the military still cannot give a specific timetable as to when the ground operations in Marawi end.

“Hindi po tayo nag-establish or nagsabi ng deadline. Our goal is to continue our combat and clearing operations,” Herrera said.

Herrera said that the safety of the more or less 300 trapped civilians and hostages is also one of the priorities of the military.

Among the indications that the military rely on why the Maute is losing the war is the decrease of the resources, especially ammunition.

The increase of the areas controlled by ground forces is also a factor why the Maute is slowing down in their offensives, he added.

Herrera said the Maute failed to achieve their goals and objective, and that is to get hold of Marawi.

On his estimates, around 90 to 100 Maute members are remaining in the area.

Aside from neutralizing the Maute, the Armed Forces of the Philippines is also working with the local government on the reconstruction and rehabilitation of Marawi, Herrera said. (davaotoday.com)