AFP to add another battalion to guard Davao’s perimeters 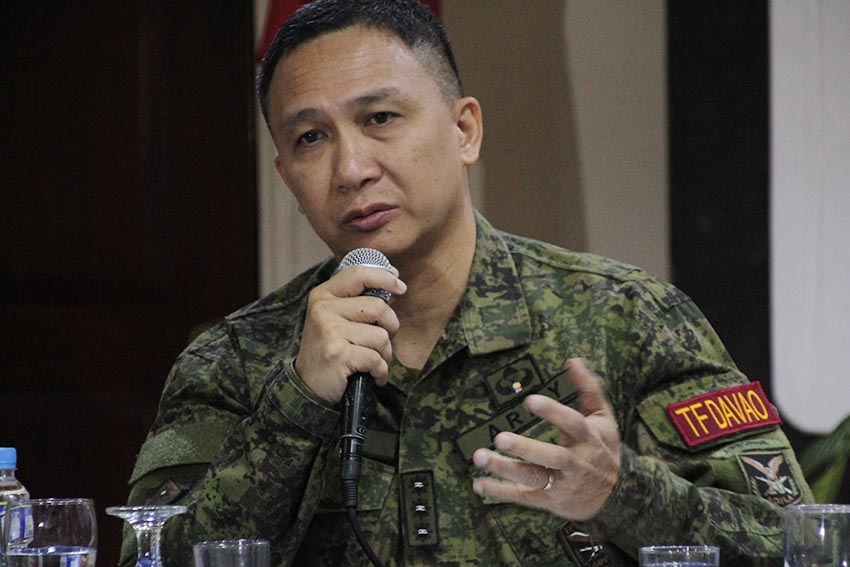 ​Retired Army general and current DCPSSCC chief, Benito de Leon admitted that the recent skirmishes between soldiers and the communist rebels at the city’s outskirts have raised important concern to the city’s security forces.

“We have certain skirmishes that have happened as a result of the suspension of the peace talks and this is challenging the government. It is just sad to note that this is happening in the city,” De Leon referring to the armed encounter with the New People’s Army in two districts here, Calinan and Paquibato, on February 16.

The encounter claimed the lives of two government troops and three guerrilla fighters. Meanwhile, 15 government soldiers were also injured in a landmine allegedly set-off by the NPAs in Barangay Lamanan in Calinan district.

“The city has a very big area far from the metropolitan area but it is still the city. So we have skirmishes and that is part of our security concerns perpetrated by, shall we say members of the NPA,” De Leon said.

De Leon clarified that they ​are dealing also ​with other armed groups, but “not as urgent as the NPA”.

Meanwhile, Col. Bernard Neri said there was no problem as far as the security of the downtown area is concerned, but clarified that the terrorism threat level remains “high” at level 3.

Neri said the security in the city is “very manageable” given the number of security personnel deployed.

“It will not only be Task Force Davao that will be involved in the security of the celebration of the 80th Araw ng Dabaw. It will be an Armed Forces [effort] headed by the Joint Task Force Haribon,” Neri said.

Apart from the army component, some 3,000 police personnel will also be deployed in key points of the city to secure the festivities. (davaotoday.com)