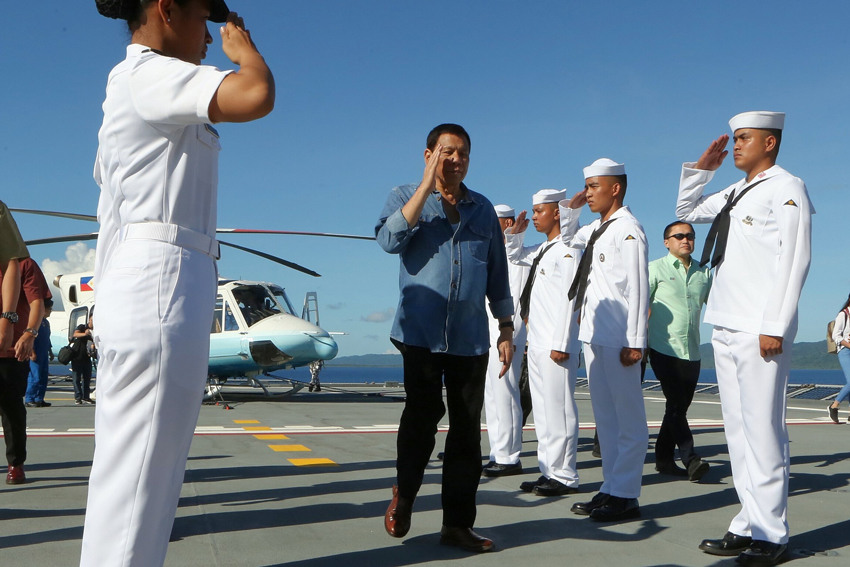 President Rodrigo Duterte is accorded with sideboy honors upon boarding BRP Davao del Sur as they sail towards the Philippine Rise for its commemoration on May 15, 2018. (Malacañang photo)

MANILA, Philippines — After promising that he would ride a jet ski going to the Philippine Rise to assert the country’s claim on the region, President Rodrigo Duterte has failed to reach the resource-rich continental shelf.

Duterte’s scheduled visit to the Philippine Rise on Tuesday was highly anticipated and hyped with most media outlets covering the event even before it started.

The presidential chopper landed at the hangar of the BRP Davao del Sur at 3:45 pm, almost two hours late from his scheduled arrival. He was with Special Assistant to the President Christopher “Bong” Go.

Duterte was welcomed by top military officials and government executives in a ceremony held to send-off 50 Filipino scientists who would conduct scientific research in the 13 million hectare region.

Presidential Spokesperson defended the event which he dubbed as still “symbolic.”

“This is symbolic because this is the trip to Philippine Rise and we are here to send-off the Filipino scientists,” Roque said in an interview.

Roque said Duterte failed to visit the Philippine Rise because: “It’s a little bit far. It’s 120 nautical miles away. And it’s a logistic nightmare. So this is symbolic.”

Go and presidential son Sebastian “Baste” Duterte rode the jet ski instead during an apparent “photo-op.”

Magdalo Rep. Gary Alejano denounced Duterte’s event as a mere “PR stunt which missed its target, in both purpose and execution.”

“The presence of the president in the event would have shown the world that Philippine Rise is ours and we are determined to protect it. However, such an event loses its significance in light of our inaction in the West Philippine Sea, where the real incursion to our territory has been happening,” he said on Wednesday.

“It is clear that Duterte tried to project an image that he is asserting our territorial rights. This plan failed because people can see through this administration’s foreign policy performances. Foreign policy is asserted through consistent actions with substance; not one and done public performances which do not actually contribute to the achievement of our national interests,” he emphasized.

During the send-off, Duterte signed a proclamation declaring parts of the Philippine Rise as marine protected areas.

The United Nations in 2012 ruled that the Philippine Rise was part of the country’s exclusive economic zone, which gave the Philippines “sovereign rights” to explore and exploit the resources in the area. (davaotoday.com)