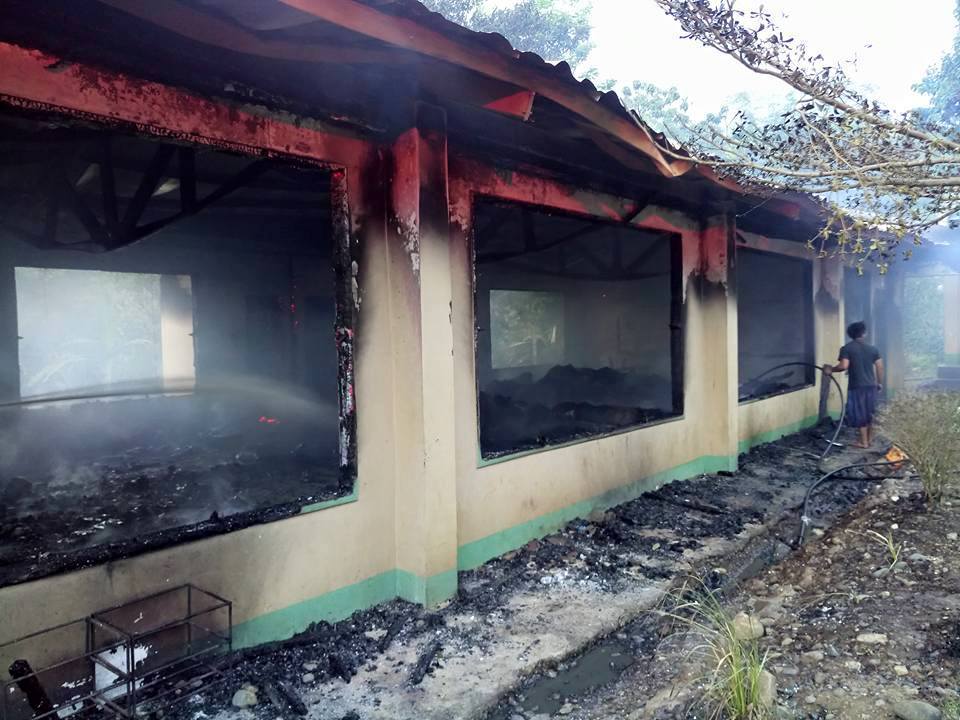 This photograph of a burnt school building in Concepcion National High School circulated on Facebook on March 29, 2017. (Photo grabbed from Facebook page of Katropa DWDD 1134KhZ am)

DAVAO CITY, Philippines (Second update as of 3:35 pm) — The head of the City Disaster Risk Reduction and Management Office of Valencia City, Bukidnon clarified that the school allegedly burned by the New People’s Army was actually gutted due to short circuit.

June Ray Valero, head of the CDRRMO told Davao Today that based on the  initial investigation of the Bureau of Fire Protection, wires short circuited at the Concepcion National High School.

He said witnesses saw smoke coming from the side of the library where the appliances such as the television and cassette player were located.

The school building where the library and faculty room were totally burned with damage costs estimated at P160,000. Citing the BFP’s report, he said the fire started in the classroom just beside the school library.

The school, located in Barangay Concepcion, is 17-kilometers away from the fire station. The fire started on Sunday, March 26 at 4:35 pm and was declared a fire out at 7:03 pm.

Mary Jean Subayco, Junior high school English teacher, said contrary to reports that circulated on social media, there were no armed NPA guerrillas who went to their school to get a cut from the feeding program.

Subayco belied such claim because public secondary high schools do not have feeding program.

She said in her three years of teaching, there were no instances of presence of guerrilla fighters in their school.

Valero added that he asked the Department of Education when the building was built since the structure is similar to the central elementary school built in 1960s.

He said DepEd informed him that the school was last repaired in 2005. The windows, he said, are still made of wood.

“There is really a chance that the wire will get brittle,” he said. Valero added that some of the materials were taken outside by residents to save it from the fire.

Valero said they have not yet talked with the Army officials who blamed the rebels for allegedly burning the school.

“The information I got from the arson investigator is that the Army probably connected the incident to the NPA because it was their anniversary yesterday. Usually during their anniversary, they really have actions. But so far, the BFP’s investigation found that the residents saw no armed men,” he said.

“Even the barangay captain could not conclude that the NPA was responsible for the burning,” he said.

Photographs of burnt school buildings made the rounds in social media on Wednesday, March 29, coinciding with the NPA’s 48th founding anniversary. The photos allegedly came from the army’s 8th Infantry Battalion operating in the province of Bukidnon.

In a statement sent by the Army’s 8th IB through e-mail, it said “the rebel group asked their share in the fund which was intended for the feeding program for their pupils.”

“The teachers refused to give in to their demands so the NPA resorted to such terroristic acts. Without considering the effects of their actions to the civilian populace especially the students of the said school, the armed group burned a faculty room, one classroom and one library in the process,” the Army said.

The NPA had said in its previous statements that it imposes what it called “revolutionary taxation” to big landlords and big business operating in their territories.(davaotoday.com)