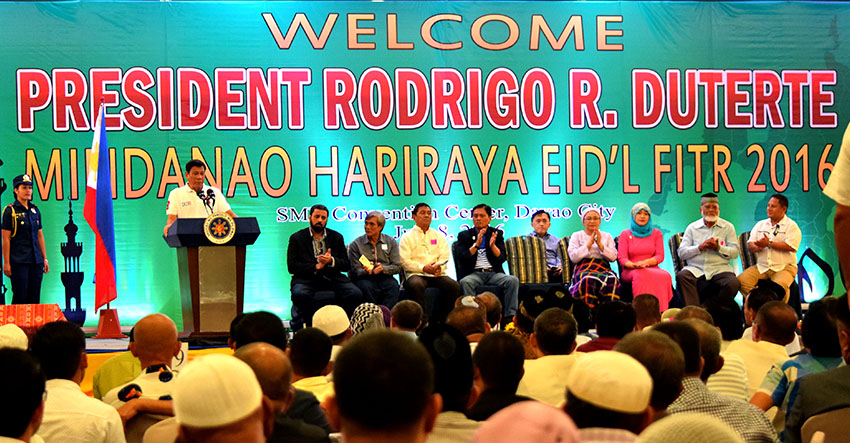 “Fasting is not just an act of worship, but rather it is characterized as an act of gratefulness to God and to glorify Allah (for) his guidance,” he said.

Munib added that the celebration comes as Muslims transform themselves to become a better person.

“To be a God-fearing person, we are celebrating because we have graduated in the school of Ramadhan,” Munib said.

“We should continue transforming ourselves to be a better Muslim, to be a productive Muslim. That is the very essence of Ramadhan, spiritually and socially,” he added.

The event was also graced by President Rodrigo Duterte, who is the first President from Mindanao. Duterte arrived in Davao on Thursday night.

Duterte on Monday, July 4 has declared Eid’l Fitr, which is celebrated for three days after the end of the Ramadhan, as a regular holiday.

In his Proclamation No. 6, Duterte said the declaration “was necessary to bring the religious and cultural significance of Eid’l Fitr to the fore of national consciousness.”

During the pre-program, a message from acting City Mayor Paolo Duterte, the eldest son of the President, was read by Indigenous People Mandatory Representative Bai Halila Sudagar where he said that Davao is honored to host the feast gathering.

“Through the years the local government of Davao City has always been an advocate of brotherhood and understanding of peoples of different cultures,” the younger Duterte said in his message.

He said with the end of Ramadhan, Muslims are now “even more mentally, physically and spiritually prepared” to face challenges this year. (davaotoday.com)