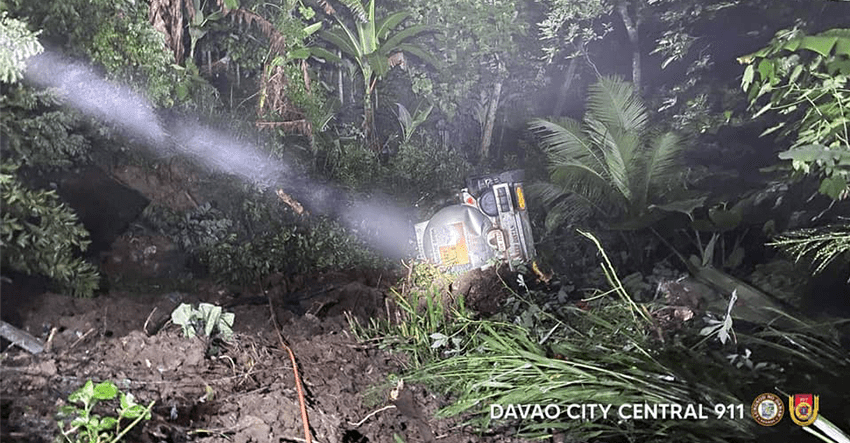 DAVAO CITY, Philippines — The waters in Davao River and its tributary Suawan River was found by authorities to be contaminated after a trailer truck carrying hazardous chemical fell 50 feet off a cliff in Barangay Suawan in Marilog District late Monday, August 1.

Caustic soda or Sodium hydroxide (NaOH), according to ChemicalSafetyFacts.org, is “a highly versatile substance used in a variety of manufacturing processes. Sodium hydroxide is a co-product of chlorine production.”

Caustic soda or lye has strong corrosive qualities and exposure to it can cause skin and eye irritation. Contact to high concentration can lead to severe burns to the digestive system or lungs, which can result in permanent damage or death. Prolonged or repeated skin contact may also cause dermatitis and repeated inhalation of its vapor can lead to permanent lung damage.

The CDRRMO warned all villages “to advise and alert” the public not to swim from Suawan River to Tamugan River going to Davao River due to the chemical spill.

During the investigation, Baluran said there were sightings of dead fishes in the river and there is a possibility that chemicals spilled downstream reaching as far as the Davao River.

“In our investigation, there were dead fish in this tributary river. It’s dangerous. If you see dead or weakened fish, you cannot catch and consume them because it might affect your health,” he said during the radio interview.

The Bureau of Fire Protection recovered most of the chemicals. He added the Department of Environment and Natural Resources-Environmental Management Bureau is currently conducting a water sample to determine the effects of the chemical spill in the area.

The August 1 accident resulted to the death of the truck driver and injured another. (davaotoday.com)