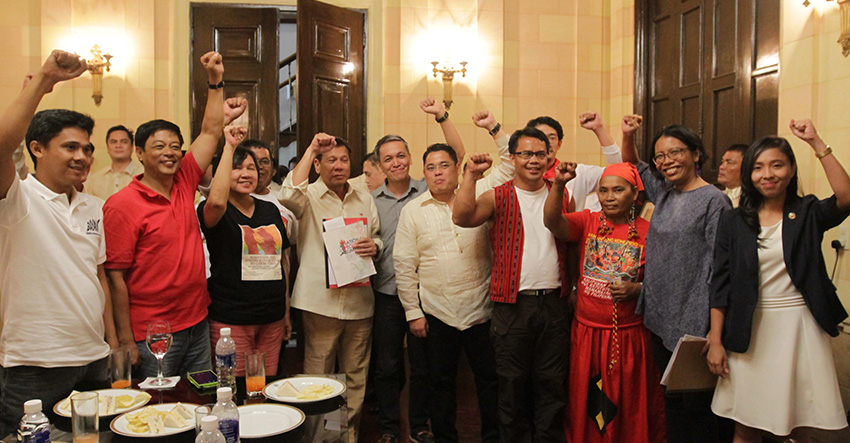 It was a rare occasion for members of the Bagong Alyansang Makabayan who were usually barred by police authorities during their rallies near the Palace.

Bayan submitted their version of a “People’s Agenda for Change” to the new President and talked to him for 40 minutes at the Osmena Hall.

Renato Reyes, Jr., secretary general of Bayan, said that they were fetched by the Presidential Security Group in Mendiola, while their rally of support for the new administration was still ongoing.

Reyes told Davao Today that “there were no costume changes.”

“We entered Malacanang in our usual attire, walking past guests who were in their best formal wear,” he said.

“We were warmly welcomed. The meeting was very cordial and informal,” Reyes said.

“He opened the agenda, looked at it and said that this will not be their last talk,” Reyes said.

The People’s Agenda which was drafted during the People’s Summit on Wednesday, June 28, at the University of the Philippines Diliman Film Institute. It focused in five points which are Economic Development, Good Governance and the Fight Against Corruption, Social Policy, Peace and Human Rights, and Foreign Policy.

The Mindanao People’s peace agenda drafted by different people’s organizations in Mindanao and was also presented to representatives from Government of the Philippines Silvestre Bello III and National Democractic Front of the Philippines Fidel Agcaoili during a peace activity here dubbed “Pukaw Kalinaw:Unity for Justice and Lasting Peace” on June 28.

Bello and Agcaoili said that they are going to study the presented peace agenda.

Anakpawis Partylist Rep. Ariel Casilao and Labor Undersecretary Joel B. Maglunsod, who were at Duterte’s inauguration earlier, were also present during the dialogue of Duterte and the activists.

Reyes said that they discussed a wide range of issues, including “contractualization, destructive mining, ancestral lands, land reform, the release of political prisoners on humanitarian grounds, and increasing the budget for health services and to education.”

“He (Duterte) is a firm believer of the principle of land to the tiller,” Reyes said.

The militant leader also said that they have been told by Duterte that he respects freedom of speech and the right to peaceful assembly.

“I asked him if this meant that we can hold our SONA (State of the Nation Address) rally closer to Batasan. He said it shouldn’t be a problem,” he said.

Reyes told Duterte that it was their first time inside the Palace.

“We are usually barred from crossing the barricades at Mendiola,” he said

He said it was also the first time for them to see a President raising his fist when they posed to have their pictures taken.

“He was the first to raise his fist, and we followed his lead,” he said.

The militant leaders were also told that Duterte wanted peace and national unity to be his legacy and said that he was serious about finding a solution to end the armed conflict. (davaotoday.com)