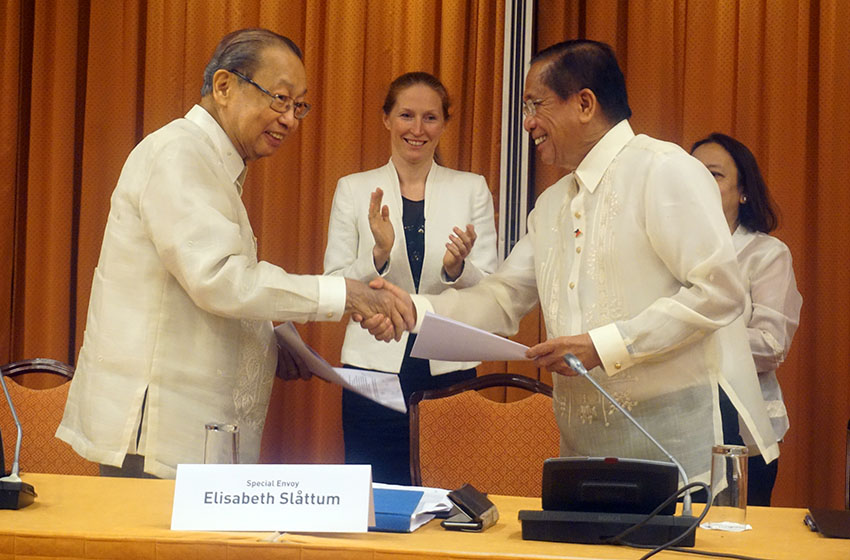 NOORDWIJK AAN ZEE, The Netherlands —The fourth round of peace talks ended on a positive note to pursue free land distribution, amid snags admitted by both the negotiating panels of the Philippine government and the National Democratic Front of the Philippines.

Both Parties have agreed to accelerate the forging of the Comprehensive Agreement on Social and Economic Reforms that will provide, among others, for the free land distribution to farmers in the pre-dominantly agricultural Philippines.

Davao Today sources from the GRP said it targets one million hectares for distribution to distribute at least 3 hectares per beneficiary. It also plans to allocate P200 billion pesos to buy lands from big and small landlords.

“We came to this fourth round of formal talks determined as ever to push the forging of substantive agreements on basic reforms, specifically CASER so that we in the NDFP and the GRP can firmly address and redress the chain of issues that lie at the roots of the armed conflict,” he said.

Under this round of talks, the reciprocal working committees on Social and Economic Reforms (RWCs-SER) exchanged their comparative “color-coded” matrices which identified the contentious provisions and those that are acceptable in principle to both Parties.

NDFP peace consultant Wilma Tiamzon said this agreement was never worked on by the previous administrations.

Tiamzon said the NDFP is pushing for fundamental reforms on the situation of the farmers in the countryside.

Before the closing ceremony, the parties signed a document which lists the highlights of their talks in Rome, Italy in the previous third round.

Among the highlights is the acceleration of the negotiations on SER through the formation of the bilateral teams that will meet at least once a month to supervise the work on the sections on the ARRD and the National Industrialization and Economic Development (NIED).

The bilateral teams, which will have three members each, agreed to hold meetings in Manila, in the Philippines or in any venue agreed upon by both Parties.

The Parties also set the following schedules for the accelerated negotiations on SER.

• May 4 – Meeting of the NIED bilateral teams

• May 20 – Exchange of draft minutes of the fourth round of the RWCs-SER bilateral meetings.

In the next round of the formal talks on May 26 to June 2, the Parties will come back here to discuss the remaining items under the ARRD, NIED, environmental protection, rehabilitation and compensation and the outputs of the bilateral teams.

The parties also hammered out an agreement on an interim joint ceasefire (AIJC), which aims to “encourage the forging of a more stable and comprehensive Joint Ceasefire Agreement and provide an enabling environment for the eventual and early signing” of CASER.

In his closing statement, GRP Chief Negotiator Silvestre Bello III said the agreement is a “significant milestone in the peace process given the divide that has characterized it for decades.”

Bello commended the flexibility of both panels to address the issues they were confronted with.

“We shall need the same flexibility when we discuss and agree on the implementing guidelines and mechanisms for the interim joint ceasefire,” he said.

Agcaoili said they have decided to “exercise maximum flexibility” as they worked with the GRP on the AIJC. He said the ceasefire committees will not have a “walk in the park” as they flesh out the mechanisms for the interim joint ceasefire agreement.

The AIJC was signed by the Parties on Wednesday, April 5.

Presidential Peace Adviser Jesus Dureza said even when a ceasefire has yet to take effect, the Parties already agreed to designate Bello and Agcaoili to ensure a peaceful environment conducive to the continuation of the peace process. (davaotoday.com)