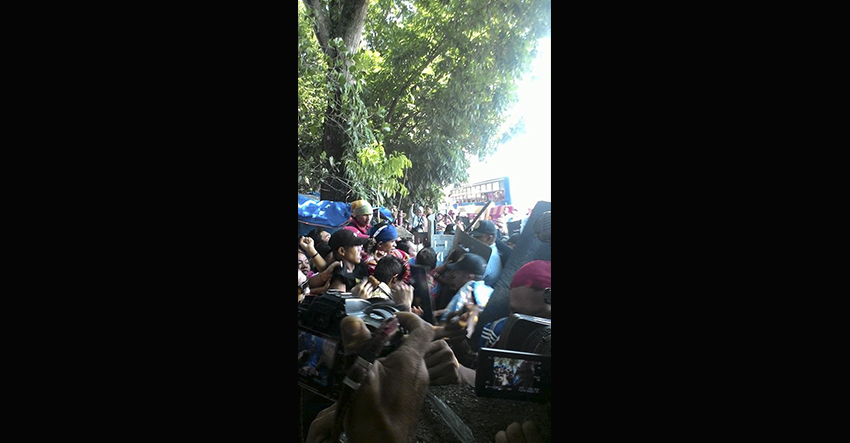 POLICE. Davao police force their way inside an evacuation camp in a church compound in Davao City. (Paulo C. Rizal/davaotoday.com)

Children cramped in a small hall cried out of fear inside the United Church of Christ in the Philippines Haran compound located along Father Selga Street.

In news reports, the police alleged that the IPs are hiding dead bodies in the compound.

Kerlan Fanagel, spokesperson for Pasaka Confederation of Lumads said the police have no basis in their allegations.

In an interview with Pedrita Demaquiling, head of the Community Based Service Unit of the Department of Social Welfare and Development, she said they will not “rescue” the women and children because they respect the culture of the lumads after a negotiation with the Datus.

However, right after the interview the police forced their way by breaking the gate.

Elder lumads who tried to block the police were hit with truncheons on different parts of their body.

A lumad elder only identified as Datu Benito, who is in his late 50s, sustained hand and head injuries.

Benito in a radio interview said the Davao police is no different from the military attacking their communities.

The incident also disrupted the ongoing classes of the children.

Datu Kailo Bontulan said the DSWD recognized that they can do nothing about the militarization of their communities.

“How can the problem be solved without solving the roots? It’s like cutting the branches but not killing the roots,” said Bontulan. (With reports from John Rizle Saligumba)