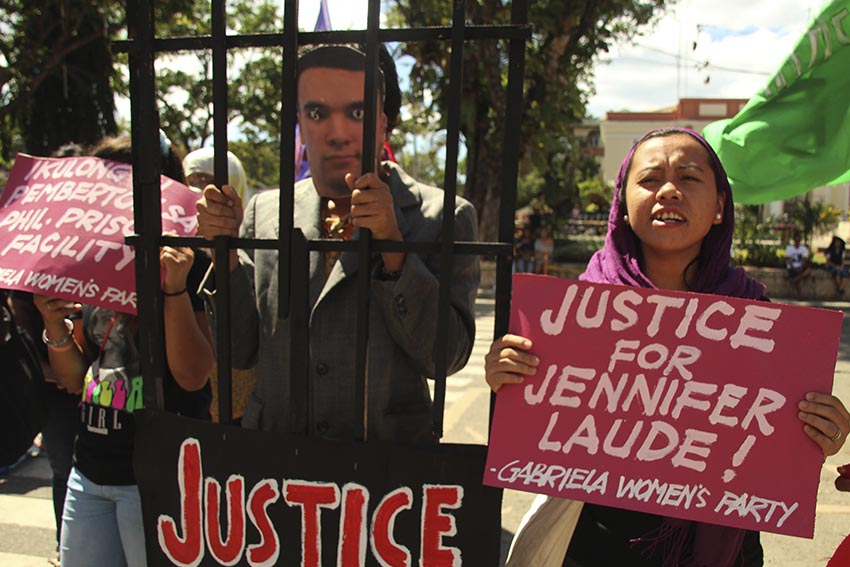 In this file photo, members of Gabriela Davao and Gabriela Women’s Party staged a so-called Black Friday rally in front of the Davao City Hall to show their disgust over the refusal of the US government to turn over US Marine Lance Corporal Joseph Scott Pemberton to Philippine authorities following the guilty verdict by the court for killing Filipino transgender woman Jennifer Laude. The protesters also called on the Philippine government to junk the Visiting Forces Agreement. (Medel V. Hernani/davaotoday.com)

In a statement, Anakbayan Secretary General Einstein Recedes said Duterte has continued its “subservience to the US imperialist agenda by actively allowing the presence of American troops in the country which is a clear affront to the national sovereignty.”

The opening ceremony of the 34th Balikatan Exercises was held on Monday, May 7 at the Camp Aguinaldo and led by Defense Secretary Delfin Lorenzana, US Ambassador Sung Kim, and AFP Chief of Staff Gen. Carlito Galvez.

“The Duterte regime is a complete US flunky for allowing American troops to use our lands as playing field for their war games that do not benefit the Filipino people,” Recedes said.

Around 5,000 Filipino troopers and an estimated 3,000 American soldiers will join the amphibious assault drills set to commence on Wednesday in San Antonio, Zambales.

The drill will culminate on May 18.

For its part, the women’s group Gabriela also denounced the conduct of Balikatan exercise, saying it will only result to the generation of new “comfort women” in the country.

“We fear the rise of a new generation of ‘comfort women”.” We fear the rise of military sexual slavery and other forms of abuse against Filipino women by foreign troops under the so-called US’ Operation Pacific Eagle,” Gabriela Secretary-General Joms Salvador said in a statement issued on Monday.

The continued presence of US forces in the country also spawned the rise of the sex industry particularly in areas where US facilities are situated.

“The Balikatan exercises, likewise, not only trample upon Philippine sovereignty by transforming the country into a theater for the US’ so-called war against terrorism. It potentially spells another Marawi for other parts of the country and drags the nation into a perilous situation as the US-China military conflict intensifies,” Salvador said.

She said, “The Duterte government now wants us to simply forget not only by spreading the false information that Japan has already apologized to the victims but also by removing any remaining symbol of these atrocities with the recent removal of the ‘comfort woman’ statue on Roxas Boulevard.”

The most infamous cases involving US soldiers were the murder of Jennifer Laude, and the rape committed by Daniel Smith against ‘Nicole’.

Anakbayan condemned Balikatan for threatening to destroy the livelihood of affected communities.

“The US-Duterte regime is foolishly masquerading the Balikatan as a goodwill exercise, but in actuality, it is about enhancing mutual capabilities to launch operations that destroy the livelihood of entire communities and violate their rights, just like what they did in Marawi in line with the US’ war on terror,” Recedes said.

He also lamented against the continued adherence of the Duterte administration to the Enhanced Defense Cooperation Agreement or EDCA.

The agreement, the group insisted, is a “clear part of the ‘pivot to Asia’ geopolitical strategy of the US to strengthen its foothold in the region amid rising threats to its hegemony posed by China and Russia.”

Anakbayan scored the construction of military facilities under EDCA in the areas of Basa Air Base in Pampanga, Nueva Ecija, Misamis Oriental, Palawan, and Cebu.

“In exchange for loans and support to his war on drugs and fascist dictatorship, the US-Duterte regime has willingly made the Philippines a pawn of the United States to contain China, putting the country at a potential risk of being caught in a war between the rival imperialist nations,” Recedes said.

“We reiterate the call to abrogate Balikatan, EDCA, and all other existing lopsided military agreements with the US, and enjoin the youth to intensify the fight against foreign intervention and exploitation by forwarding the national democratic revolution with a socialist perspective,” Recedes concluded. (davaotoday.com)