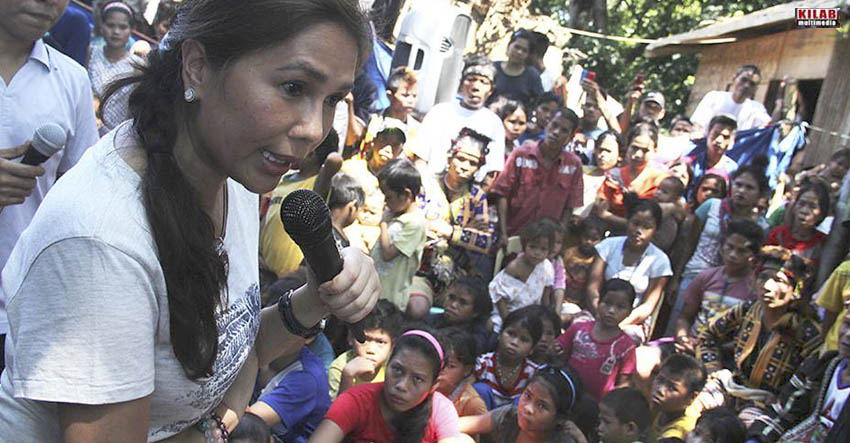 DAVAO CITY — Leaders of lumads who evacuated to Davao City starting May because of alleged Army harassment in their areas said a legislator insulted their leaders, deceived them into a dialogue and are forcing them to go home despite threats in their lives.

“We were happy to learn that she will be visiting us and will bring along the NCIP (National Commission on Indigenous Peoples) so we can have a dialogue, but she deceived us. She brought along the military not thinking how we would feel,” said Datu Kaylo Bontulan, a leader of indigenous people group Salugpungan Ta’Tanu Igkanugon (Salugpungan).

Bontulan said Second District Representative Nancy Catamco appeared before their evacuation center in Haran compound of the United Church of Christ in the Philippines in Davao City Tuesday.

“But we did not agree on bringing the military and other agencies. She violated our agreement, she deceived us,” said Bontulan in a press conference afternoon of Wednesday, after a series of dialogues initiated by Catamco failed.

On Wednesday morning, Catamco arrived with Army officials and officers of the NCIP, the Commission on Human Rights and the Department of Social Welfare and Development.

“I want to listen to the people,” said Catamco holding the microphone inside the Haran compound.

Catamco randomly picked from among the crowd and gave them the microphone.

Two of those she handed the microphone said they “want to go home” and that they be assured “that the military will not lay a hand on us.”

Many raised their hands.

Leaders from the three groups of Lumads wanted to interrupt while Catamco went on to offer those who raised their hands a bus ride and food packs.

Asked what he thought about the then ongoing dialogue, he sat in a plastic chair, took a deep breath and said “we cannot go home without being assured of our security.”

“Too many fell victim to atrocities of the military. They must leave our communities,” he said.

Bayan Muna Representative Karlos Zarate approached Catamco to suggest that a separate dialogue with leaders be done instead.

Catamco agreed and arranged for a venue in a nearby hotel while her staff were giving away school bags.

The dialogue proceeded in the afternoon only to end by a walkout by the Lumads and both parties calling for separate press conferences.

Catamco with the Army officers and government agency heads and representatives remained at the hotel while Zarate and Gabriela Partylist Representative Luzviminda Ilagan joined the Lumads in a separate venue.

“It was a fiasco, not a dialogue,” said Ilagan who helped Catamco talked with the Lumads.

Ilagan said she and Zarate reminded Catamco that ground rules should be set in a dialogue.

“Rules have to bet so each side can be given time to speak. We were supposedly there to listen,” she said.

“Each of us was there because we had the intention to help, but this not the way a dialogue should  be done,” said Ilagan.

“The dialogue in the morning failed as the Lumads were not comfortable with the presence of the military who they say threatened and harassed them in their communities,” she said.

Ilagan said “those from the government agencies were also caught off-guard.”

“The Lumads were asking these agencies what actions they have done with the Lumad’s situation,” she said.

Zarate, meanwhile, said he told Catamco that, “it is important that we always consult the Lumads and that we in the end respect their decision.”

“When I spoke in the dialogue that even us in Congress cannot dictate the Lumads to go home just because they are dirty she was apparently slighted,” said Zarate.

Zarate said he made it clear to Catamco that they cannot make quick results and that he suggested a “timeline” for it.

“The Lumads repeated to her that if they are made secure, they will go home and she said that what the Lumads want like the pullout of the Army is not possible right away,” he said.

Zarate said Catamco balked at him and said “why are you answering my question? It is not you I asked.”

Zarate said he understands the “emotional” stage of Catamco.

“We are both members of Congres and she probably has good intentions, in fact we all wanted a quick solution but the security of Lumads must have a solution as it was not solved in previous dialogues with Mayor (Rodrigo) Duterte,” he said.

Datu Mintroso Malibato, Karadyawan spokesperson, said since the dialogue in the morning “Catamco questioned us as leaders of the community and have cut us short in our speech.”

“She did it again in the afternoon. She only wants to listen to herself,” Malibato said.

Datu Jimboy, chairperson of Kasilo, said “we hoped that she can help us make the military be accountable to what they did to us, but she was the one who spoke for them.”

“She was forcing us to say that we must go home no matter what but she did not ask the (Army) generals when they would pull-out their soldiers from our communities,” he said.

Datu Jimboy said “she kept on repeating her point that we should go home so we walked out of the dialogue.”

Benito Bay-ao, a Salugpungan Council member said “what she (Nancy) did to us is deception.”

“We are happy that she is here because she is also a Lumad, but he called us dirty and in the dialogue she harassed us like what the military did to us,” said Bay-ao.

Bay-ao said “her feelings for us Lumads is not real.”

“What we asked is that we Lumads not be armed and the soldiers be pulled-out from our communities. We were peaceful before they came,” he said.

“She has taken our voice like what the soldiers are also doing. She is a lap dog of the military,” said Bay-ao.

“Nakaminos gyud na siya sa amoa (she is looking down on us),” he said.

“Maybe she wants to ake credit in solving our problems as a Congresswoman. We would put her in high esteem if she solve our problems even if she is not in congress anymore,” said Bontulan.

“We do not want to face such Congressmen anymore who is clearly biased,” he said.

In a press conference, Catamco said “we want to tell the IP leaders that the government is ready.”

“If the soldiers has committed violations, let them undergo a process. All I want is to bring them home,” she said.

Catamco said she was “full of anger,” and is “emotionally desperate” because of the situation of the Lumads in Haran.”

“I cannot bear in my conscience that I will go back to Manila while this is their siutation, that I have done nothing,” she said.

Catamco said  that she has been successful in other IP areas with the same situation “because there is no support group.”

She said she would file a resolution before congress “that the IPs will be sent home or else the civic organizations will answer for it.”

Bontulan, however, said “we are not open to her anymore.”

“We do not want to talk with such congressmen who has clearly taken sides,” he said.