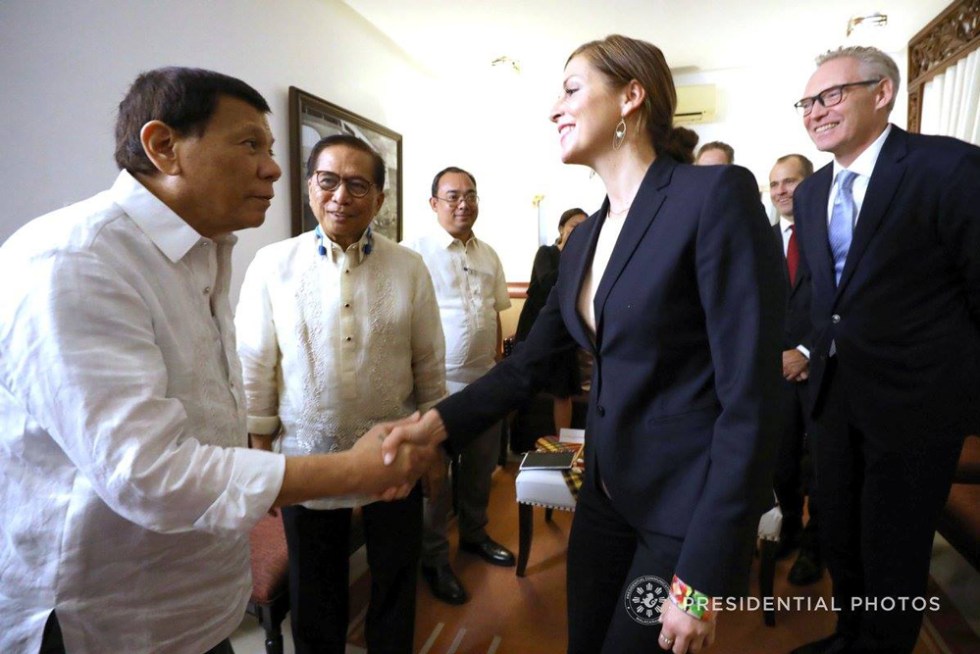 President Rodrigo Duterte welcomes Norwegian Special Envoy to the Peace Process Between the Government of the Philippines and the National Democratic Front of the Philippines Idun Tvedt as the latter paid a courtesy call on the President at the Presidential Guest House in Davao City on February 15, 2018. Also in the photo is Presidential Adviser on the Peace Process Jesus Dureza. (PRESIDENTIAL PHOTO)

CAGAYAN DE ORO CITY, Philippines – A church leader and peace advocate has expressed optimism that the meeting between President Rodrigo Duterte and a Norwegian official on Thursday could pave the way for the resumption of the stalled peace talks between the Philippine government and the National Democratic Front (NDF).

Citing the series of offensive attacks conducted by the New People’s Army, the armed wing of the NDF, against the military in the past few months, Duterte cut off the peace negotiations with the Communist rebels last year.

Shortly after he assumed into office, Duterte made good on his campaign promise to continue the peace process that was terminated during the Aquino administration.

In 2017, both panelists from the government and NDF made headway when they resumed the negotiations in Norway, the Netherlands and Italy.

The talks were on the fourth round when Duterte pulled out the government representatives from the negotiating table.

​It was the farthest that the peace negotiations went so far in decades.​

But Bishop Felixberto Calang, of the Iglesia Filipina Independiente and co-convenor of the Philippine Ecumenical Peace Platform (PEPP), said the meeting between Duterte and Idun Tvedt, the Norwegian special envoy to the peace process, could be a sign that the government wants to revive the negotiations.

PEPP has been acting as a third-party facilitator to the peace efforts and has been on the frontlines in assisting the release of police officers and government soldiers held captive by NPA rebels in Northern Mindanao region in the past years.

He said Duterte’s meeting with Tvedt is an “indication of [the President’s] willing to continue the talks [with the Communist rebels].”

According to the website of the Norwegian Embassy in Manila, Tvedt was appointed as special envoy to the peace process October last year.

The embassy said she replaced Elisabeth Slåttum, who just ender her three-year term as special envoy.

Norwegian Ambassador to the Philippines Erik Førner said Tvedt has a “high standing in the Norwegian Foreign Service and her knowledge and experience in peace and reconciliation matters are truly impressive.”

Despite the setbacks, Calang said he still believes that Duterte is still considering the peace talks as the best option to end the conflict, especially in Mindanao where the NPA has established a significant presence in some of the island’s provinces, particularly in the Caraga and the Northern Mindanao regions.

“I believe his (Duterte) passion for peace talks has remained the same,” the cleric said.

He said the talks, once resumed, will play an important role in addressing the various violations allegedly committed by both the state forces and Communist insurgents that have also affected the civilian population in areas where the fighting took place.

Calang said the talks will provide a venue for bringing out the grievances happening on the ground, most especially from the non-combatants who were displaced and those who reported of being victims of human rights violations.

Calang, who’s presently in Manila attending the PEPP meeting, said the group will also be meeting with Tvedt regarding the efforts of all parties involved in the peace negotiations sometime next week. (davaotoday.com)