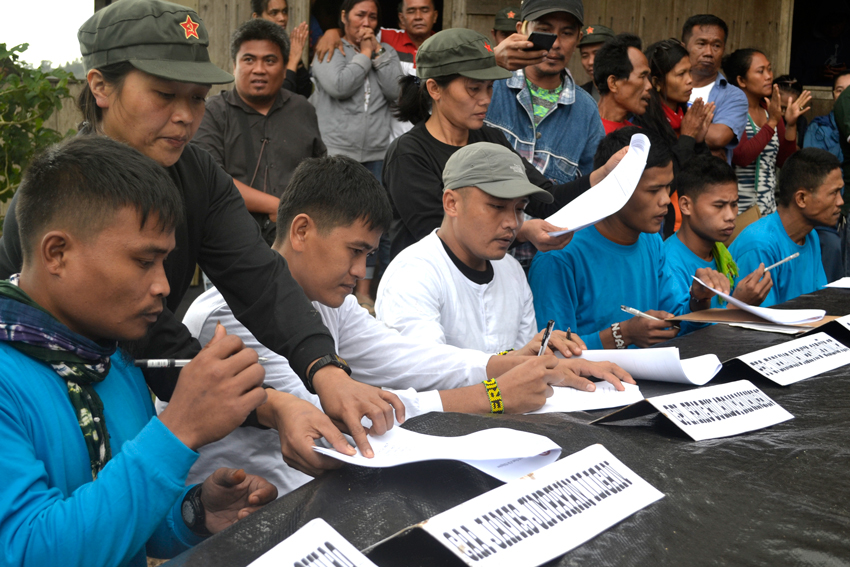 The eight were held as prisoners of war (POWs) after the NPAs launched a surprise attack on a military detachment in Barangay New Tubigon, Sibagat, Agusan del Sur last December 19.

Go told reporters that a friend of Sebastian who happened to be PFC Cariño’s cousin asked for help to facilitate the release of the captive troops.

Both Go and Sebastian expressed their gratitude to the rebels during the ceremony for their lenient treatment to the prisoners.

Aside from Go and Sebastian, the freed government troopers were also received by officials of the local government unit of Agusan del Sur headed by Governor Adolph Edward Plaza and church leaders who acted as third-party facilitators led by Sr. Emma Tersita E. Cupin.

The NPAs also released the other six militiamen last week in the same village.

A total of 16 troops were already released safely by the NPAs in Agusan province, the most number of captives held by the rebels in a series of attacks within a month last year.

NPA’s head of the custodial unit, Ka Arina Magdiwang told reporters that the release is in response to the appeals various parties and individuals “who expressed support for a negotiated settlement on the issue of prisoners of war.”

Magdiwang added that their release is in compliance with the peace accords and international humanitarian laws.

A physician attended the prisoners prior to their release and stated that they are in good health.

The released troops expressed gratitude to their captors for the lenient treatment they received while being held POWs.

Ka Maria Malaya, spokesperson of the National Democratic Front of the Philippines-North Eastern Mindanao (NDFP-NEM), in a written statement read during the ceremony, stated that the release of Agusan 16 POWs “is a concrete measure of goodwill” on the part of the NDFP in support of the reopening of the formal peace talks.

The formal peace talk was stalled after President Rodrigo Duterte declared Proclamation No. 360 in November 2017. (davaotoday.com)