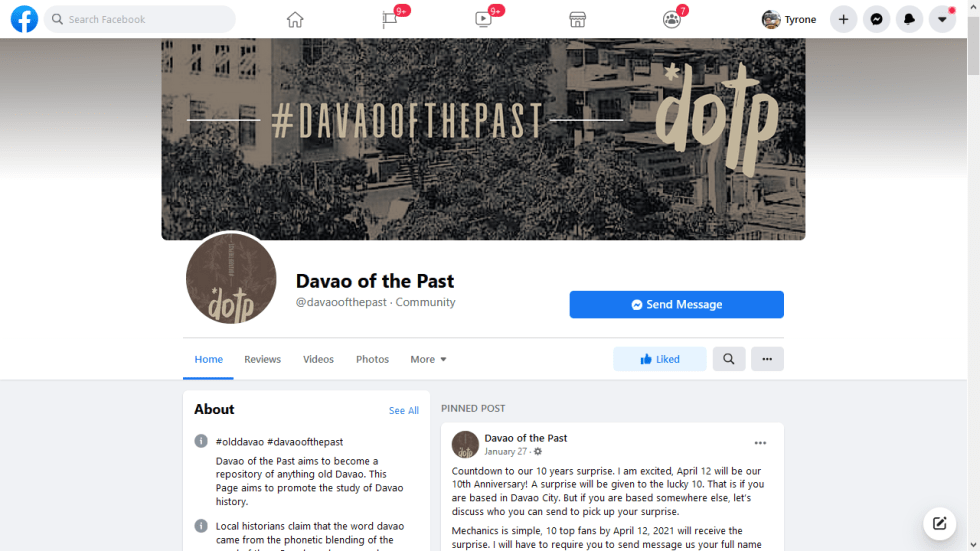 Screen capture of Davao of the Past’s current Facebook page.

When visual artist and graphic designer Paul Corpus migrated to Toronto with his family in 2000, he carried that longing to connect to his home that is Davao City.

There was Facebook at first. Then later, he had this interest of scouring the web for things about Davao.

“One time I wanted to start a business on eBay. So I was curious about old Davao images on eBay, I also looked for digital archives. I was disappointed as there was not much,” Corpus recalled.

While he found there are more archives about Zamboanga, Cebu or Manila, he thought someone should do the work for Davao.

This turned into a past time of scouring through photos and stories from archives online, articles and books written about Davao’s history. He also found other Dabawenyos sharing the same interest.

He had compiled so much of Davao history to fill up two albums, and he thought, why not start a page of old Davao?

Encouraged by friends, Corpus put up the Facebook page “Davao of the Past” in 2011 and later on a website, which is celebrating its tenth anniversary on April 12.

Davao of the Past is what he calls a “treasure trove” of photos, news clippings and articles of the memories of Davao City.

Davao City may be a young city, having been created in 1937, but its history and growth offers an interesting glimpse of diversity.

On its page and website Davao of the Past offers a glimpse of eras, of grey photos of the Lumad, Moro and other original settlers of Davao. There are photos from the American and early Japanese era that brought plantations, business and institutions. Images of war-torn Davao during World War II. The tumultuous years of Martial Law and Post-EDSA.

This treasure trove also finds grey or sepia toned photos of buildings, churches, hospitals and houses; streets that looked clean with AC jeepneys running around; and classic bulky old buses that once plied routes from Davao to provinces.

Davao of the Past website also compiled references to historians who had documented the early indigent settlers of the city and the early years of Japanese and American settlers. The page also shares columns by Davao historian Antonio Figueroa, who keeps his own page This is Davao History and writes for a local newspaper chronicling Davao history and trivia, one of them discussing the origin of street names in the city.

Corpus calls this work his “passion”, collaborating with Dabawenyos in the past ten years to research and compile the materials for the page and website. “I work on this in the early morning. Sometimes I lacked sleep doing this,” he said. “For me it’s a passion. It’s been ten years doing this without getting anything in return.”

The compensation he gets is the appreciation from fellow Dabawenyos and netizens who support the page, and from students who referenced the website for projects and thesis.

Corpus said that compiling these materials is more than just a nostalgia trip. What Davao of the Past offers, he said, is history, told not just by historians, but also by fellow Dabawenyos.

“History involves the whole of Davao. Everybody makes history in their capacity,” he said, noting that the page is crowdsourcing even for family photos as it is a link to the past. “Because you never know. They may not recognize it, like for example, churches, when they were established, that’s already a spot of history.”

“The tapestry of Davao culture and history, we are unlike other cities. There is just so much richness, from the Lumad, to the local and foreign migrants to the waves after waves of influx. And there are a lot of stories to tell,” said Corpus. 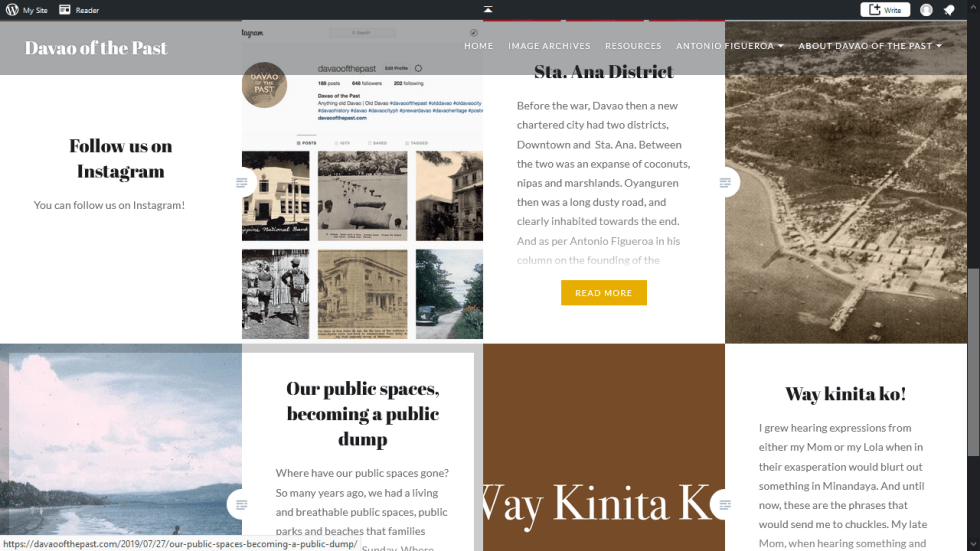 He also sees other pages have come up that is somewhat inspired by that idea of keeping history.

“What’s inspiring is there are pages that are inspired by it. Like Kidapawan of the Past, Brgy Bunawan of the Past, Titos and Titas of Davao, there are more pages getting historical materials in their respective communities. What I’d done is probably a tip of the iceberg. Just imagine more people scouring the net for archives, this page accelerated the gathering of such materials of old Davao,” he said.

Corpus hopes this website that stirred his passion will also be felt by institutions and Dabawenyos to support this endeavor. He looks forward to the next few years to put more of Davao history in digital. There are ideas of a digital museum or a simulation of digitally recreated Davao streets of the past. He notes that Davao City may have few heritage sites, but it has a history worth recalling.