A second of these series of Mindanao artists will be coming this August 15 to 29 for the exhibit entitled “Punla” (Seedling) in Gallery 9 in SM Megamall.

“Punla” will feature Kublai and three Davao artists from different backgrounds and media. Victor ‘Bong’ Espinosa is a seasoned painter who has made it to the international scene with murals and paintings with rich embossed textures in oil and acrylic. Pinx Gaspe is a comebacking artist with his new media of sculptures using recycled sawdust and styrofoam. Rounding up the group is newcomer Jag Bueno who will display his bas relief sculptures and portraits.

This exhibit comes after an earlier group exhibit this year spearheaded by Kublai called “Sibol” (Sprout) which introduced three art teachers breaking into Manila. “Punla” as its title symbolizes, finds the artists seeking new grounds by planting their raw vibrant Mindanao art of rich colors, textures and stark realities into the minds of the Manila art scene.

Kublai Millan is an internationally renowned artist who has made notable landmark sculptures in Mindanao such as the “Risen Christ” in the Tagum City Cathedral, the “Kampilan” in honor of Sultan Kudarat City, and the Durian Monument in Davao International Airport. A graduate of UP Fine Arts, he first broke in the art scene by converting his family’s hotel Ponce Suites into his art museum with mixed media works from art, photography to sculpture. He said he has found art and immersion in indigenous communities as a way of connecting to the roots of Mindanao and wants to share this to the world.

The three artists joining Kublai are homegrown Davao artists. John Paul “Jag” Bueno is a newcomer in the art scene in this decade, honing his skills from woodcraft figurines. His mentorship with Kublai Millan and Bong Espinosa hone his art as he evolved into making life-sized mixed media sculptures depicting Mindanao social realities. Bueno has since focused in making bas relief sculptures and portraits of the Mindanao common folk.

He credits his background in Assumption High School of Davao for his early exposure to the lives of the rural and urban poor areas, who are the subject of his bas relief portraits marked with color and expressive lines in the faces of farmers, workers, Lumad and Moro people. He is one of rising artists in the Davao art scene after joining group exhibits in the past years. 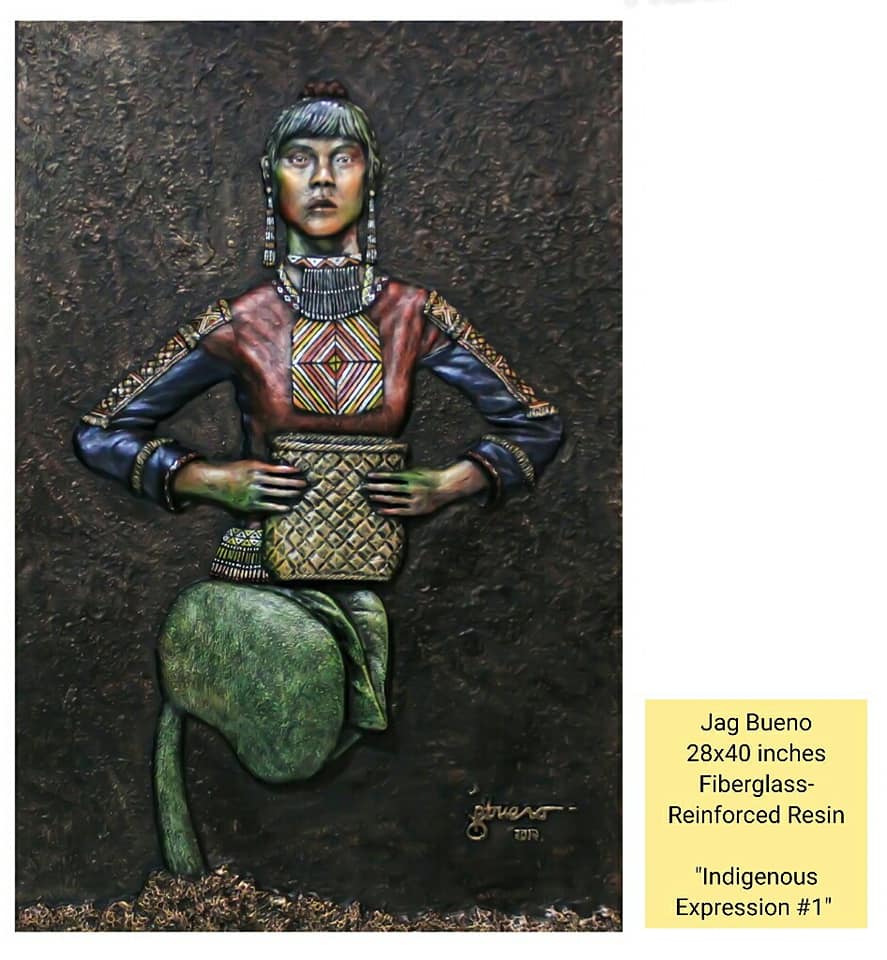 Ronald “Pinx” Gaspe has been in the art scene in Davao for decades, who was mentored by internationally renowned Davao artist Bert Monterona who exposed him to social relevant art. This influence led Pinx to be the first artist to exhibit works on HIV-AIDS awareness for Davao in the early 1990s, and carried this on as a member of the Lakbay Diwa group which figured in local exhibits for environment and indigenous peoples’ advocacies.

Seeing art as an expensive medium, he resorted to innovation and resourcefulness by using recycled materials in his backyard. He has mixed sawdust and styrofoam using adhesives added with a durable finish for his latest sculpture materials. His sculptures of the Lumad and Moro are imbibed with socially relevant themes of heritage, farm life, environmentalism and the pains of war. 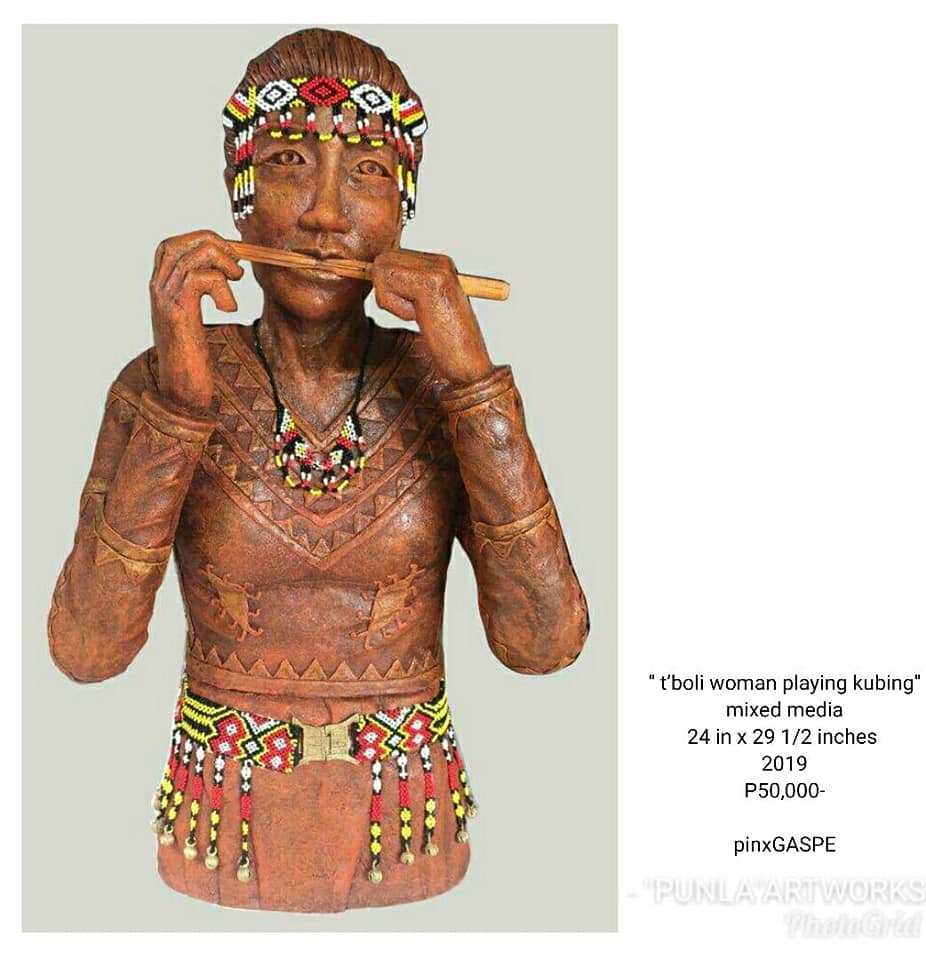 Locking in the new team is Victor ‘Bong’ Espinosa, a seasoned veteran who has mounted solo exhibitions from Davao, Metro Manila and USA since 2006. One of his US tour merited him the Asian Artists scholarship grant at the Vermont Studio Center in 2008. In 2010, he sustained Private Artist Residency Program in New Jersey through fund raising events.

An architecture graduate of University of Mindanao, Bong has art in his genes with his father, a commercial painter, mentoring him. He has developed his own style in mixed media, highlighted by spontaneous bursts of embossed colors and strokes. There is a harmonious effect to this style, very much like what makes up the diverse colors and groups of Mindanao. 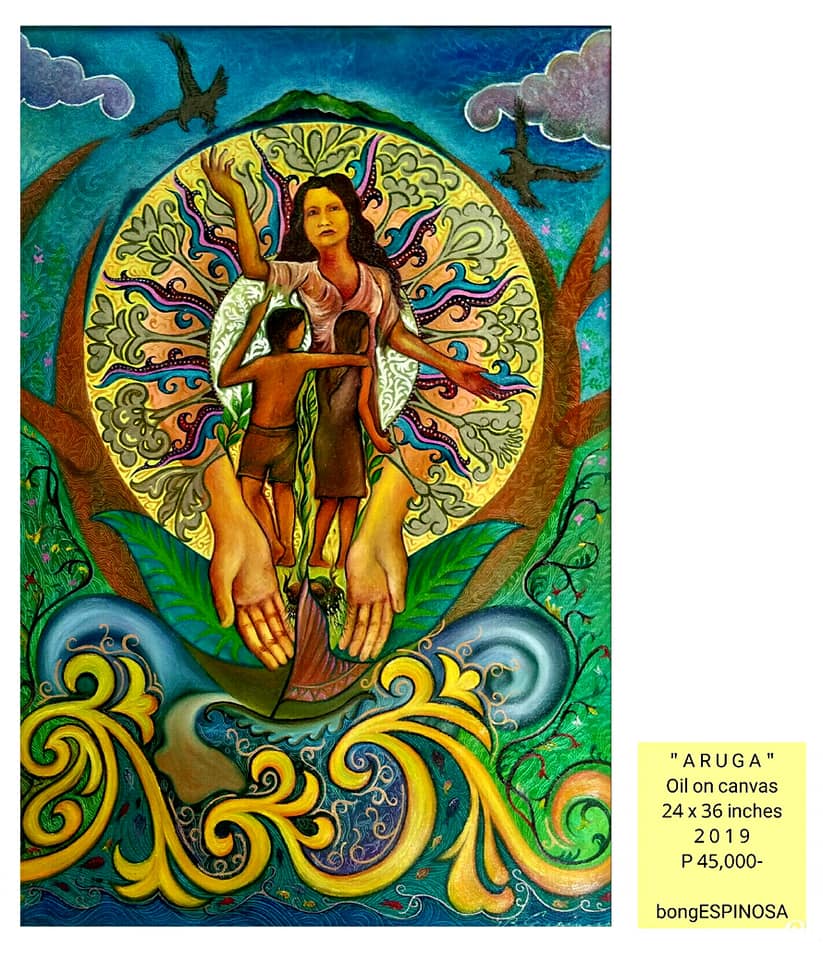 His mega-murals adorn the Ateneo de Davao University’s Community Center and University Chapel. Unlike other artists, he allows viewers to touch and feel the texture of his artworks. He believes his art is a way of preserving the culture and arts of Mindanao. (davaotoday.com)