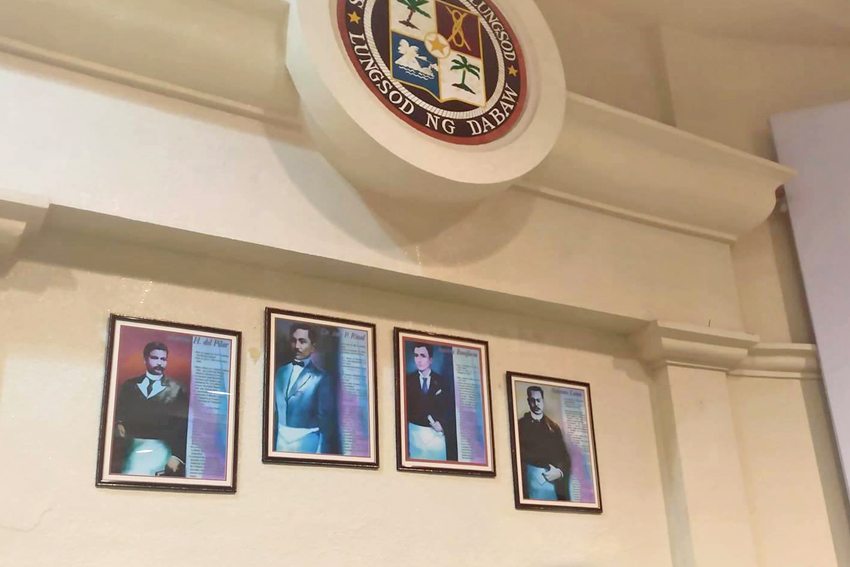 Sara and Paolo are the children of former Davao City Mayor who is now the Philippine president. The Duterte family has been in power for decades.

The photos of Marcelo Del Pilar, Jose Rizal, Andres Bonifacio and Antonio Luna were placed at the center below the emblem of the City Council.

Why were their photos taken down?

The Office of the City Mayor released a memorandum on October 9, encouraging departments and offices to display or exhibit photographs, paintings and other forms of visual representation of Philippine heroes “instead of photographs, paintings or other forms of visual representations of elected or appointed government officials.”

The memorandum of the city government was in compliance with a Memorandum Circular issued by Malacanang on September 15.

Memorandum Circular No. 25 directed all government agencies including government-owned or controlled corporations, state universities and colleges and public schools at all levels to display or exhibit photographs, paintings, or other forms of visual representation of Philippine heroes.

“The state shall provide the means to strengthen the people’s nationalism, love of country, and respect for its heroes by emphasizing the importance of Philippine national and local history in the daily life of the Filipinos with the objective of raising social consciousness and patriotism,” it stated.

The memorandum, does not, however, discourage the display of elected leaders in government offices.

In a statement on Wednesday, the vice mayor said the four are “freemason heroes.”

“We are celebrating the works of these Freemason Filipino heroes and the influence and inspiration that we draw from them as public officials,” the younger Duterte said.

He said he learned about honesty espoused by the heroes.

“Reaching our desired goals will never be fulfilling and rewarding enough if we step on others and refuse to respect their rights, if we break the rules and if we cut corners,” he said.(davaotoday.com)