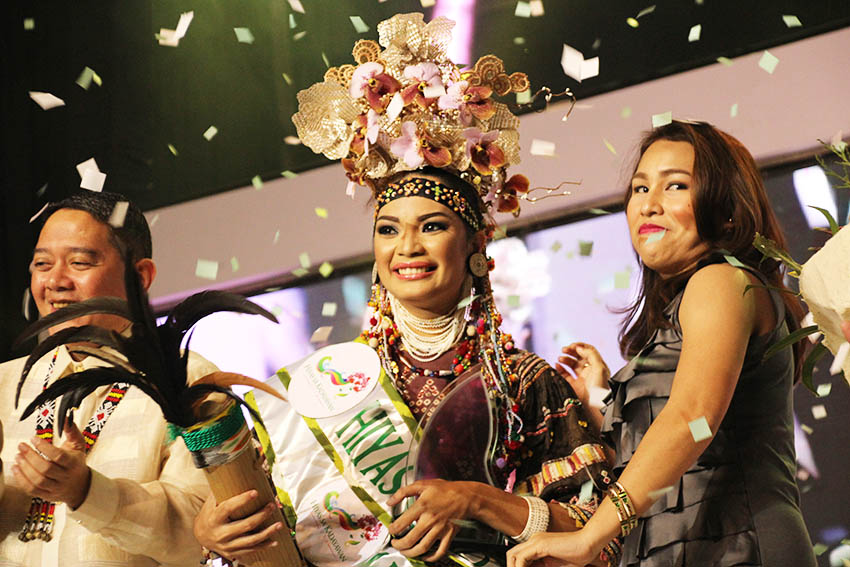 Garcia, a Business Administration majoring in Marketing Management student bested 10 other candidates from other tribes during the event held at the Davao City Recreation Center.

The other finalists were Hiyas sa Tingusbawan, Rachel Caputol of the Bagobo-Tagabawa tribe and Hiyas sa Kauswagan Mosrifa Hadji Sohair of Maranao tribe.

Garcia, who will receive P40,000 from the City government also received P10,000-worth of gift certificate from sponsors.

Garcia urged the government to look into into the issue of the Lumad people defending their ancestral domain.

“Ginahangyo nako among local na gobyerno, Non-governmental organization (NGO) or kung possible atong National na tabangan jud mi labi na financial support kay kinahanglan namo ni sa among tribu para sa among pakigbisog sa among katarungan (We appeal to the local government, NGO or if possible, to the national government to help us especially in financial support because we need it in our tribe to defend our rights),” she said.

She said that there are people who grab their ancestral land without asking permission.

In an interview, Garcia told DavaoToday that she will fight for their ancestral domain.

Garcia thanked the members of her tribe who travelled a long way just to show their support.

“Dako ni siya na tabang sa among tribu tungod kay dugay na kaayo namo ni ginapangarap na panahon, ug karon mahimo na jud nako akong adbokasiya para sa akong tribu (This will be a great help to our tribe because we are dreaming of this for a long time already and now I can already push through my advocacy for my tribe),” she said.

Garcia said that her advocacy is to focus on their ancestral domain and to promote their culture through their old traditional clothes.

The eight Hiyas sa Kaliwatan are Laira Lapitan of the Kagan tribe; Judy Ann Egay of the Ata tribe; Alyssa Casanguan of the Iranun tribe; Jenefer Sabuan of Matigsalug tribe; Norfaina Hamsi of the Tausug tribe; Jenielyn Palmero of the Obu-Manuvu; Fatima Tanjili of Sama tribe; and Norjaima Macalay of Maguindanao tribe.(davaotoday.com)