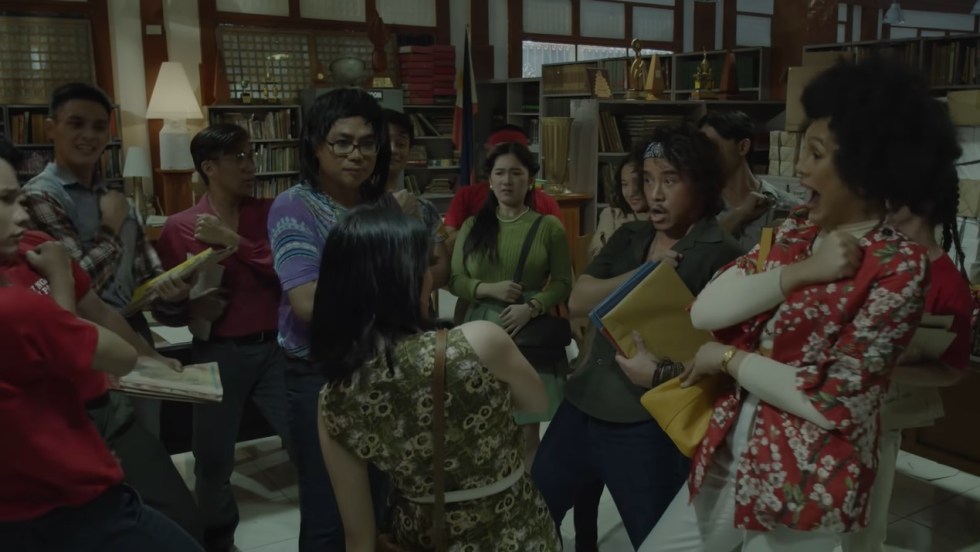 Katips is an adaptation of the award-winning musical launched in 2016, directed also by Attorney Vicente Tañada who appears on both stage and film versions. Screencap from PHILSTAGERS FILMS/YOUTUBE

Katips is riding on a big push after winning FAMAS Best Picture to go head to head with the Marcos “historical” film Maid in Malacañang both released theatrically on the same date of August 3.

We watched the movie on Thursday night and there were about more than a dozen people on the last full show. Even if it’s that few, there are people in Davao City who watched this film. Even if it’s that few, we noticed before entering the cinema there were five college-age youth ahead of our queue going to the other film. But the screen monitor for that film showed fewer audience.

If one thinks this is a historical film to counter the other film, this is not quite the film to do so. But it does not pretend to be a “historically accurate” film of the Marcos years like its counterpart.

Katips is an adaptation of the award-winning musical launched in 2016, directed also by Attorney Vicente Tañada who appears on both stage and film versions. It focuses on the lives of student activists where they expose Marcos’ propaganda through writing, defied the Marcos’ hold to power through rallies and strikes, and evade the state-imposed curfew as they run and blend in the night.

That the youth’s struggles are told through songs reminds us of Les Miserables, and as an adaptation of a stage musical, this film is quite challenging to stage and to watch. The staging of the rally in the film’s opening and later a strike scene looked more like a stage production. The camera work was dizzying, jumping from wide shots to close-ups, and some angles did not capture the intensity.

There was also a jarring scene as the cast transitioned from working late in UP’s Philippine Collegian that segued into a 70s disco romp complete with fake afro hair and outfits. Such scenes may be effective on the musical stage, but it was an overload on the widescreen.

As a musical, the story is told mostly through songs. One of its narratives revolves around the budding romance of four activist couples, with a good song sequence where they interconnect and intercut with lyrics. This is the highlight of the middle act.

But while the romance provides the kilig moments, the agit moments seem to portray activists in stereotypes. Activists here seem to be always angry. They raise their voice discussing world issues and Marcos’ lust for power. They curse when police disperse and bludgeon them in rallies. They curse when comrades die. One activist is turned into comic relief because of her thick Visayan accent. These scenes do not dispel the notion from people who have biases on activism. If anyone had talked or listened to First Quarter Storm veterans, you never lose your hearing as they never shout their words of conviction.

The movie barely tackles the legacy of Marcos. His name is even rarely mentioned, and is called by his nickname Apo. He becomes more of a symbol in this musical, and is compared to a mountain insurmountable.

There are texts flashing like old news headlines, of policies in the New Society, and a dance number of Metro Aide, a memorable symbol of Marcos’ call for discipline. If this is the movie to counter that other film, it missed such chances, and those texts seem to be intended as eye-openers to be discussed after viewing.

Who then is the enemy in this movie? It is the police who constantly appear to disperse their protests, red-tag them, scare them and brutalize them. They symbolize what Martial Law is. They are the law. The judge. The executioner. Such characterization was embodied well by Mon Confiado, whose eyes and surprising singing voice spew menace.

But what perhaps connects to the viewers are grief and the grim reality of state repression. When some activists were abducted, their torture scenes seem to be lifted straight from testimonies of Martial Law victims. Name every method and it gets shown here. Here, the film becomes art that disturbs those who had lived in the comfort that Martial Law brought peace and order.

That grief was encapsulated with the song manhid. While it symbolizes the numbness of death, and the numbness of loss, the lyrics also evoke that activists are never numb to the pain of a strongman plunging the nation into darkness. Thus, grief turns into courage.

But the film jumps ahead into the present, and somehow fails to show how the activists or the movement figured in People Power. There was one scene, the funeral march for Ninoy Aquino, that was inserted and it seemed that narrative came from nowhere.

The ending scene where the old activists reunite in Bantayog ng mga Bayani was filled with sentimentality, but it raises questions. Have these activists found closure? Where’s the connection with the present, when the old Marcos is buried in Libingan ng mga Bayani and another Marcos has taken the presidency? Isn’t history a continuing one, and not just one being displayed in museum glass pieces of newspaper clips and photos?

Perhaps Katips serves best as an eye-opener, a discussion piece to other movies and documentaries depicting the peoples’ struggles against the dictatorship. Even those who watched Maid in Malacañang can watch this for comparison, and vice versa.

Katips the musical is a sweep of the youth in action in the 1970s, a musical that stokes the emotion of passion, of sacrifice to one’s country. There is an enduring line in the last part that goes back to the insurmountable mountain of Marcos, where youth activists decide to scale other mountains, the fortress of their strength, to topple the tyrant. And that perhaps is the symbol of the struggles of our times.

JD Flores was a frustrated artist who now watches films after work.