Affected by the civil war between the government and Communist rebels and often becoming victims of various human rights violations, the Manobo indigenous people still decide to stay in the evacuation center at the heart of Davao for their safety and for accessing government services.

The leaders, however, say that since the day they evacuated government help has become increasingly elusive, with assistance usually coming from citizens’ groups that never left them.

The Lumad struggle started way back in 1991 when they had to fight the logging company Alcantara and Sons in the mountains of the Pantaron Range, under the leadership of Datu Guibang Apoga, known to be a great leader.

With the urgency to defend the Pantaron range, he unified the other village chiefs or datus against the logging concessionaire. The unity of the datus resulted in the establishment of the Salugpungan Tribal Council that became the unified system of governance among indigenous communities and their central body of decision-making, settling internal conflicts and preparing community defense.

When Datu Guibang surrendered to the military in June 2018, the whole Salugpungan Council remained and continues to lead the Lumad people in the evacuation center and in their ancestral land.

System of governance inside Haran

Datu Guibang’s decision to surrender came on top of the various problems faced by the Lumad in the evacuation center. Despite this, the elders’ leadership was unshaken. Datu Guinom Andil, Datu Guibang’s nephew, now leads the Salugpungan council along with around 30 datus and community leaders.

The Lumad in the evacuation center practiced democratic consultation and collective decision-making. Through these, the council along with its people agreed to continue the to fight for Salugpungan ta Tanu Igkanugon Community Learning Center (STTICLC) as an alternative school in their community. They stood firm in their decision to remain in the evacuation center despite all the cases of harassment and intimidation that they have been facing over the years.

“The tribe was not weakened by the loss of a single leader. Datu Guibang is just a part of the entire Manobo of Pantaron and led several battles for our ancestral land. This does not mean that we cannot continue the battle without him. We will lead our people in the path towards justice and peace,” Datu Guinom said. 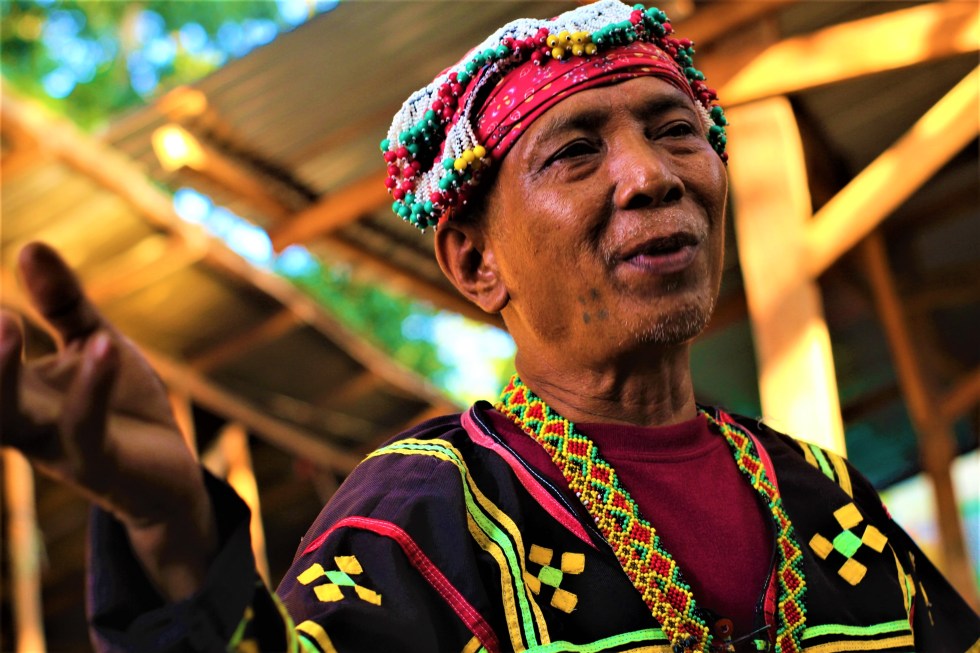 Datu Guinom Andil takes the position of Datu Guibang Apoga upon the Salugpungan council’s approval. He also came from Talaingod and is known as one of the staunch leaders of the Manobo tribe. (Kath M. Cortez/davaotoday.com)

Together with the tribal leaders in the Haran evacuation center, Datu Guinom, who hails from Talaingod, established committees for different tasks and responsibilities. Each committee is led by a datu to ensure that all concerns within the evacuation center are being addressed in an organized way.

The committee on agriculture is responsible for a backyard garden program to ensure the source of healthy food inside the evacuation camp. This committee also ensures the equal distribution of food to every family inside Haran.

They Lumad also have the committee on education which ensures that every child inside the evacuation camp will go to their alternative school to undergo the basic literacy and numeracy program. Aside from guaranteeing academics, the committee also ensures the teaching of Manobo culture and tradition to the young evacuees during free time. Datus are responsible for introducing the indigenous way of playing and hunting in the mountains as the way of keeping the young evacuees immersed in their own culture.

Another important committee in the Haran evacuation area is composed of a group of men that ensures the safety and security of all evacuees. They are also led by a datu and would take turns as watchers of the whole vicinity as well as gatekeepers.

Though some Lumad women, like Bai Bibiyaon Ligkayan Bigkay and Lorena Mandacawan, are part of the tribal council, they also have an independent organization inside the evacuation center to ensure that all women can participate in making decisions on the struggle and other issues inside the camp.

They established the Sabokahan-Unity of Lumad Women to amplify the voices of Lumad women inside the camp and in all indigenous communities in Southern Mindanao.

“The leadership of Bae Bibiyaon is the reason why women in the tribe have voices. With our significant role in the Lumad struggle, our organization wanted to develop courageous women leaders that can also protect our people against oppressors,” said Lorena Mandacawan, chairperson of Sabokahan and leader of Parents-Teachers and Community Association (PTCA) of the Salugpongan schools.

Women take responsibility for ensuring the health and cleanliness of the camp. They undergo trainings on basic health concerns as mitigation against possible diseases like cough, colds, and diarrhea, and their outbreak. They train mothers to use as alternative medicines the herbs that they can access in the vicinity.

They ensure that newborn children are being taken care off, provided with proper nutrition, and nourished with breastfeeding despite the lack of funds. They also partner with volunteer medical students in conducting regular health check-ups among sick children and adults.

“Women in the camp have a role of ensuring that our children live in a place that is out of danger. It is a good thing that some of us here worked before as barangay health workers in our communities,” said Jennilyn Baguio, Sabokahan secretary-general. 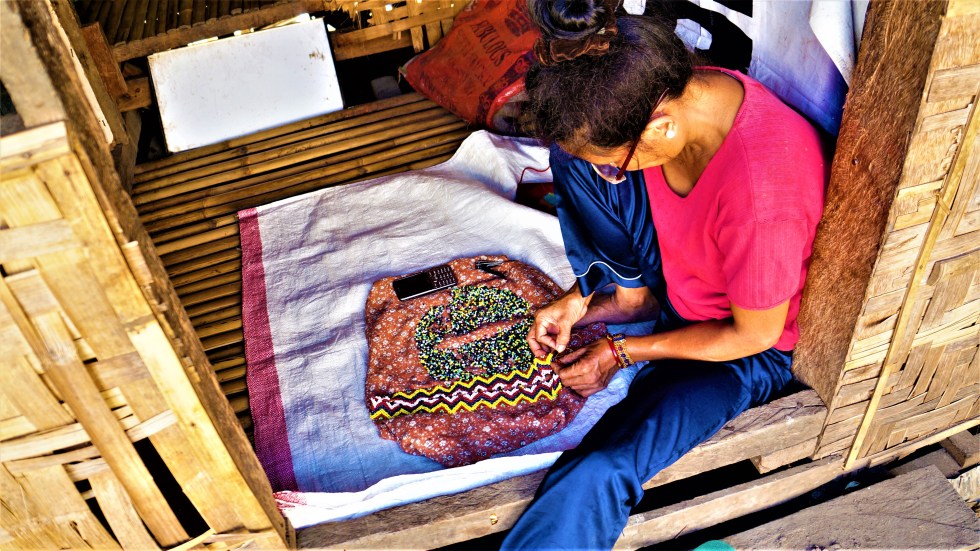 A Lumad woman who makes beautiful and colorful bracelets sits in her front door, trying to finish a piece before evening. (Kath M. Cortez/davaotoday.com)

Women also thought of making beads in order to gain an additional income. They make various sizes of women’s accessories like necklaces, bracelets, and earrings that they usually sell to visitors for a price of P100 to P300.

Beads-making is also one way to keep the Manobo culture alive inside the camp. Women ensure that children also learn how to make their own bead designs ased on their artistic and colorful traditions.

In some families, beads-making is also a family bonding activity where husbands also help their wives and children create accessories during free time.

The world of children evacuees

On regular weekdays, the entire camp is filled with young voices reading simultaneously what their volunteer teachers are teaching.

In a shanty made of bamboo walls and galvanized iron roof that is divided into four rooms, children can be seen solving mathematical problems, reading simple words, writing something on their notebooks donated by friends of their schools, or chatting to each other while waiting for their teacher’s next instruction. 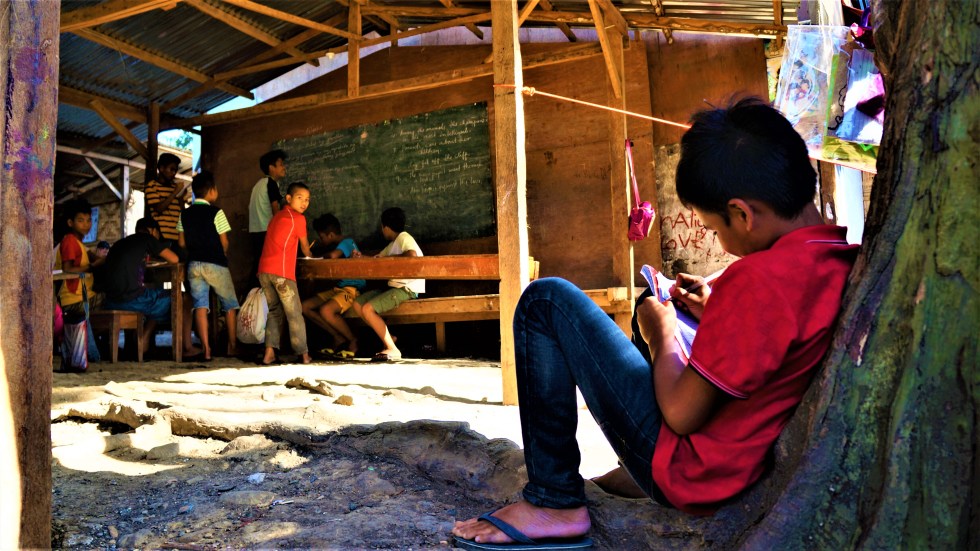 Due to limited chairs for students, a boy sits under a big tree while taking notes of the lesson for the day. (Kath M. Cortez/davaotoday.com)

Children have developed a way of staying focused on studying their lessons despite the poor learning environment. Due to insufficient budget for building proper classrooms, their schools are not conducive to learning. It is hot during noontime and water falling on the roof during rainy days makes a lot of sound.

The chairs are usually broken and are not comfortable to sit in. Some even sit on the ground just to attend their classes.

The students don’t have enough books to read for additional learning, except for the donated books inside their mini-library.

During their break, children would go to their houses in order to eat or drink water, while some would just hang around in every corner of Haran. The latter are usually seen in the library reading books, laughing together under the mango trees, or playing basketball in an improvised court near the school. 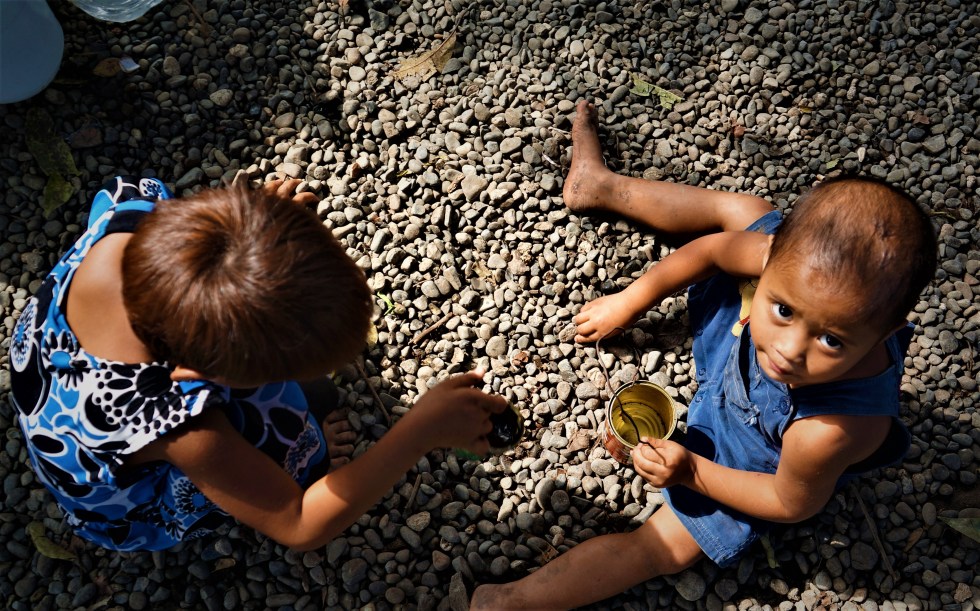 Toddlers inside the evacuation center chatting together as they play in the ground under the mango tree. (Kath M. Cortez/davaotoday.com)

Toddlers who are not yet studying can be seen playing in the ground. They use some old donated toys to enjoy themselves around the vicinity. Others use empty cans, leaves and even small stones to keep themselves busy.

“It saddens us to see our children growing up in a place like this. Now they play in a limited space and see animals only through books. During our younger days in the mountains, we would climb trees, run as fast as we can, and hunt for animals in the forest. That’s how we play and learn life,” uttered by Datud Tungig Mansimuy-at, one of the community leaders of the Lumad.

Despite the condition inside the evacuation center, the leaders of Salugpungan and all the evacuees have decided not to return home. Their condition stays the same and they are hoping that government officials would soon listen to their plight and calls.

The evacuation center will remain to be their community as long as they remain unsafe in their ancestral lands. (davaotoday.com)