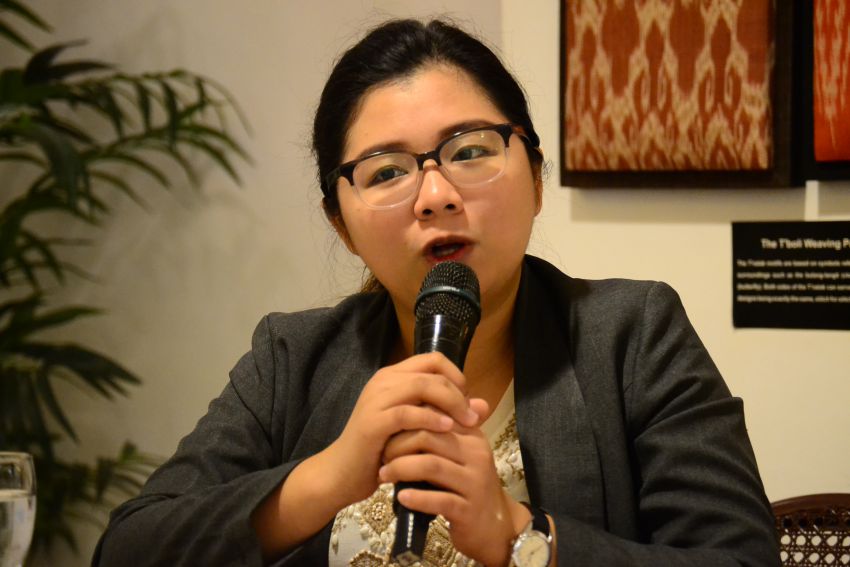 ONE FOR MARAWI. JCI Duwaling President, Liezel Salera told reporters in a press conference at the Habi at Kape in Abreeza Mall on Wednesday that they are hopeful to raise funds through the ‘OneLove, OneMindanao Campaign’ to provide food, clothing and medical assistance and other basic needs for the internally-displaced families in Marawi. (Robby Joy Salveron/davaotoday.com)

DAVAO CITY, Philippines – Local groups here have collaborated to raise funds and gather other forms of support for the victims of Marawi siege.

Junior Chamber International (JCI) Duwaling President Liezel Salera said in a press conference, Wednesday, June 7, at the Habi at Kape in Abreeza Mall, that along with the other organizations in Davao, they are set to organize various activities for their fundraising campaign for the internally-displaced families in Marawi.

The number of affected civilians continued to increase as the clashes between military forces and the Maute Group go on in Marawi. Hence, food and other basic necessities have become a big problem for the residents in the area.

Data from ARMM HEART (Autonomous Region in Muslim Mindanao-Humanitarian Emergency Action and Response Team), revealed that as of 5:00 p.m. on June 6, a total of 47, 957 families or 239,887 individuals have already left Marawi since the start of the siege.

Salera said that one of their biggest activities is the Concert for Marawi which will be held on Independence Day, June 12, 6 p.m. at the Rizal Park, here.

Dubbed as “OneLove OneMIndanao”, Salera said that the concert is aimed to “reach and help more Mindanaoans, both civilians and soldiers” that have been victims of war.

“The concert will be free. The fundraising part (of the concert) will be on the selling of merchandise like shirts, ref magnets and anything that we can produce for that day. We will also announce our crowdfunding and we’ll see what else we can do,” Salera said in an interview with Davao Today.

Salera said several local artists have already volunteered to perform while other artists have not yet confirmed.

The concert is a joint collaboration of JCI-Duwaling, H.O.P.E, Prim Communications and Events Co., in partnership with 10th CMO Battalion of the Philippine Army.

Salera also told the media of the start of “Oplan Kaagapay”, a donation drive wherein people can donate cash or any kind.

A crowdfunding page will also be set to reach communities outside Mindanao and outside the country for donations.

Their minimum target is P300,000 that is equivalent to 1,200 packs of either comfort packs, hygiene packs, packs for women or for babies.

Meanwhile, Department of Social Welfare and Development Secretary Judy Taguiwalo reminded the public through her Twitter post on May 29, a photo showing “Culturally Sensitive Marawi Donations” including Halal food (beef, fish, chicken) and clothing such as ‘hijab’ and ‘taqiyah’. Taguiwalo captioned her post with ‘a timely and important reminder’. (davaotoday.com)