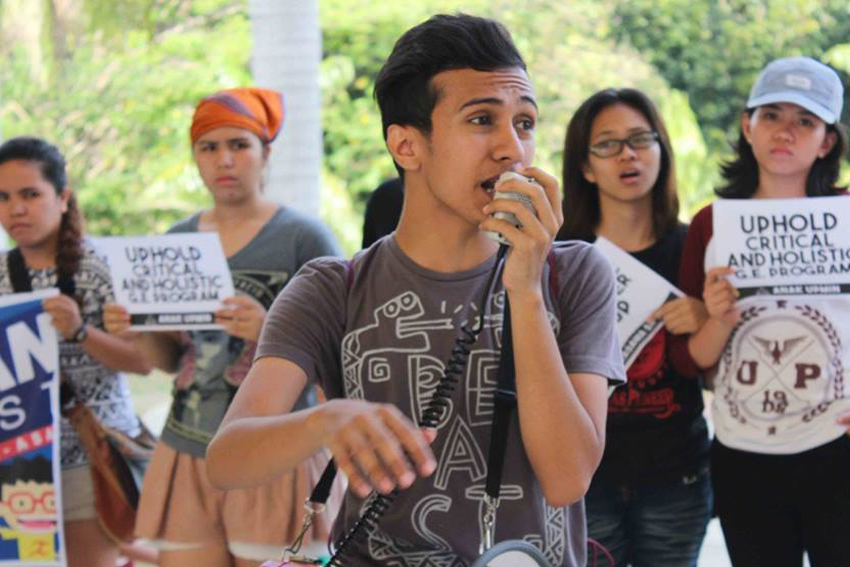 After graduation, Siahmard will be studying Medicine at the University of the Philippines Manila, College of Medicine, and is planning to become a doctor in M’lang, North Cotabato province.

He said it was always his dream to become a doctor for the people.

“We should live by the principle that we should serve the people,” he told Davao Today in an interview on Friday, June 24.

“Walang hospital sa malalayong barangay namin. Walang doctor na hands on talaga sa mga maliliit na baryo. Kaya gusto kong doon talaga maglingkod (There are far-flung villages in our place which do not have hospitals. Our small communities lack doctors. That’s why I really want to practice there),” he said.

For almost two and a half years, Siahmard has been active in educating and mobilizing students inside and outside the university. He is an outgoing University Student Council councilor for education, vice chairperson for Mindanao of Katipunan ng mga Sangguniang Mag-aaral sa UP, and the current spokesperson of the League of Filipino Students (LFS) Southern Mindanao Region.

As an activist, Siahmard said his eyes were opened to social realities.

During his second year, the course Mindanao Studies 1 (SSP7), under Prof. Kenette Jean Millondaga, opened to him the struggles of Lumad, Moro, and other marginalized sectors in Mindanao.

He also added how educational discussions from Alyansa ng mga Aktibong Kabataan ng UP Mindanao (ANAK UPMin), a progressive group in UP Min, molded him to become a student leader and activist.

Struggles of a student activist

Telling his family that he is an activist came as a shock, he said.

“Nabigla yung family ko. ‘Wag daw muna akong mag-engage sa mga ganitong rallies, events, organizations on the grounds of security. Naiintindihan ko naman sila, pero importante ‘yung pag-e-educate sa kanila, pagpapaintindi unti-unti (My family was shocked. They told me not to engage in those rallies, events and organizations on the grounds of security. I understand them, but it’s important that we educate and let them gradually understand the struggle),” Siahmard said.

Siahmard recalled that during his first year he had no time attending educational discussions when he was invited by organizations. He said he had no time yet as he was adjusting to the culture and academic works.

“I had to weigh my priorities and practice proper time management,” he said.

Siahmard said he usually studies between 9:00 pm and 10:00 pm after all the council meetings and school events were done. He tried hard not to compromise his grades with his involvement in activism.

Yes, he also failed exams, he said. But he understood that he had to do better the next time.

He reminded students not to be afraid of getting low or failing grades.

“You only need time management.”

“Mas nakakatakot yung kinabukasan ng mga kabataan kung hindi ako lalaban ngayon. Mas matakot ka sa kinabukasan ng mga susunod na Iskolar ng Bayan na papasok sa isang komersyalisadong edukasyon (The future of the youth will be at stake if I don’t fight now. You should be more scared for the future of those Iskolars ng Bayan, who will suffer under a commercialized education),” he said.

He also said that it’s important that youths must engage and integrate with the other sectors because “there are lots of things that we could only learn outside the university and through basic masses integrations.”

Siahmard said students should be active in calling for a quality and accessible education.

“It’s important to value the education, but let’s remember that we value it not just for ourselves, not just to earn Latin honors. We value it because education should be for the development of our country,” Siahmard said. (davaotoday.com)