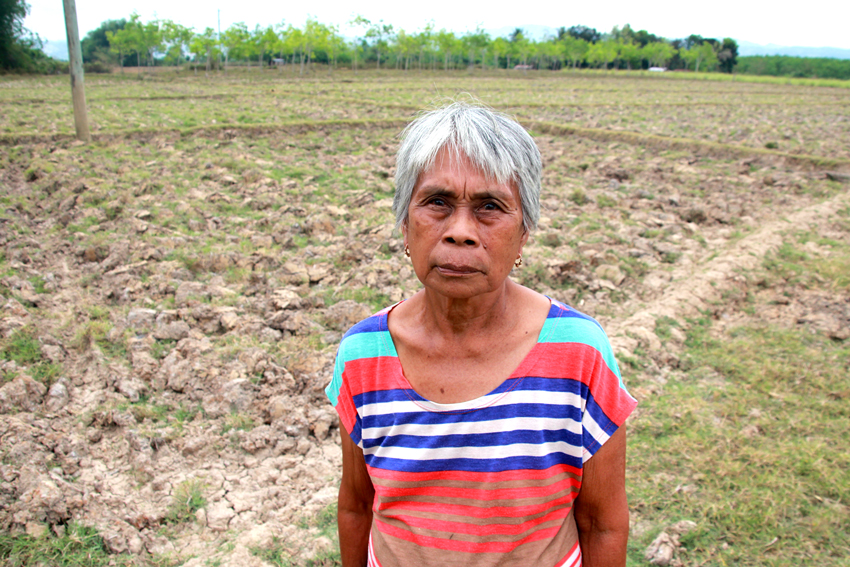 ARID LAND. The continuing dry spell has completely dried up this farmland in La Fortuna, M’lang, North Cotabato owned by Loisa Saragosa, 72, who complained that they were not able to plant again since the El Niño struck in the area in the middle of December last year. North Cotabato is already under the state of calamity as damage to agricultural crops is already placed at P670 million. (Mara S. Genotiva/davaotoday.com)

(We ask for mercy from God, we pray for rain.)

All five villages of La Fortuna in the town of M’lang, province of North Cotabato have been hit by the El Niño phenomenon since mid-December last year.

A few minutes motorcycle ride from the barangay hall of La Fortuna is Sitio Singko, where Loisa Saragosa resides.

Losia owns half-hectare of farmland she inherited from her father. Her family tills the farmland devoted to rice production.

The dry spell has ruined Losia’s farm, there are no available sources of water needed for land preparation and planting. It is now parched and brown.

‘It’s too dry to support vegetation,” lamented the 72-year-old Losia. She is also worried their farm animals to include carabaos and goats will not be able to survive due to the scarcity of fresh grasses to eat.

(Life is too difficult now in our place. We have no income from our farm. We can do nothing.)

Most of the rice farms in Losia’s area are rain-fed farms. She said a water impounding project was constructed in their place to water the rice fields. But water impounding still needs rain to accumulate water for release to farms. With the long drought that struck the area, all the resources at the water impounding have already dried up.

Losia sold some of their farm animals to survive. She has also asked her children for help. Her grandchild has also decided to look for other jobs in the farm to earn.

(Even without viand, we can survive as long as we have rice.) 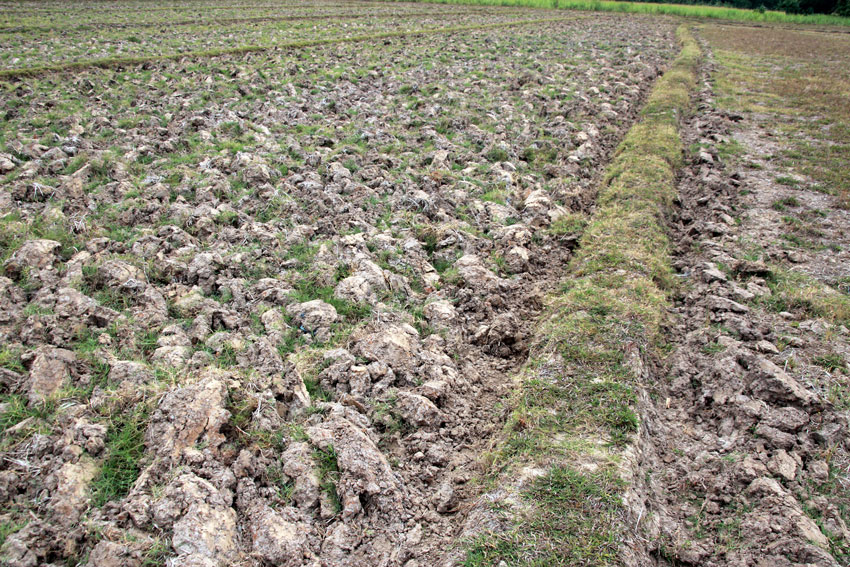 The Provincial Government, last week, has placed North Cotabato under a state of calamity due to the severe effect of the drought.

La Fortuna only has P95,566.15 calamity fund for the whole year 2019 of which, seventy percent of the whole amount or P56,898.31 is allocated for food subsistence. An amount of P10,000 from the P56,898.31 is also reserved for disaster preparedness activities of the barangay for the procurement of supplies and materials. Disbursement of the whole 70 percent allocation for disaster is divided into four quarters, which means in each quarter, La Fortuna can only disburse PHP14,224 for food subsistence.

Barangay Councilor Wilfredo Garcia said they would prioritize the procurement of rice for distribution to the affected residents of La Fortuna. But with nearly 1,000 hungry residents severely affected by drought, the local government can only afford a one-time distribution for a few kilos of rice for each family.

(We have a meager budget. It can only buy 30 sacks of rice, more or less. We can only provide about 3 kilos of rice per family good for two days. Then, we go back to the same problem.)

La Fortuna is not the only village in M’lang affected by the dry spell. The farmers in irrigated areas in M’lang are also suffering from a lack of supply of water for their rice fields.

One example is Barangay New Janiuay, which is more or less eight kilometers from La Fortuna. New Janiuay is an irrigated area but now the farmers complain of the lack of supply of water in irrigation.

Rogelio Quintero, a barangay councilor of New Janiuay said most of the residents in the area depend on rice farming, not only for income but also for their daily consumption.

“Most sitios in our barangay are affected because no water pumps were installed at all. Even sugarcanes there are withered,” Quintero said.

There is one situation where farmers in New Janiuay could not understand why they need to suffer from the dry spell.

The project, considered by DA as a prototype solar irrigation system in La Fortuna, was formally switched on by Secretary Emmanuel Piñol and was personally witnessed by President Rodrigo Duterte last February 2017.

The project has a budget of P8.7 million, according to Quintero. 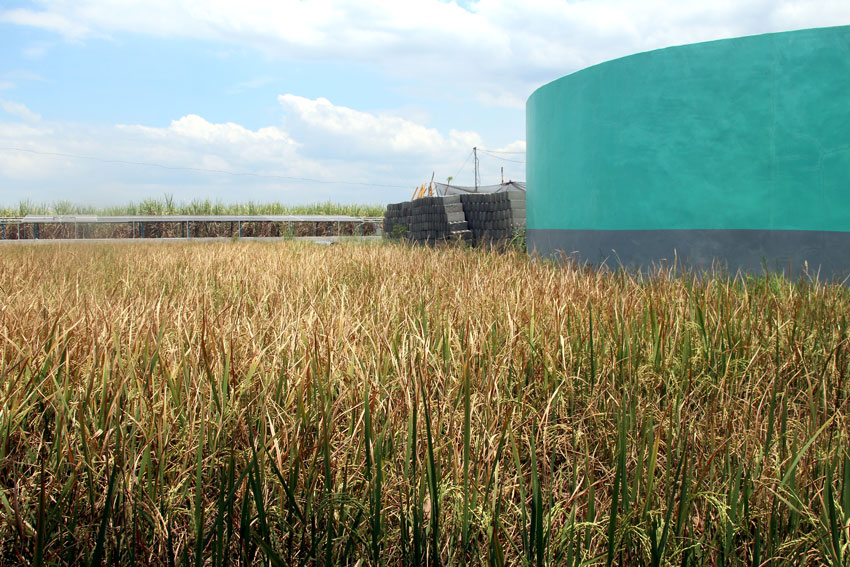 NOT SPARED. Plants wilt at a rice paddy field in Barangay New Janiuay, Mlang, North Cotabato due to dry spell. This farmland was not spared despite being located beside the P8.7 million Non-Inverter Solar Irrigation System by the Department of Agriculture. The facility failed to operate since it was launched in 2017 by President Duterte and Sec. Emmanuel Piñol. (Mara S. Genotiva/davaotoday.com)

The project has 50 solar panels and can pump out up to 800 gallons of water per minute, enough to submerge three to four hectares of rice fields in a day.

Now, the project has no use for the farmers and has been left idle.

Residents said that it was only during the turnover ceremony that they were able to see the said irrigation system fully functioning. After switching on last February 2017, it has never been utilized by the farmers to irrigate their farmlands.

Quintero explained that a small pond few meters from the rice fields, where the system of the DA project is connected, does not have enough water needed for the rice fields.

Near the solar irrigation project lies the 1,500 square meter of rice field of a farmer named Lano. He was supposed to have his second cropping this year. The last harvest of Lano took place in September last year. That was his last. When the drought started to ruin farmlands in Lano’s place, the DA project, which lies next to his farmland, failed to provide water. The project is a complete failure.

Fortunate enough, other farmers in the area were able to utilize a water pump donated by a local foundation. They managed, at least to water their farmlands. But Lano was not able to use the water pump due to the high cost of diesel fuel.

(We cannot afford to plant rice during the dry spell because of the cost of the fuel for the pump.)

To keep the moisture content of the farmlands amidst the blistering heat of the sun, they need to pump water to their rice fields at least every seven days. 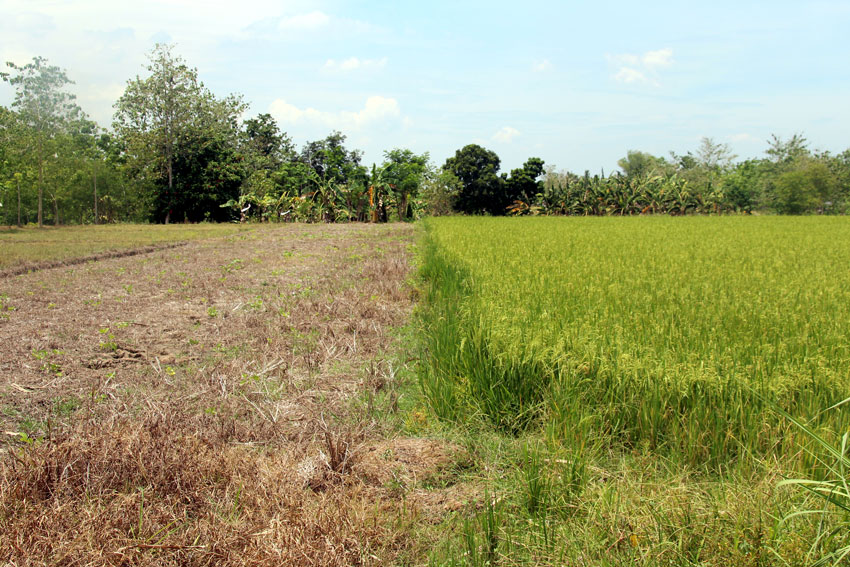 CONTRAST. The onslaught of drought has made a contrasting situation in farmlands in New Janiuay, M’lang, North Cotabato. On the left side shows an unproductive rice field severely affected by the continuing dry spell as owners could not afford the high cost of required fuel for the generator to generate enough water for land preparation and planting. On the right side of the photo shows productive farmland that survived the El Niño with the support of the very costly water pump. (Mara S. Genotiva/davaotoday.com)

Few residents also have rubber trees, but it also relies on sufficient water supply to produce plenty of rubber sap. Moreover, the selling price of rubber is becoming cheaper.

Residents also tried raising tilapia fingerlings as an alternative livelihood but the water level of the pond continues to go down due to the extreme weather condition.

Damage to agricultural crops is placed at around P670 million due to little to no rainfall in the past three months.

The El Niño has already affected around 13,000 farmers in the province according to the Office of the Provincial Agriculturist.

Cloud seeding operations are underway, but the farmers are not convinced with such a measure. They reasoned out that cloud seeding is not good to other crops like the fruit-bearing trees. Each operation is also costly, but chances of rain would fall in particular areas is slim, they added.

Both barangays stressed that while people cannot develop their farmlands, they need enough assistance, especially food supply from the government to survive the drought that is expected to persist for months. (davaotoday.com)