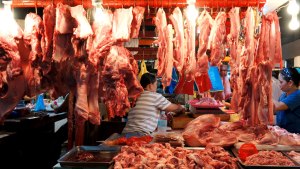 Pork vendors in Davao City’s Bankerohan Public Market noted a decline in their sales following the outbreak of African Swine Fever (ASF) in the region. The Department of Agriculture, though, has assured the public that it is safe to eat pork as ASF cannot be transmitted to humans but only affects pigs. (Mara S. Genotiva/davaotoday.com)

DAVAO CITY – Local hog raisers call on the national government to tighten measures to bar the entry of imported meat products that are contaminated with African swine flu (ASF).

This call comes amidst the signing of a presidential executive order lowering taxes on imported pork while the Davao City Council voted in favor of an ordinance banning the entry of pork from other regions and countries because of the rise of ASF.

The Hog Farmers Association of Davao Region, through its president Eduard So, believes this “laxity in biosecurity in borders” has allowed the spread of ASF from products that came from countries like China.

“Historically, we don’t have ASF here in the Philippines. But because we import meat products from these countries and even patronize smuggled products the problem will continue to grow,” he added.

So called out the government to look into the enforcement aspect as he said many of these products easily passed the inspection and other measures in many entry points. For instance, he mentioned that imported canned goods and frozen meat products are still in many supermarkets despite the Department of Agriculture’s memorandum banning all entries of imported meat.

“We let these products on display despite the ban, then who will be the authorized agency to impose penalty and confiscate these products? We have many agencies concerned but it seems like they are unsure of their role”, he added.

He explained that once these products are mixed with food used for swill feeding it can cause death to the animals.

Davao Region has implemented a border lockdown that prohibits the entry and selling of pork from other provinces and countries.

The Department of Agriculture Region 11 reported that the ASF has affected a total of 10,078 farmers in 209 barangays in 40 local government units (LGUs) in Davao Region.

Currently only a few local and commercial hog raisers “are gambling” to continue their hog production in Davao region to supply live meat to local vendors and markets in the National Capital Region.

Valenzuela points out the factors of low supply are the ASF and strict quarantine protocols with the pandemic that pushed costs high and downsized the market.

He added that the situation has also worsened when local vendors need to compete with the NCR market on the price of live meat products.

“What is difficult is that we are forced to provide the same price to meat producers which are currently a big challenge for local vendors. So as a result, vendors choose to downsize the amount of live meat they buy to suppliers and sell this in a slightly expensive amount to cover the capital and other expenses,” Valenzuela explained.