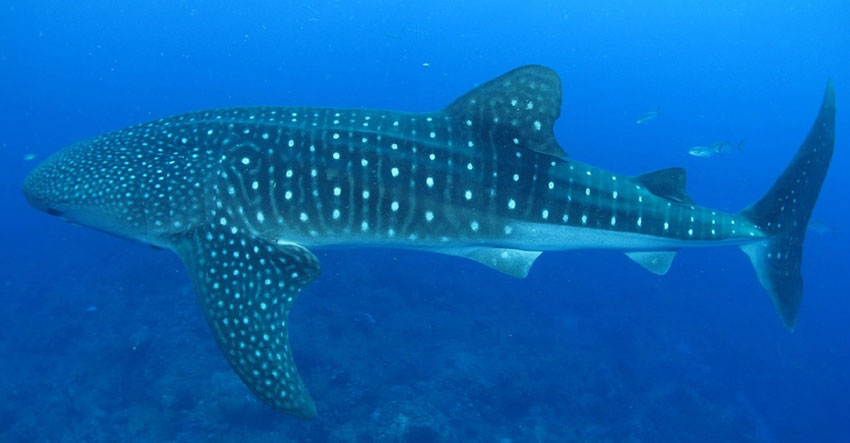 The Bureau of Fisheries and Aquatic Resources-10 appeals to the public not to harm or touch the whale sharks recently sighted in Camiguin province.(Photo courtesy of Pxhere.com)

MAMBAJAO, Camiguin — The Bureau of Fisheries and Aquatic Resources-10 (BFAR-10) has appealed to the public on Tuesday (Jan. 7) not to disturb or harm endangered species. This after the recent sighting of two whale sharks in the municipal waters of this island-province.

The gigantic fish, locally known as “butanding,” were spotted swimming near the White Island, a crescent-shaped sandbar, in Catarman town on Friday (Jan. 3).

Video footages of the sighting were uploaded on social media by scuba divers who happened to be at the site when the whale sharks swam by.

One individual took a video as one of the whale sharks got near the pump boat. A diver, who was already underwater when the creatures swam by, was also able to record their presence.

As shown on the video footages, the divers did not attempt to go near the whale sharks or made any unnecessary movements.

Teodoro Bacolod Jr., BFAR-10 assistant regional director, said it was possible that the whale sharks were looking for food, prompting them to head to shallow waters. They are said to feed on plankton and other small marine animals such as krill.

“Our appeal to the people is not to harm or touch them so they will not be disturbed. Just watching them is enough,” he said.

Bacolod said the BFAR has repeatedly instructed and warned fisherfolk, local fisheries wardens and other volunteers not to kill and butcher these whale sharks or they will be violating Republic Act 8550, the country’s Fisheries Code.

“Whale sharks are considered as endangered species and killing them is illegal,” he added.

The strict enforcement of fisheries law may have been the cause of the return of whale sharks in the waters of Camiguin, Gov. Jurdin Jesus Romualdo said in a separate interview.

He said that during the 1970s and 1980s, whale sharks were abundant in the island, but these eventually left the island-province when fishermen captured and butchered them.

The governor said that with the implementation of the fisheries code, they have not received reports of illegal fishing and other illicit activities in Camiguin.

“We have been strictly enforcing the anti-illegal fishing in Camiguin, and keeping a close watch on our waters for any illegal fishers,” he said.

Romualdo said the abundance of the whale sharks’ food around the island may have driven them back to Camiguin.

“We just let them (whale sharks) be, allowing them to be in their natural habitat. I discouraged feeding them as they will become dependent on humans for food,” he added.

He said it is the provincial government’s hope that the whale sharks, which considered Camiguin as home, return to the island and live freely.

“I remember before, these whale sharks used to swim beside ferries from Camiguin to Balingoan. It was such a sight. We hope they will be back here,” Romualdo said.

Whale sharks can grow up to 40 feet or 12 meters long and can weigh up to 18.7 metric tons, practically the size of a school bus.

A whale shark’s mouth is about 1.5 meters. They have rows of over 300 teeth, but as filter feeders they do not use these teeth to eat. Most of them tend to live in warmer areas such as the Indian and Pacific oceans. (davaotoday.com)