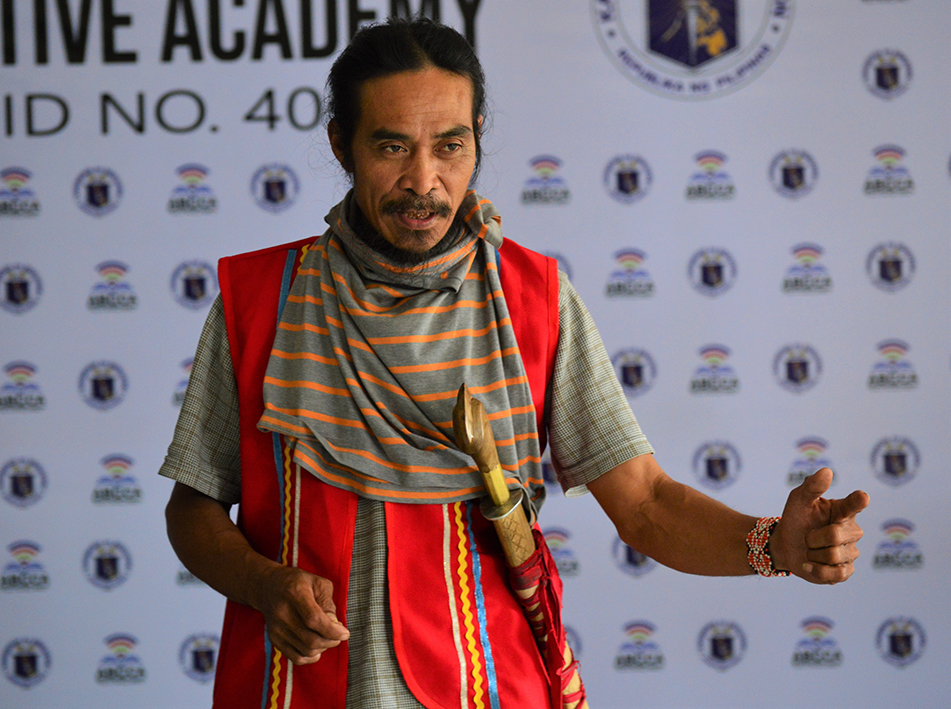 DETERMINED. Florencio Peratir, also known as Datu Maalamon, says they are ready to re-occupy the land they claimed as their ancestral domain in Butong, Quezon town, Bukidnon, even if they die in the process. About a thousand families belonging to the Manobo-Pulangihon tribe were driven out of their land by a corporation forcing them to live on the side of the road. (Jigger Jerusalem/davaotoday.com)

CAGAYAN DE ORO CITY – Tired of living like squatters and getting empty promises from government agencies, a group of indigenous people (IP) belonging to the Manobo-Pulangihon tribe are now ready to take back their ancestral land in Barangay Butong, Quezon town, Bukidnon even if it will cost them their lives.

“It’s now time for action. The time for documents is over. What we are going to do is fight for our rights,” said Florencio Peratir, who goes by the tribal name Datu Maalamon, during a press conference held here on Monday, September 20.

Peratir belongs to the community of about a thousand families who were driven out of the land they claimed as their ancestral domain in Butong by a corporation whose Forest Land Graze Management Agreement (FLGMA), granted by the Department of Environment and Natural Resources (DENR), expired in 2018.

The FLGMA allowed the company, Kiantig Development Corporation, to utilize portions of the more than a thousand hectares of lumad land in Butong.

Before the agreement had expired, the corporation drove away the families living there through alleged use of threat and violence, in 2017.

With nowhere else to go, the displaced community was forced to settle on the side of the road in Butong living in makeshift tents with no proper sanitation, potable water or food source.

In a meeting with the National Commission on Indigenous Peoples (NCIP) in July this year, the agency assured the tribe that their Certificate of Ancestral Domain Title (CADT) would be given to them before the end of the year.

Both the DENR and the NCIP acknowledged that the land in Butong is the tribe’s ancestral domain.

In a recent interview, Reymond Pimentel, officer-in-charge of the NCIP provincial office in Bukidnon, confirmed that the tribe has already complied with all the requirements needed for the issuance of the CADT.

Pimentel, however, noted that there was an “overlapping” of claims from some groups within the tribe and that this has to be resolved first before the NCIP central office can proceed with the processing of the CADT.

Rolando Anglao, the tribal chieftain, said they will enter the land whether Allen Capuyan, NCIP commissioner, will sign their CADT or not.

Anglao said they will push through with the re-occupation of their land within this month.

“We will enter and reclaim our land. We will die for our land. We don’t have weapons, but we have our rights,” the tribal leader said.

Peratir said it is Capuyan’s mandate to implement Republic Act 8371 or the Indigenous Peoples Rights Act (IPRA), but the commissioner has yet to act on their CADT.

“If we stay on the side of the road, we will die. We would prefer to die inside our land than die elsewhere. That is where our ancestors are buried,” Peratir said.

Ledesma said Pedregosa has already been made aware of the plight of the tribe and the bishop is interested to assist the lumad.