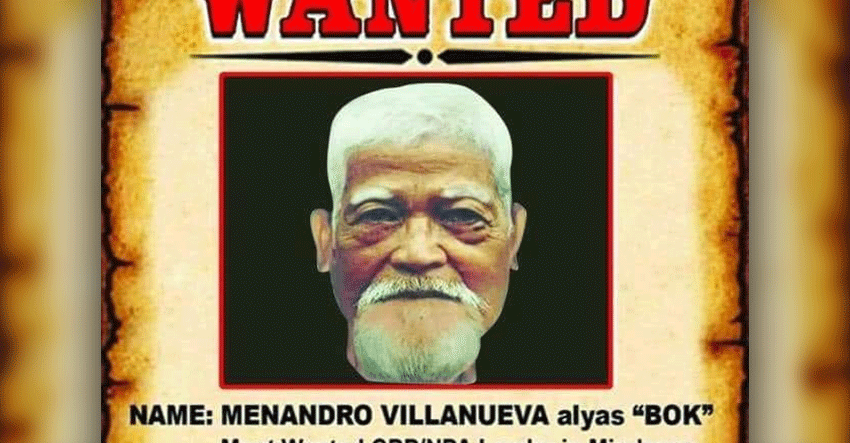 DAVAO CITY, Philippines — A leading member of the Communist Party of the Philippines (CPP) in Mindanao was killed in an encounter in Mabini, Davao de Oro last week.

CPP chief information officer Marco Valbuena confirmed that Menandro Villanueva, also known as Bok, was killed on January 5. His body now is with his family.

Villanueva, 70, was with the communist insurgency for 50 years.

Brigadier General Jesus Durante III, commander of the Army’s 1001st Brigade, said Villanueva was the national operations commander of the New People’s Army, long-time secretary of the National Democratic Front’s Southern Mindanao Regional Committee (SMRC) and served in its Mindanao commission, and the politburo of the CPP’s central committee.

The military’s Eastern Mindanao Command said Villanueva was a student activist of Kabataang Makabayan from Philippine Science High School, before going underground during Martial Law in the 1970s.

Eastmincom Commander Lieutenant General Greg Almerol on Wednesday said Villanueva’s death is another big blow to the communist insurgency that leaves a big void that will be hard to replaced.

Prior to Villanueva’s death, soldiers also killed another CPP member in Mindanao during an encounter on Christmas eve. Anna Sandra Reyes, alias Kaye, was identified as secretary of the NDF’s Regional White Area Committee (RWAC) under the Southern Mindanao Region.

Valbuena said the CPP salutes Villanueva, saying “Ka Bok together with other cadres and commanders, played an important role in the expansion and strengthening of the people’s army and the Communist Party of the Philippines across Mindanao.”

He described Villanueva as a “humble, silent ardent revolutionary who chose to be in the background yet his presence was felt in his deep, sharp political and military sense.”

The CPP said the loss of Villanueva will not deter their fight. “Because it is a just and democratic war which represents the people’s highest aspirations for national freedom and social liberation,” Valbuena added.

The AFP 10th Infantry said it will continue its pursuit of NPA leaders in Southern Mindanao. (davaotoday.com)