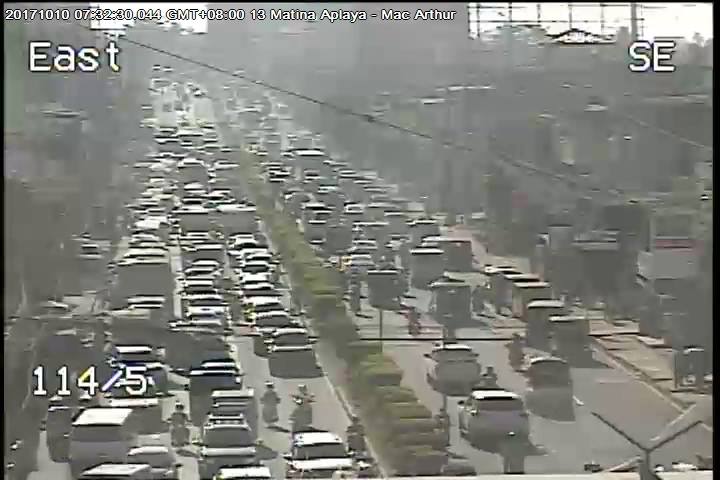 DAVAO CITY, Philippines – Heavy traffic in Davao City could stretch for up to five days more as the Department of Public Works and Highways (DPWH) have not yet completed its road clearing operations at the landslide-affected area of Maa-Carlos P. Garcia Highway.

Michael dela Vega, project officer of the DPWH said on Tuesday, October 10, that their operation will possibly last for at least five more days.

Dela Vega was present during Tuesday’s regular session of the City Council which discussed the ongoing road construction that has caused massive traffic in the city since a landslide struck a portion of what is commonly known as the Diversion Road on Friday dawn, October 6.

Since Monday, October 9, buses were deployed outside the city hall to ferry passengers who are affected by the traffic ordeal.

A portion of the road was also opened to north bound motorists from Bangkal to Panacan from 5am to 8pm starting Tuesday.

However, the Mines and Geosciences Bureau (MGB) Region 11 noted that the projects carried out by the DPWH could have added to the causes of the landslide on the portion of the road after it found out that there was a scraping of the “lateral support” of the hill.

“That landslide event, aside from the presence of tension cracks, can be attributed to the removal of lateral support. So it’s just a balance between man-made events like what the DPWH is currently undergoing which has triggered the instability,” said geologist Beverly Brebante, officer in charge at the MGB’s geosciences division.

But DPWH geologist Thea Sharmaine Peguit said aside from the excavation, the portion where the landslide occurred was “already an old landslide,” called an “escarpment.”

“It’s already weak and made up of unconsolidated materials,” Peguit said. She also mentioned a diversion of water way that has caused additional weight to the land.

“Our project may be one of the (contributory causes), but the main cause is the development at the upper side,” Peguit said, referring to the ongoing constructions on top of the Shrine Hills.

Commuters and motorists found themselves trapped in heavy traffic for nearly a week now, and the business sector said it has affected the local economy.

“The traffic congestion has caused delays and naturally perishable goods are adversely affected,” said Ronald Go, president of the Davao City Chamber of Commerce and Industries.

Go added that the incident showed there should be more alternate roads constructed including the coastal road and the Davao Bypass Road. (davaotoday.com)