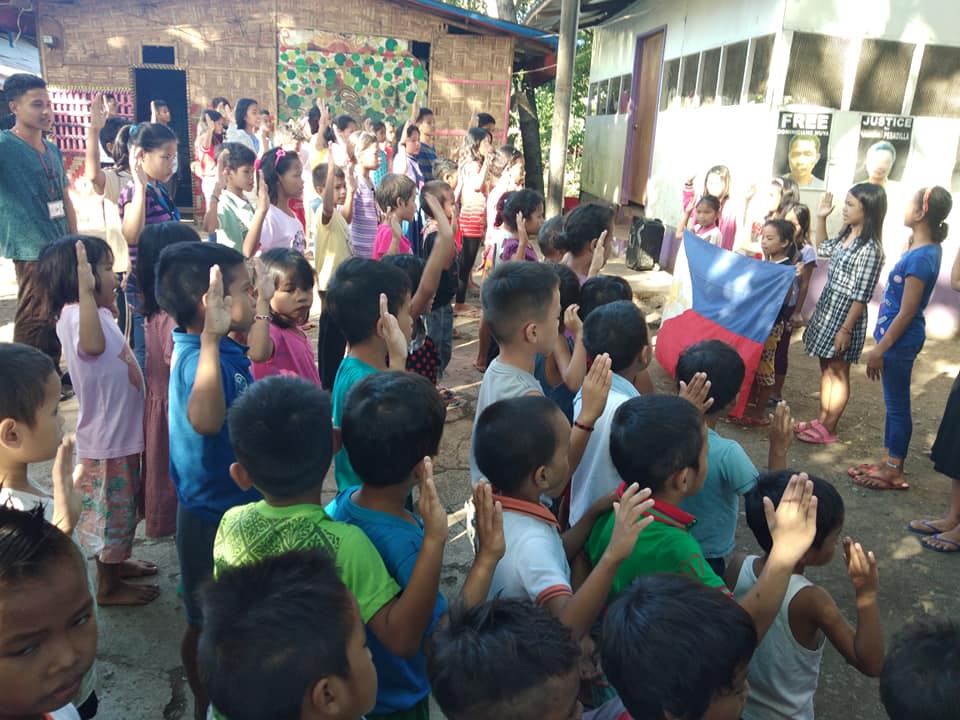 DAVAO CITY, Philippines — A group advocating education for indigenous peoples is urging the Department of Education (DepEd) in the region to order the government forces to leave the lumad communities so that the children can continue schooling in the lumad schools at Talaingod, Davao del Norte.

The Save Our Schools (SOS) Network issued a statement when a Deped Davao Region official was “making an issue” out of technicalities of Salugpungan Ta Tanu Igkanogon Community Learning Center Inc. (STTICLCI) when it resumed classes in evacuation center in UCCP, Haran Davao City.

DepEd Davao Region spokesperson Jenelito Atillo, in a report on Philstar.com last Jan.9, said that a permit of a tribal school could only be used “in the location to which it was given”. The agency recommended sending the children to the nearby public schools for their education to be counted.

“If we have to be technical about it, what about the violations made by the military against international humanitarian law and the rights of the children?” Rius Valle, SOS Network spokesperson, said.

“This is the reason why these Lumad children are in bakwit schools because the soldiers and paramilitary are encamped in the campus and padlocking them, and DepEd need to act on this,” he added.

SOS Network criticized DepEd for raising “technicality” as an issue among Lumad schools. Valle noted the incident of forcible closure of one MISFI Academy school in Kapalong, Davao del Norte back in 2015.

Yet, Valle said, the DepEd ignored the dangers by urging the Lumad evacuees to return to their communities and continue their schooling in areas stipulated in the government issued permits.

He said DepEd should weigh in the cases of attacks on Salugpongan schools and other Lumad schools.

The group recalled the case of Salugpungan student Obillo Bay-ao, 17, shot dead by a militiaman in Barangay Palma Gil, Sitio Nasilaban in September 2017; and Salugpongan teacher Rafael Miguel survived a gun attack by a member of Alamara in 2017.

Regarding to the DepEd official’s suggestion of transferring the Salugpungan students to public schools, Valle said that it is a “quick-fix solution but fails to address the problem.”

Aside from being far from the communities, he also doubted that public schools can fully absorb more than 600 students from Salugpungan schools.

“We remind the DepEd that Salugpongan schools and other Lumad schools ran by NGOs and religious groups are their partners in implementing their education program for the Lumad. There should be no competition,” Valle stressed.

Last Jan.7, Salugpungan campuses in Talaingod resumed their classes for the 3rd grading period in the evacuation center.

“Teaching Lumad children is such a monumental task. Education is vital to the social and cultural development of indigenous communities, so when Lumad schools are attacked it is no exaggeration to say that the future of IP communities is at stake. Because of that, we from STTICLC shall fervently resume the classes of two campuses at Palma Gil Talaingod albeit in a different area – at the Bakwit site at Haran, Davao city,” said Meggie Nolasco, STTICLCI Executive Director.

Nolasco called on the goverment forces to stop their attacks and spare their school as zones of peace as declared by the DepEd.

“We also demand to the Department of Education to strictly adhere to international covenants sparing schools and other places of learning from any form of attack,” Nolasco said.

The SOS network urged the DepEd in the region to investigate these cases of attacks on schools “which have been reported to them by Salugpongan administrators and other Lumad schools.”

Valle stressed that it is within the mandate of DepEd to enforce the protection of schools and ensure the right to education of Lumad children.

“Rather than zeroing in on the issue of technicality, the way to address these bakwet schools is to enforce the soldiers leave the Lumad schools and communities, and disband the paramilitary, so that the Lumad schools can return,” said Valle.

Salugpungan schools were facing a series of threats and harassments from the military and Alamara, over allegations that these lumad schools were being run by the New People’s Army (NPA). These accusations were already refuted by the school, arguing that they have permit to operate issued by DepEd. (davaotoday.com)