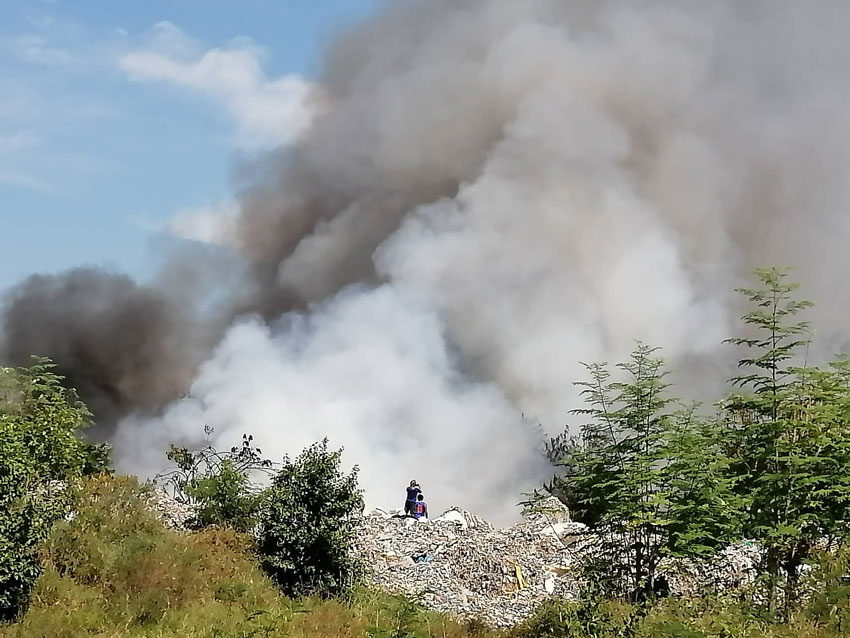 Residents take a look of the fire that occurred inside the premises of Verde Soko Philippines Industrial Corporation in Sitio Buguac, Barangay Santa Cruz, Tagoloan, on Monday. The more than 5,000 metric tons sitting at Verde Soko’s facility are waiting to be brought back to South Korea following controversy. (Photo courtesy of the office of Rep. Juliette Uy)

CAGAYAN DE ORO CITY, Philippines — Investigators have considered the possibility that the fire that consumed a portion of the remaining 5,177 metric tons of mostly plastic trash from South Korea that are stored within the premises of a plastic-recycling facility inside the Phividec Industrial Estate in Tagoloan, Misamis Oriental on Monday could be due to spontaneous combustion.

Tagoloan fire station chief Inspector Randy Obsioma said it’s possible that the fire was due to the presence of methane gas found in the garbage that was stocked at the Verde Soko Philippines Industrial Corporation yard at Sitio Buguac, Barangay Santa Cruz.

The heat, Obsioma said, could have triggered the fire that started as early as 9:00 in the morning, although it was called in only at 1:43 in the afternoon, about four hours after.

“Residents living nearby have already seen smoke coming from Verde Soko on Monday morning, but they did not mind it. They were only alarmed when the smoke got bigger,” Obsioma said.

He said eyewitness said that aside from a security guard, a farmer was inside the Verde Soko compound to bring his cow to graze.

Obsioma said they had to bring in earth-moving equipment like a backhoe and a payloader to help neutralize the fire, which ate up about a quarter of the area where the garbage is stored.

As of Tuesday afternoon, Obsioma said Tagoloan fire investigators are conducting a thorough investigation by gathering more information on the incident.

The fire official also blamed the Verde Soko management for what he thought as negligence on the company’s part.

He said there were alleged lapses as Verde Soko did not handle the trash properly.

In her statement Monday, Misamis Oriental 2nd District Rep. Juliette Uy has appealed to concerned government agencies to “investigate and arrest all those responsible for this air pollution crime.”

“Whoever committed this crime is sabotaging our lawful efforts to enforce our country’s anti-pollution laws. Now, they have made matters worse by polluting the air in Misamis Oriental with the toxic fumes from the burning of the garbage,” Uy said.

The incident, she said, might even be considered “destructive arson” because the burning was committed within the government’s industrial estate and the result was destruction of stored cargo for shipment.”

BOC-10’s Mindanao Container Terminal sub-port collector John Simon, in a text message last Tuesday, said that in light of the incident, it is imperative that the imported trash be shipped back to its country of origin with dispatch.

“It is high time [to] put pressure on the Korean government to fast-track the process of repatriation of the Korean garbage now,” Simon said.

It can be recalled that Verde Soko was embroiled in controversy after the Bureau of Customs-10 (BOC-10) red-flagged the plastic wastes it imported from South Korea for allegedly not properly declaring it.

The Department of Environment and Natural Resources in Northern Mindanao said Verde Soko did not have an import permit that would have allowed the company to transport the garbage. (davaotoday.com)