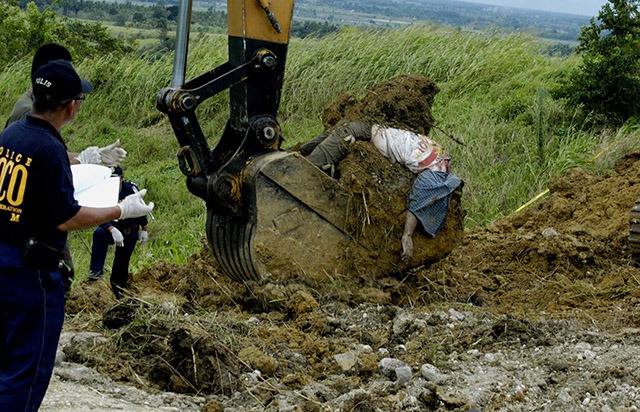 1. The Ampatuan massacre claimed many victims. Fifty-eight (58) unarmed victims were kidnapped and then killed on 23 November 2009 in Ampatuan town in Maguindanao province. Thirty-two (32) were members of the media who had accompanied the Mangudadatu family to file the certificate of candidacy for governor of then-vice mayor of Buluan Esmael “Toto”Mangudadatu. Moreover, six (6) of the victims were not part of the Mangudadatu convoy at all. One body was never found.

2. The victims were brutally treated. After they were shot, they were dumped and buried, along with the vehicles in which they rode, in three holes dug using a backhoe. The backhoe, which was owned by the Maguindanao provincial government, became an icon of the horrifying attack and its premeditated nature.

3. In 2019, ten years after, only 57 victims were recognized because of the absence of the body of Reynaldo Momay, who was among the 32 media persons killed. The families of the victims still struggle with the horrifying event in 2009 and its effects. In the words of Ma. Reynafe Castillo, the daughter of unrecognized victim Momay, “To forget is not an option, what I’m doing now is to fight forward.”

4. The massacre has been dubbed as the “deadliest single attack on journalists” in history by the Committee to Protect Journalists.It dramatized the “culture of impunity” where those who do wrong do so believing that they will go unpunished because of their power and connections.

5. Despite the high profile nature of the case, justice took a decade to run its course. A special court was created and a trial held for 10 years in Camp Bagong Diwa in Taguig City. On 19 December 2019, the Regional Trial Court Branch 221 found the three brothers Andal Ampatuan Jr (former mayor of Datu Unsay municipality), Anwar Ampatuan Sr (former mayor of Shariff Aguak town), and Zaldy Ampatuan (former governor of ARMM), and 41 others, guilty of 57 counts of murder.

6. It has been referred to as the “worst election-related violence in the Philippines.” It spotlighted how deadly elections can be in the Philippines where the private armed groups of political clans wreak havoc on each other and on civilians in their battle for power and legitimacy.

7. 15 of the 58 victims were women, including Bai Genalin Mangudadatu, the wife, and two sisters of now Congressman Toto Mangudadatu. Witnesses spoke of the violent treatment of the women: one woman was allegedly shot in the mouth, another between her legs. As we observe the 18-Day Campaign to End Violence Against Women beginning 25 November 2021, let us remember the women victims of the Ampatuan massacre and work towards a society where women and girls are safe in public spaces, workplaces, schools, and also online. This protection should be extended to members of the LGBTQIA community and boys.

8. The 2009 massacre was also a symbol of how women can become unwitting pawns in violent political conflicts who mainly involve men actors. Many women who, in their own rights, are capable of seeking public office unfortunately become mere placeholders or seat warmers until the male members of their families become eligible to run.

9. It was not just a simple case of rido or conflict between two clans: the Ampatuans versus the Mangudadatus. A deeper analysis showed how national political actors and developments enabled the rise of the Ampatuans. National government turned a blind eye as the clan accumulated firearms; operated a private army of reportedly 5,000 militia, police, and military personnel; and committed many acts of human rights violations against civilians—in exchange for clan support during elections. The Ampatuans controlled Maguindanao for two decades and 18 mayors of municipalities within the province were reported to be members of the clan.

10. It’s been said that the massacre allowed a test-run of the use of the President’s powers under the 1987 Constitution to declare a state of emergency and martial law. Then-President Gloria Arroyo put the province of Maguindanao under a state of emergency on 24 November 2009 and then under martial law on 4 December 2009, which was lifted nine days later, on 13 December 2009.

Years later, President Duterte put the entire Philippines under a state of emergency with the issuance of Proclamation 55 in September 2916 as a response to a bombing in Davao City. He also issued Proclamation No. 216 which put the whole of Mindanao under martial law beginning 23 May 2017 until 31 December 2019. What is the status of Proclamation 55? If it is still in effect, why?

11. We will be celebrating the 23rd Mindanao Week of Peace from 25 November to 1 December 2021 with the theme “Compassion and justice, resilience and healing for All.” Let us continue to work effectively together so that compassion, justice, resilience, and healing are extended to the families of the victims of the Ampatuan massacre.

12. The quest for justice for all 58 victims continues with the #Fightfor58 campaign of the media community, the Justice Now Movement of the families of the media workers, and the intention to file a second wave of cases against those who were allegedly responsible for planning, carrying out, and covering up the crime.