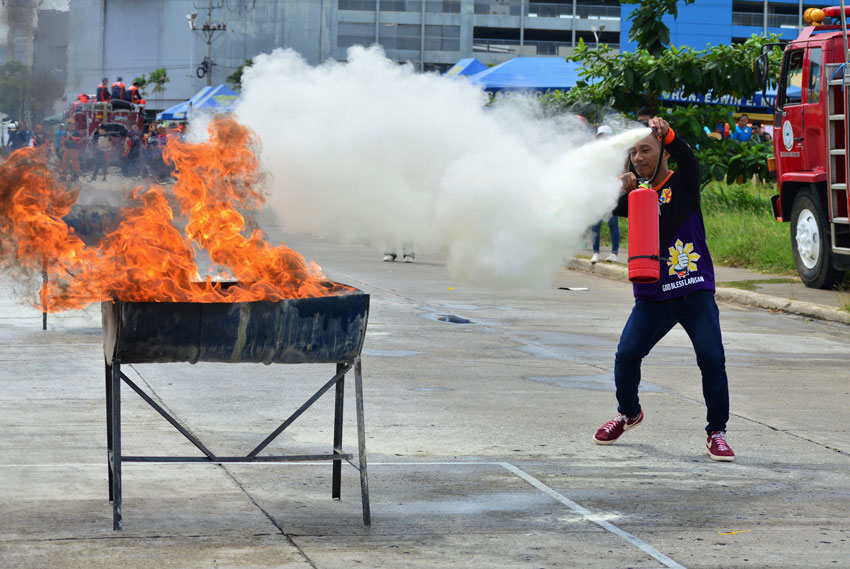 A barangay fire volunteer tries to put out the flame using a fire extinguisher during the 14th Fire Olympics held in Barangay Carmen on Wednesday, Aug. 7. (Jigger J. Jerusalem/davaotoday.com)

CAGAYAN DE ORO CITY, Philippines — In keeping with the proliferation of high-rise buildings due to rapid urbanization here, the Bureau of Fire Protection (BFP) will now need fire trucks that are capable of fighting conflagration on tall structures.

Superintendent Alan Cabot, the city fire marshal, said it’s about time that Cagayan de Oro upgrades its fire fighting equipment as the city has now become highly urbanized with towering condominiums, hotels, and commercial establishments dotting the city’s skyline. He added that the city must avail of a fire truck equipped with an aerial ladder that can respond to fires occurring on skyscrapers.

He said Pres. Rodrigo Duterte has said recently that he will allocate some P15 billion for the BFP modernization.

Part of the modernization program of the fire bureau is the procurement of six new fire trucks with upgraded capabilities.

“Hopefully, we can obtain one of those brand new fire trucks with aerial ladder, considering we are a highly urbanized city,” Cabot told reporters during the conduct of the 14th Fire Olympics held in uptown Cagayan de Oro on Wednesday, Aug. 7.

He said the upgraded fire truck has an aerial ladder that can reach up to the eighth story of a high-rise building. It will cost from P24 million to P27 million.

Thirteen barangays participated in various competitions in the Olympics aimed at enhancing their firefighting skills. Cabot said they are aiming at organizing Community Fire Auxiliary Group (CFAG) in all of the city’s 80 villages.

Currently, more than half of the city’s barangays have organized their respective CFAGs. “The CFAGs play a vital role in firefighting as we consider them our force multiplier,” Cabot added.

Chief Superintendent Lindy Lauzon, the BFP-10 regional director, also said the CFAG can prevent the fire from spreading before the fire trucks arrive. He said fires start at the incipient stage and it is important that it will be put out right away.

“With the presence of the CFAGs, we expect them to do the necessary initial action against the destruction of fire. That’s how important their role is,” Lauzon said.

The standard ratio set by the BFP is one fire truck per every 25,000 inhabitants, and the CAFG will act as the first responder in case of fire, Cabot said.

Cagayan de Oro has more than 676,000 people, according to the Philippine Statistics Authority’s 2015 data.

With the 15 fire trucks and 105 personnel, the city still has insufficient capacity to respond to fire distress call. That is why, the CFAG will be a great help to the BFP in its firefighting and fire prevention efforts, he said. (davaotoday.com)