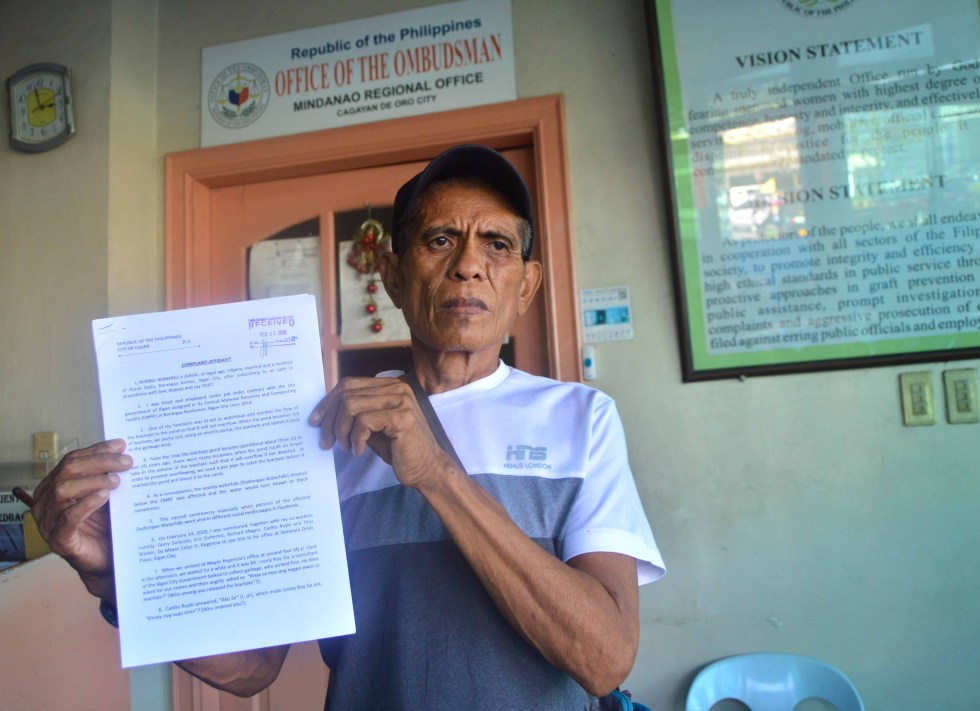 Norbel Romarez, the Iligan city government worker who alleged Mayor Celso Regencia physically assaulted and threatened him, shows to reporters a copy of the complaint he filed against Regencia before the Office of the Ombudsman in Barangay Kauswagan, Cagayan de Oro, Monday, Feb. 24. (Jigger J. Jerusalem/davaotoday.com)

CAGAYAN DE ORO CITY, Philippines – An employee of the Iligan City government has filed a complaint against Mayor Celso Regencia before the office of the Ombudsman based here Monday, Feb. 24.

Romarez said he was hired and employed under a job-order contract by the Iligan city government and assigned at the Central Material Recovery and Composting Facility (CMRF).

This is the area where the city’s wastes are dumped, at Barangay Bonbonon, since 2014.

In his complaint, Romarez said Regencia allegedly hit his abdomen and ears using the mayor’s two palms inside his office on Feb. 14, 2020.

The complainant added Regencia allegedly taped his mouth with a masking tape and ordered him to get inside a large carton box.

While in that position, Romarez repeatedly asked Romarez about his supposed “co-saboteur.” At one point, the mayor even allegedly threatened to kill the complainant.

Romarez said Regencia’s display of rage and anger toward him started when the reports that the Dodiongan Falls was contaminated with the leachate or liquid discharge coming from the CMRF’s dumped garbage started circulating on social media.

The complainant said he instructed a co-worker to release the leachate to avoid overflowing it.

“One of my functions was to act as watchman and monitor the flow of the leachate to the pond so that it will not overflow. When the pond becomes full of leachate, we pump out, using an electric pump, the leachate and siphon it back to the garbage area,” said Romarez, in his affidavit.

He also said there were times that “the pond could no longer take in the volume of the leachate such that it will overflow if not diverted. In order to prevent overflowing, we used a [PVC, polyvinyl chloride] pipes to catch the leachate before it reaches the pond and divert it to the canal.”

“As a consequence, the nearby waterfalls (Dodiongan Watefalls) situated below the CMRF were affected and the water would turn brown and black sometimes,” he added.

In news reports, Regencia was quoted as saying he just “pinched” Romarez’s ears and told him the Environment Management Bureau-10 (EMB-10) has warned the mayor of penalizing the city government of P200,000 per day for the release of the toxic liquid wastes from the CMRF.

In an interview following the filing of the complaint, Romarez said he just wanted to justice for what was done to him by Regencia.

He said that he has not been reporting for duty since Feb. 14 as he fears for his life. (davaotoday.com)