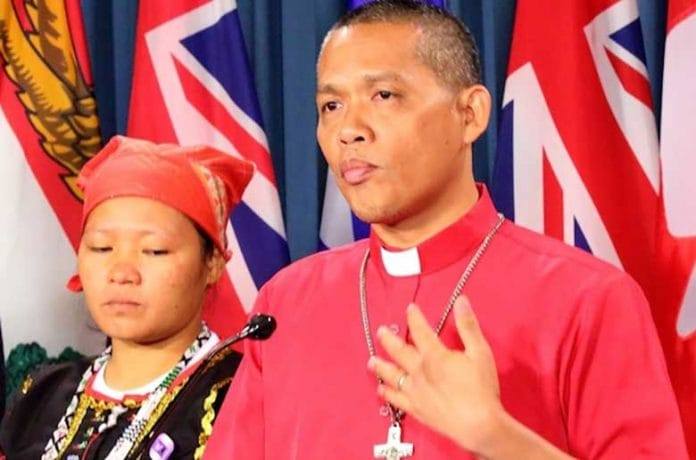 DAVAO CITY,Philippines — Around 700 community leaders and activists are now slapped with trumped-up charges, an “indicative of a sweeping crackdown on political dissenters,” according to human rights group Barug Katungod Mindanao.

Mindanaoan contingent composed of Lumad, Moro, peasant, workers, youth and advocates rallied to the Department of Justice (DOJ) on Thursday, December 6, demanding to drop off the trumped-up charges against rights activists.

Bishop Antonio Ablon, convenor of Barug Katungod Mindanao said that the DOJ are either “guilty of injustice, ineptness, cowardice, or an active collusion with armed state agents in deciding to proceed with the filing of these cases”

“It is really ironical when you have this factory of criminal cases spawned from this agency acting upon the behest of Duterte’s Inter-Agency Committee for Legal Action (IACLA),” Ablon said.

Ablon added: “What is clear is that these cases have been filed against human rights workers, defenders of ancestral lands, and advocates of justice and peace, many of them are now languishing in jail.”

The group hit the government’s ‘slap on the wrist’ treatment towards officials with allegations of corruptions who continued to enjoy their freedom.

“The injustice is made more stark when these trumped up cases are contrasted with the government’s ‘slap on the wrist’ treatment of the cases against Imelda Marcos, Gloria Macapagal Arroyo, and Juan Ponce Enrile,” Ablon decried.”They have not seen a single day in a (real) jail.”

Barug Katungod Mindanao denounced what seems to be “political tokhang” by the Duterte administration to silence critics, following the DOJ’s petition to proscribe the Communist Party of the Philippines(CPP) as a “terrorist” organization.

According to the group that 300 of 600 individuals listed as “terrorist” in the petition, came from Mindanao.

“The DOJ under the Duterte administration has become a stamping pad and clearing house for unlawful procedures and baseless cases to further proceed,” Ablon said.

“As this department acts as an apparatus for fabricating fake criminal charges, they also show what kind of ‘Justice’ is meant in the ‘Department of Justice’ — biased against the poor and brutal to those who stand for the people’s interests,” Ablon added. (davaotoday.com)