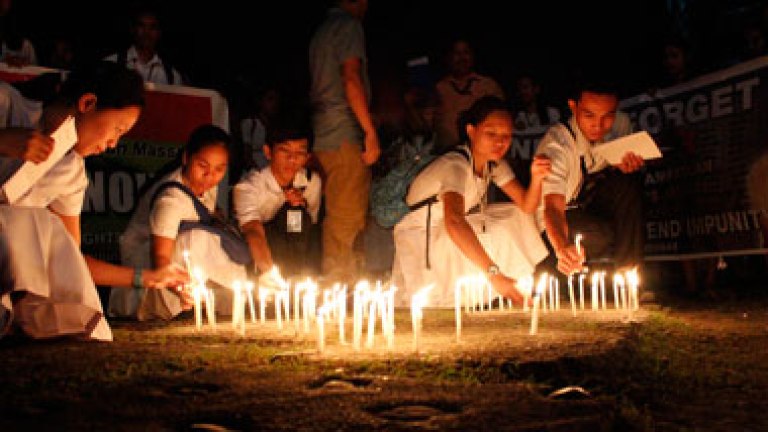 REMEMBERING THE VICTIMS. Students of the Assumption College of Davao light candles on Thursday outside the Redemptorist Church in Davao City. They remember the 58 individuals who were brutally killed in Ampatuan, Maguindanao Province in this photo taken in November 2012 . (davaotoday.com file photo by Medel V. Hernani)

DAVAO CITY — The victims of the Ampatuan massacre said they are “not comfortable” with the appointment of Atty. Salvador Panelo as the spokesperson of incoming president Rodrigo Duterte.

Panelo served as a former legal counsel of both Andal Ampatuan Sr., and Andal Ampatuan Jr. in the infamous case of the Ampatuan massacre which killed 58 people, including 32 media practitioners on November 23, 2009.

Mary Grace Morales, who spoke in behalf of the families of the media victims, said she is not comfortable and she does not see it right for Panelo to be Duterte’s spokesman.

“Hindi ako komportable. Hindi tama (I am not comfortable. This is not right),” she said.

Morales, whose husband Rosell, died in the massacre said Panelo’s appointment bodes ill for their case. Her husband was circulation manager of the community paper, News Focus.

“Kung sya (Panelo) na talaga, hindi na ako aasa na may mangyayari pa sa kaso na ito (If he is really appointed, I will no longer hope for progress in this case),” she added.

The National Union of Journalists of the Philippines also said Panelo’s appointment may have a “possible implications on the trial of those accused of what is acknowledged as the single deadliest attack on the press in history and one of the worst incidents of electoral violence in the country.”

“Although the NUJP recognizes the right of any accused to a defense, the group shares the sentiments of the relatives of the Ampatuan massacre victims,” said NUJP chairperson, Ryan Rosauro.

Rosauro called on the incoming administration “not to let political considerations get in the way of ensuring justice for the victims of the Ampatuan massacre.”

“We assure everyone that the NUJP will remain committed to defending freedom of the press and of expression and will closely monitor the incoming administration’s adherence to these rights. This includes remaining vigilant about the progress of the trial of those accused of the single deadliest assault on media in history,” Rosauro said.(davaotoday.com)