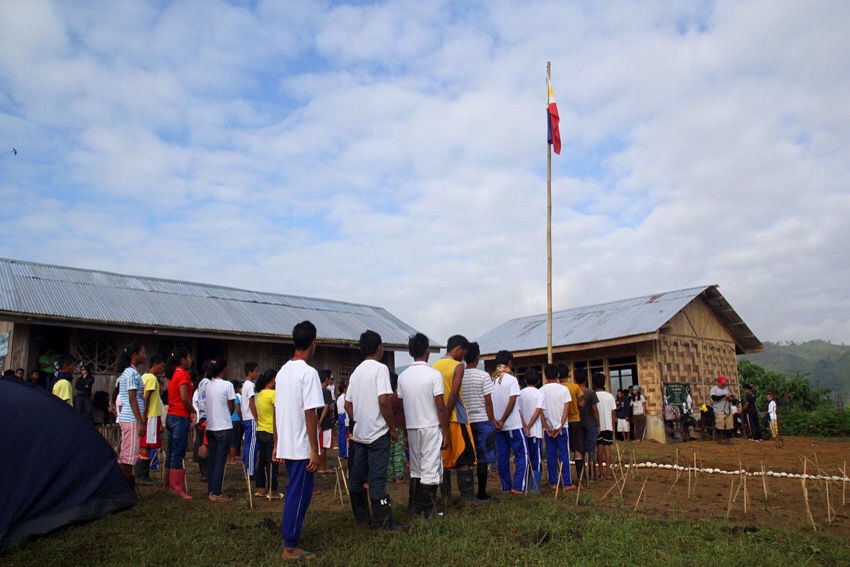 MISFI ACADEMY. Grade 7 and Grade 8 students of Misfi Academy in Barangay White Culaman, Kitaotao, Bukidnon evacuate their school Friday afternoon upon the order of the barangay captain to close their school on allegations that it was built by the New People’s Army. This picture was taken last September 18 during the Help Kitaotao Mercy Mission. (Ace R. Morandante/davaotoday.com)

DAVAO CITY — It was supposed to be a regular school day on Friday morning when teacher Evelyn Cabangal of the Misfi Academy in a village in Kitaotao town in Bukidnon was informed by the residents that they will be demolishing the school as ordered by the village chief.

Junance Magbanua, administrative staff of the Mindanao Interfaith Services Foundation Inc. (Misfi) said that at around 11:00 am, as students and teachers were preparing their lunch at the boarding school, a group of residents led by Barangay Chairman Felipe Cabugnason arrived at the school vicinity in Sitio Dao.

“They brought crowbars and bolos, and some of our students said they also saw some of the men bringing bows and arrows,” Magbanua told Davao Today.

Magbanua said 20 Grade 7 and Grade 8 students left the school in haste, along with their teachers, out of fear. They fled to the next town in Arakan, North Cotabato at around 1:00 pm and arrived there at 5:00 pm.

She said five students who are residents of White Culaman were forced by Cabugnason to stay behind.

From 42 students last month, Magbanua said some students were forced to stop schooling out of fear.

The teachers said they also saw military personnel from among the crowd who accompanied the barangay captain.

Magbanua said they recognized some military personnel “from their haircut and their bearing” as those who even “confiscated the phones of two teachers and the husband of one of the teachers.”

Magbanua said they were not able to document what was happening since their belongings were confiscated including memory cards and sim cards.

She said they demanded the men to return their belongings as these were personal belongings.

Magbanua said they appealed to Cabugnason to postpone the school’s closure and wait for the order from the Department of Education.

“But there’s no stopping them. They told us that they have already sent us a (barangay) memo ordering the closure of the school and they have waited too long,” she said.

In a text message Friday night, Cabugnason said their closure of the school was “successful”.

On October 1, Cabugnason sent the school a copy of Memorandum Order No. 04 Series of 2015 which orders Misfi, Inc. to close the school “within two days after you receive this memorandum.”

Cabugnason, who was reportedly supportive of the school during its establishment last year, has now accused the school as having links with the New People’s Army.

On October 6, the residents led by Cabugnason have already gathered in preparation of the closure of the school when they also met with the Department of Education officials from the Bukidnon Division who told them that they do not have the authority to order the school closure.

Magbanua said the students were only able to take with them their clothes and other personal belongings. She said they left a lot of school materials, including books in their school property.

Magbanua said when they left, the gate of the school made out of cyclone wire was already destroyed.

Meanwhile, Captain Norman Tagros, spokesperson of the Army’s 8th Infantry Battalion said “there was no demolition” of the school. He also denied that the Army was behind the school’s closure.

Tagros, in a phone interview with Davao Today, said it is the community who wanted to close the school.

“The decision came from the community, particularly the barangay council. We made the effort to have a peaceful dialogue, unfortunately Misfi was not able to attend it,” said Tagros, adding that the dialogue was held early this month.

He said it was during the dialogue that the community made it clear that they want to close the school as it “poses danger to the community.”

He said the community has the right to do so because “it is their community”.

“Daan lang sana tayo sa mapayapang pamamaraan. Yun nga kanina nagdecide na ang mga tao, karapatan naman po nila yun community nila yun (Let’s do this peacefully. What happened a while ago was that the residents have already decided and it is their right because it’s their community),” he said.

He also said there was no soldier involved during the incident. He said if there was violence that erupted, the soldiers “will really act on it”.

“Sitio Dao is roughly three kilometers from the center of Barangay White Culaman, hindi totoong may pananakot (there is no truth that they were threatened),” he said.

But Tagros clarified that they have yet to get full details of what happened in the village.

Vice Mayor Ruditio Rafisura said they will be holding a session of the municipal council on Monday to look into the matter.

He said they will invite Cabugnason and Misfi to attend the session.

“We will take action immediately after the hearing” he said.

Rafisura said he agrees with the DepEd in saying that the barangay has no right to order for the school closure.

“When Misfi was authorized to operate there was corresponding permits secured given by the local government of Kitaotao,” said Rafisura.

“The way I look at it, they will only be advised for suspension if there are violations stipulated in the contract of establishing the school in White Culaman,” he said.

He said he will also be inviting the local Department of Interior and Local Government Unit to explain whether Cabugnason’s release of memorandum is “really on the proper perspective of imposing the law.”

“If we see that there is abuse of authority done by the Punong Barangay then we will impose a corresponding reprimand, even action on that against him,” he said.

Rafisura cited the local government code of the Philippines, which mandates the Punong Barangay (village chief) to “organize and lead an emergency group whenever the same may be necessary for the maintenance of peace and order or on occasions of emergency or calamity within the barangay.”

“Pero sa tingin ko yung nangyari sa Misfi, I don’t think it’s an emergency where the Punong Barangay can use that power,” he said.

He said he sees the closure of the school “and even the memorandum, illegal”.

Schools as zones of peace

Father Peter Geremia, an Italian priest in Arakan, North Cotabato said the teachers and Misfi staff contacted him after lunch and told him that they will be going to his parish to seek sanctuary.

He said “schools are zones of peace that should be respected,” Geremia said.

Geremia also appealed to the local government unit of Bukidnon to address the issue.

“We are shocked that they fail to protect the people from the questionable disruptive advantage done an official to scare the school management,” he said.

“They have permits signed by you. You should be controlling the situation at the soonest possible time,” he added. (davaotoday.com)