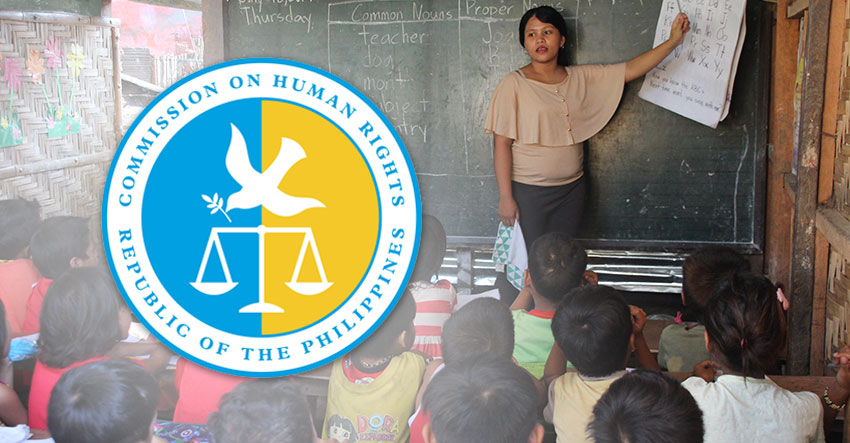 The Commission on Human Rights (CHR) in a statement on Thursday, July 18, 2019, raised concern over the Department of Education’s (DepEd) suspension order against against 55 Lumad schools run by Salugpongan Ta Tanu Igkanogon Community Learning Center Inc. (STTICLCI). The CHR said that the allegations thrown against Salugpongan schools “still require substantial pieces of evidence and due process.” (davaotoday.com)

DAVAO CITY, Philippines — The Commission on Human Rights (CHR) called on the Department of Education (DepEd) to reconsider its suspension order against the 55 Lumad schools run by Salugpongan Ta Tanu Igkanogon Community Learning Center Inc. (STTICLCI) and seek a dialogue with them.

The CHR has raised concern over the suspension order by the DepEd Region 11 that affects the education of Lumad children.

CHR spokesperson Atty. Jacqueline Ann de Guia in a statement on Thursday said they recognized the need to address security issues, but allegations thrown against Salugpongan schools “still require substantial pieces of evidence and due process.”

DepEd 11 has issued a suspension order last week, on the claims of National Security Advisor Hermogenes Esperon Jr. that the Salugpongan schools are allegedly teaching its pupil to advocate against the government.

“We reiterate our reminder against using blanket labels, which can endanger the safety of the communities and make them vulnerable to attacks and harassment,” de Guia said.

“In the face of conflict, children should be seen as zones of peace, consistent with the passage of Republic Act No. 11188, also known as the Special Protection of Children in Situations of Armed Conflict law, which protects children from all forms of abuse and violence. Their right to education should never be compromised in the face of such assertions from the government,” she added.

Also, the CHR said that DepEd needed to assess if there are enough schools near Lumad communities.

Suspension of the operation of Lumad schools “may fall short as a solution to a complex issue that require a more comprehensive assessment other than from a security perspective,” de Guia said.

“Their struggle for the recognition of IP rights and recurring grievances must be addressed instead of shrinking avenues for their empowerment. Utmost consideration must always be given to the welfare of IPs who have already suffered numerous injustices in their pursuit of self-determination,” de Guia said.

Lumad group Pasaka along with volunteer teachers, parents, and students of Lumad schools held a press conference on Thursday morning, to refute the allegations of Esperon and DepEd against the Salugpongan schools.

Administrator of STTICLCI even showed the permits to operate issued by the DepEd XI for the previous school year signed by then regional director Atty. Alberto Escobarte.

“If you have a permit to operate, it only means you follow to all the guidelines set by the DepEd itself. You would not be given a permit if your curriculum deviates to the existing curriculum, which is currently the K to 12,” Meggie Nolasco, STTICLCI executive director said. (davaotoday.com)