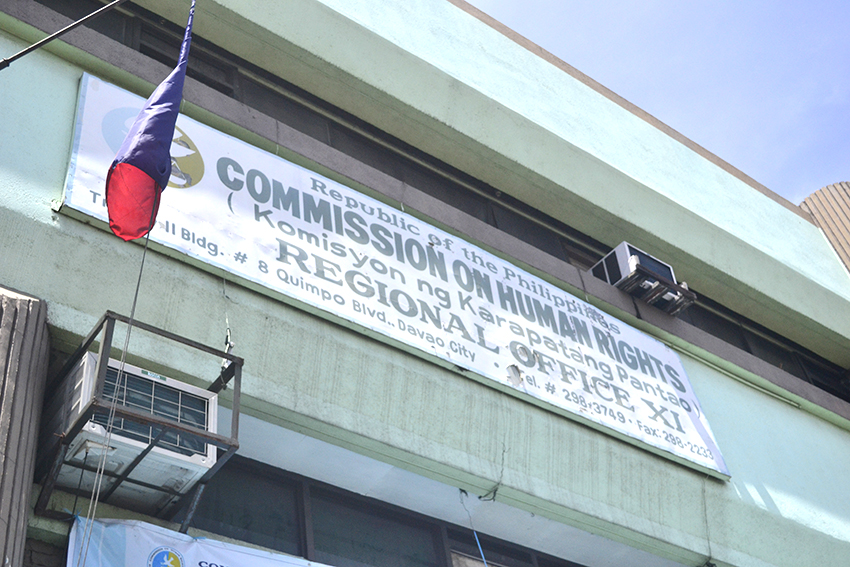 DAVAO CITY, Philippines — Now that Martial Law has been extended until the end of the year, the regional office of the Commission on Human Rights, an office that is mandated to monitor the human rights condition in the country, is facing a challenge.

An official of the CHR Region 11 said it lacks the personnel to investigate the cases of human rights violations recorded by the agency.

In an exclusive interview with Davao Today on Thursday, Emiliano Cajes, Jr. head of the Investigation Division said the lack of personnel in the agency remains a challenge for the Commission.

“Dapat sana 10 (investigators) every region. Yun ang nasa plantilla but sa ngayon meron tayong apat for the whole region,” Cajes said, who holds the position of Special Investigator IV and counted himself as the fifth investigator at CHR-11.

The other four, he added, are those who go to the field most of the time. He said being short of five men making it difficult for the Commission to do its job.

Investigators do jail visitations, interviews and examination of facilities “whether it is humane or inhumane”, Cajes said.

“Nahihirapan kami because we have an annual target. Kung ano yung target dapat tapusin namin yun,” he said. Cajes added they do not rely on complaints filed before their office.

“We also do the motu proprio investigation,” he said, adding that they also initiate an investigation based on news they read or hear.

Data obtained by Davao Today shows that as of July 27 this year, CHR 11 has recorded a total of 392 cases from July 2016. Of the total number of cases, 84 were already resolved.

From January to December last year, CHR-11 recorded 399 cases and only 114 were resolved.

The 114 resolved cases were either dismissed, closed, terminated, for filing, for monitoring or archived.

Of the 114 resolved cases, 84 were either dismissed or closed or terminated while 25 were for filing or monitoring and five were already archived.

Davao Today also learned that the CHR only has one lawyer. “The ideal number is five,” a source who refused to be named said.

Cajes explained that they have already sent requests to the National Office to hire more personnel for the regional office.

The CHR is a government body whose mandate is to investigate all forms of human rights violations involving civil and political rights. CHR monitors the government’s compliance to international treaty organizations on human rights.

It also recommends to Congress measures which can help promote human rights and provide compensation to victims of rights violations and their families.

Meanwhile, Cajes said they can only hope that “there will be no violation” committed on the implementation of Martial Law in the region.

He said, despite the reported increase of cases of human rights violation after the Martial Law declaration, the court has yet to rule on the cases.

Cajes said they cannot rule on an incident as a human rights violation unless it is proven in court.

Karapatan Alliance for Human Rights said there are already 38 victims of political killings in the region. Twenty-seven of which involves farmers. Karapatan also recorded 72 cases of illegal arrests a year since President Rodrigo Duterte came to power.

Human rights activists said the extension of Martial Law will result in more cases of human rights violations.
The farmers’ group Kilusang Magbubukid ng Pilipinas recently filed complaints before the CHR here to report on the alleged illegal arrest of farmers who are members of KMP.

Cajes said the said cases are now being investigated. (davaotoday.com)