DAVAO CITY – Members of an indigenous people’s group here said they reclaimed their homes early this month, more than a year after they were forced to leave by members of a religious sect.

“They ignored us at first but eventually gave up after we told them that you must leave because the land is ours and we built those houses,” said Jonas Diarog, one of the group’s leaders in recounting how some 60 members of the Bagobo-Klata confronted members of Jesus Christ Cooperative in Sitio Diolo, Barangay Manuel Guianga last May 16.

Later that day, a certain Noen Boroy De Gracia, 22, filed charges of harassment against Diarog, although a police report from the Tugbok Police District Office named him “Jonas Alingay.”

De Gracia complained that Diarog’s group carried “undetermined caliber of long firearms” and “told them to vacate the place if they did want to be harmed.”

Diarog denied the charges, saying they were unarmed when they confronted De Gracia.

Ruel Ayog, Barangay Manuel Guianga chairman, said upon learning of the incident, he alerted the local police and Army officials.

“There were reports that there were armed men who mixed with the IPs but when I came there, I found none,” he said.

Ayog said he with police officers tried to disperse the IPs but they were too many.

“They said their stand is to stay, so I just told them not to cause trouble,” he said.

Diarog said they were only forced to take things into their own hands when the government did not act on their forcible dislocation last year.

In January last year, 21 families of 43 residents of Sitio Diolo, about a kilometer away from Sitio Kahusayan, were forced out of their homes allegedly by armed members of the cooperative.

He said they filed complaints with the local government, the Department of Environment and Natural Resources (DENR) and the National Commission on Indigenous Peoples (NCIP), but “a year and a half later, the government failed to act on our complaints.”

“We have lost our livelihood and our farms when we were dislocated last year. What else can we do but unite and take back our homes,” said Diarog.

Adelina Guillego, 59, said that out of the 20 houses in Sitio Diolo, only six are left and their root crops are all gone.

“It really hurts to see your house that way but we don’t care anymore, we want it back,” she said.

Guillego said “we want to get our farms back so that we can build again and plant.”

For his part, Brgy. Capt. Ayog said “as the father of the Barangay I can’t take sides even if I know who among the parties is oppressed. I am here to keep the peace so no one is hurt.”

However, Ayog said the cooperative’s men “are outsiders who have not even paid courtesy to the barangay and have not given notice that they will enter the area.”

“As far as our records, they have not registered here in the Barangay since they occupied the homes of the IPs last year,” he said.

Ayog said “the cooperative said they hold rights to the land sold by them by previous occupants but the IPs also carry a certificate form the NCIP,” he said.

Ayog, pointing to a map, said Sitio Diolo is part of the Mt. Apo National Park and is now under the ancestral domain claim of the Bagobo-Klata. 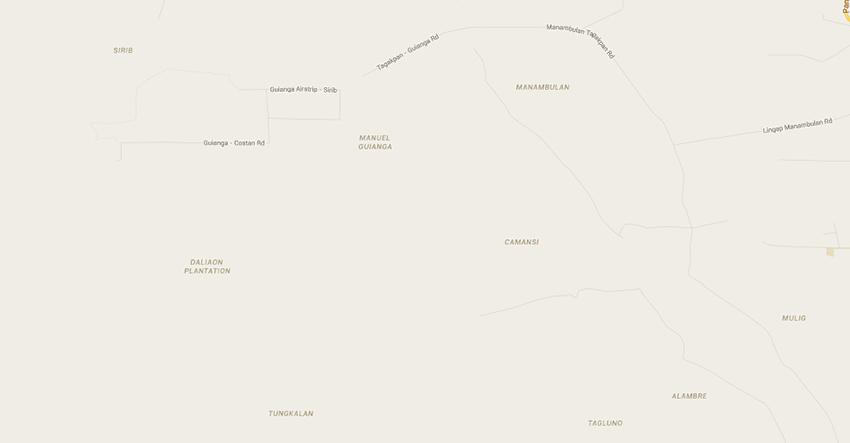 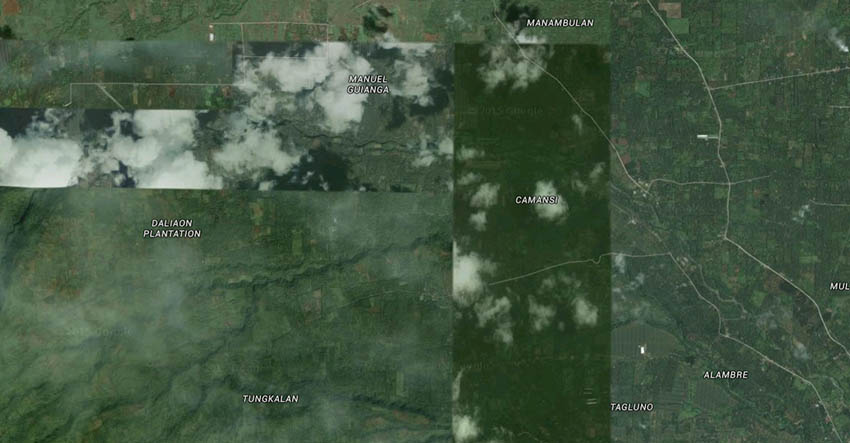 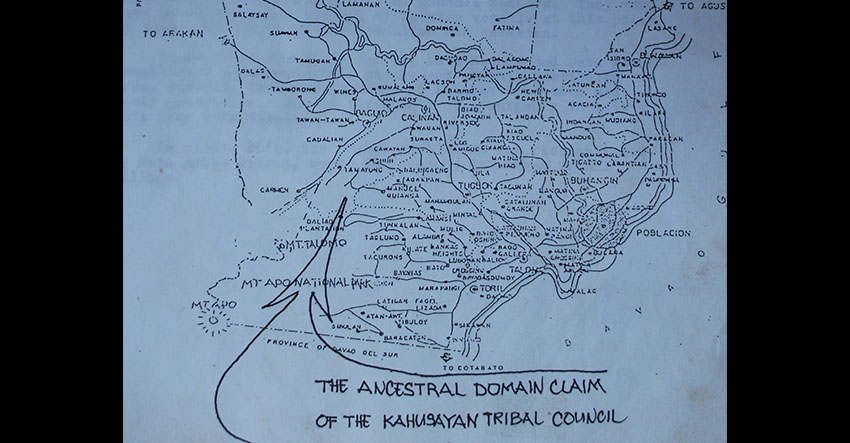 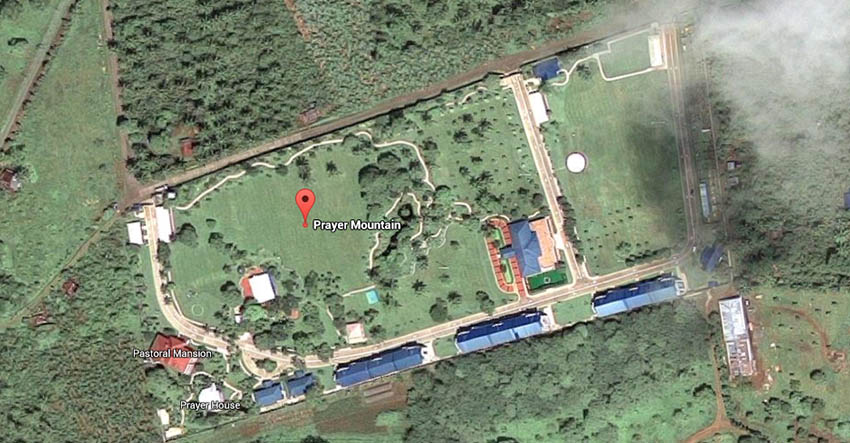 Google Satellite Image of the Kingdom of Jesus Christ, the Name Above Every Name Prayer Mountain in Barangay Tamayong, Calinan District 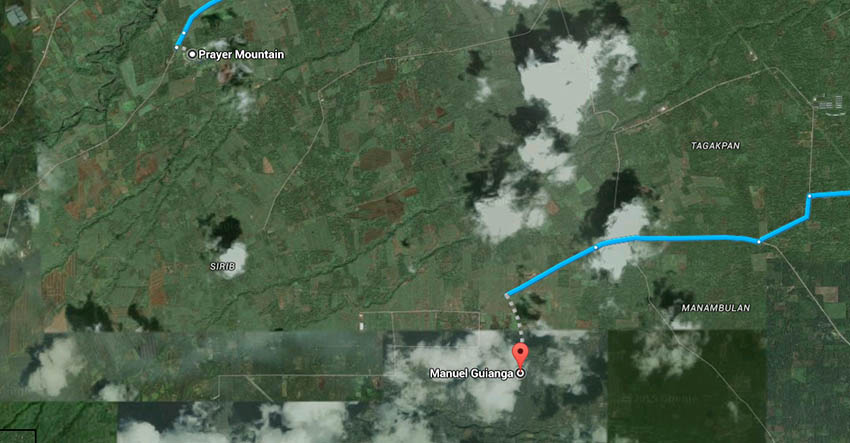 Google Satellite Image showing the proximity of the Kingdom of Jesus Christ, the Name Above Every Name Prayer Mountain in Barangay Tamayong, Calinan District to Sitio Manuel Guianga in Tugbok District

“The authority to ask in the area is the DENR but they have not really resolved the issue for several years now. This is reason why the problem kept recurring over the years,” he said.

The May 16 incident in Sitio Diolo was only the latest in the decades long struggle of the Bagobo-Klatas against what they call a “creeping takeover” of their ancestral land.

It was in 1960 when Bagobo-Klata leaders Datu Kaunda and Datu Awain established an “ethnocentric settlement” in the present Sitio Kahusayan, according to the Ancestral Domain Claim Petition, which the Bagobo-Klata submitted to the NCIP in 1999.

In the early 1980s, some “group of individuals” obtained documents claiming they bought the lands and then proceeded to occupy the lands.

In 1997, the Annex said, “A certain group coming from nowhere went to area.”

Later, a certain Ms. Monserrat Iturralde, a church member of Pasto Apollo Quiboloy, together with a surveyor, and some of their men went to the area and conducted relocations survey “without my permission,” according to then Barangay Manuel Guianga Captain Antipas Batingal.

Batingal said that Iturralde’s group were “instructing all occupants to vacate, threatening under pain of receiving warrant of arrest should they insist.”

He said then Bagobo-Klata chieftain Datu Ambes Diarog “secured certification to the effect that entire tract of land containing 484 hectares has been classified into alienable and disposable.”

Batingal said that in a dialogue in 1997 attended by 800 participants and officials of the local government, then Vice-Mayor Benjamin de Guzman ruled that Diarog’s groups can continue living in the area, while he also banned Iturralde from encroaching. During the dialogue, Tribal Deputy Mayor Datu Maximo Gabao, representing Mayor Rodrigo Duterte, issued a “stern warning” to Iturralde “not to repeat anymore their patent reprehensible and malicious acts.”

The said church is now known in many names: “Prayer Mountain”, “The Garden of Eden Restored”, “The Covenant Mountain & Prayer Center” and the latest name in their website www.kingdomofjesuschrist.org, “Glory Mountain.”

Jody Diarog, one of the leaders of the group Jody, who was already in his teens in 1997, said “they (cooperative) did not respect the status quo.”

“The status quo ordered to stop the fencing but they (cooperative) fortified it and their men continued to convince, trick, buyout and harass many of the residents to vacate the area,” he said.

Jonas said it was Barangay Tamayong Chairman Greg Canada who talked to his mother to offer her P10,000 for her home lot.

“My mother said the amount couldn’t even pay for the crops on our lot. So Canada doubled it. My mother agreed, not because the amount was made bigger but because Canada said if she would not accept it, they would carry our house off the lot,” he said.

Jody said the cooperative, “buy-out at a very low amount and harass you into accepting it.”

He said that about the same time, Quiboloy also began building a prayer mountain at Barangay Tamayong.

In the kingdomofjesuschrist.org website, it says that “The Covenant Mountain and Prayer Center’s (CMPC) building structures were completed within six months of 24-hour non-stop construction in 1999.”

CMPC “is located at the foothills of Mt. Apo in Tamayong, Calinan, Davao City, Philippines.” Its area is eight hectares or 100, 000 square meters, and is at 10,311 feet above sea level.

The website also said that “60% of the flowers and plants in the entire vicinity were imported from around the world” and that “seven trucks of water are consumed everyday in maintaining its landscapes and gardens” and “leaves of pest-prone plants are soaped individually by the gardeners.”

Jody said that while CMPC is more or less three kilometers away from Sitio Kahusayan, the cooperative have been able to buy almost all of the lots except that of the village’s Datu or traditional leader Dominador Diarog.

“Canada offered the Datu with P50,000 for his two-hectare home lot. They (Canada and Datu Diarog) call each other Kumpare (Compadre) so the Datu politely declined Canada’s offer saying he has no place to eat to cultivate for the food of his family,” said Jody.

Jody said that Canada approached Datu Diarog in February of 2008.

In March, there were several attempts to burn Datu Diarog’s house in Sitio Bato in Barangay Manuel Guianga.

On April 29, Datu Diarog’s house was strafed with bullets.

Datu Diarog was killed, his wife and four children, three of whom were minors, were wounded.

Quiboloy who was linked to the killing put in a one-page advertisement published in the local papers where he said some people may have dragged the name of the “kingdom” to confuse, distort the true picture of the incident, or mislead the authorities.

“We strongly deny these as totally false and baseless, if not ridiculous,” said Quiboloy.

In April 2011, indigenous people’s group Pasaka Southern Mindanao accused Quiboloy’s men of harassing the Bagobo-Klatas while the Army’s 84th Infantry Battalion “facilitated” the entry of backhoes in the area to build roads.

In August 2012, 13 houses of Bagobo-Klatas were burned in Sitio Papag, Barangay Manuel Guianga.

Pasaka and the Diarogs accused Quiboloy as behind the burning.

But Quiboloy denied the accusation.

Davao City Mayor Rodrigo Duterte, close friend and political ally of Quiboloy, have always maintained that while Quiboloy is his “friend,” he will not protect him.

Duterte issued another “status quo” order in 2008 after the killing of Datu Diarog but the Bagobo-Klatas say this has not stopped the attacks against them.

Meanwhile, Engineer Ricky Padrique of the NCIP Davao City Provincial Office, in a phone interview said that the deliberation for the Bagobo-Klata’s Certificate of Ancestral Domain Title (CADT) was already finished May last year.

“As of now is it is in the segregation stage to see if there are already titled property (within the CADC),” he said.

“The DENR will then issue a Certificate of Nonoverlap which will be the basis of the ROD (Registry of Deeds, now the Land Registration Authority) to issue a title,” he said.

While the legal processes are ongoing, Jody said they “have learned that the justice system have always favored the powerful.”

“But now we are ready to die for that piece of land we can call our own so that our children can still survive,” he said. (davaotoday.com)