Farmers yearn for land to till, higher produce price in NDF peace forum 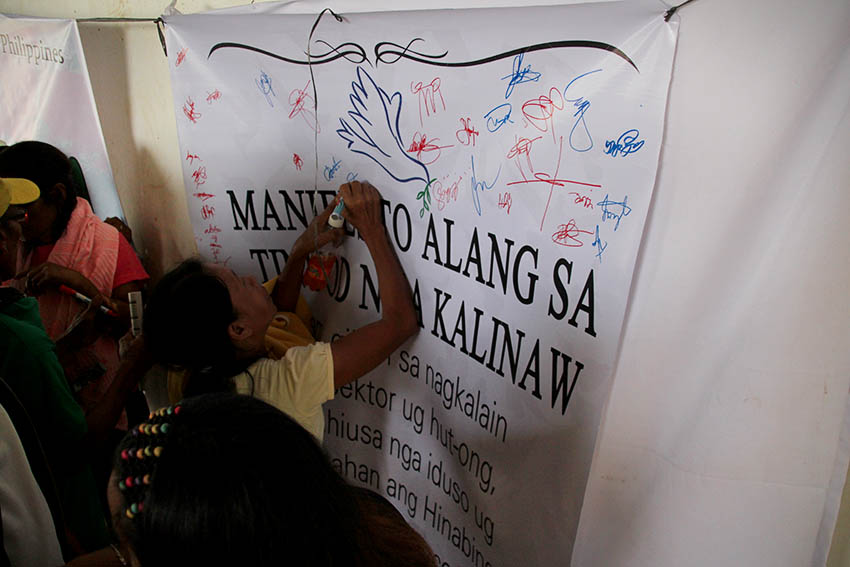 SUPPORT FOR PEACE. Residents from Barangay Makopa in Laak, Compostela Valley sign a peace manifesto signalling their support to the peace talks between the Philippine government and the National Democratic Front in a peace forum on Tuesday, Jan. 10, 2017. (Paulo C. Rizal/davaotoday.com)

COMPOSTELA VALLEY, Philippines – Ernie Vacunador, 42, has been farming for more than two decades. But for so long a time, his question remains: why would the country’s food producers find themselves nothing left to eat?

He has five children, two of whom have stopped schooling because of poverty, and one of them is an incoming college freshman.

Another farmer, 65-year-old Temmy Omega has been a farmer for more than three decades in New Corella, Davao del Norte

Omega said: “Yes, the price of seedlings are increasing and the price of the produce after the harvest is going down.”

Worse, while they pay for most of the production needs, they only get earn almost nothing because of the very low market, Omega said.

Vacunador and Omega were among the 500 farmers who travelled to Barangay Makopa in Laak town, Compostela Valley for a peace forum organized by the National Democratic Front and the New People’s Army Comval North Davao South Agusan Subregional command on Tuesday, January 10.

In an interview with Davao Today, Vacunador, a member of Montevista Farmers Association said the farmers are hoping that the peace process would address their demand for lands to till and higher price of their produce.

“Hangtod karon akong nakita nga sobra kalisud kay among produkto nga saging halos pangayoon na man lang (Until now it’s very difficult, the bananas we produce are almost given away for free because of its very low price),” he said.

A kilo of the Tundan variety is sold at P6.00. “The price could only afford a stick of cigarette,” Vacunador said.

Sometimes the income of the farmers could not even suffice to buy fertilizers for the farm they till.

“In my case, I till 1.5 hectares of land. I need three sacks of fertilizer for the whole land area which costs P1,100. If I get to produce only 200 kilos of bananas, that’s just P1,200 enough for a sack of fertilizer. What about our food to eat?” he said.

The high costs of maintaining a farm and the low price of produce make farmers vulnerable to loan sharks.

He said that on December 14 last year, their group Montefarma, met with their buyers to negotiate in increasing the price of their bananas from P4.00 a kilo to P10.00 a kilo.

Vacunador said they hope the peace talks would bring change on the farmers’ lives.

Vacunador said their association has even talked about the peace talks.

“We hope an agreement that will help the farmers will be implemented in the country to address the basic our basic demands,” he said in vernacular.

A 61-year-old Dibabawon Lumad, Daniel Bugay Mailan believes that through the peace talks the people will be united and will achieve genuine peace and order.

Mailan, from Barangay Bulliokan in Laak town said despite the ceasefire there are still military operations in different villages.

He said he hopes the peace talks will continue so that the farmers can go on with their farming without any fear of conflict.

“There will be no more chaos because of peace talks. It means there is an understanding between the government and the NDFP,” Mailan told Davao Today.

Caloy Montealto, NPA spokesperson of the Comval North Davao South Agusan Subregional Command said during military operations, it is the farmers who bear the brunt of militarization when they are subjected to red-tagging and abuses.

“They are mistaken as NPA rebels or supporters and are subjected to harassment and threats,” he said.

But farmers are also the main force of the New People’s Army.

Montealto said most of their members are farmers.

“They experience severe poverty because of landlessness and abuses by the country’s landed elites,” he said.

Montealto told Davao Today in an interview that there were several instances when the soldiers would enter guerilla zones.

But Montealto said the NPAs abide by the order of the Communist Party of the Philippines regarding the unilateral ceasefire.

“That’s why no armed encounters took place,” he said.

Army’s Brigadier General Gilbert Gapay of the Joint Task Force Haribon said the Army’s presence in the communities is for “peace and development.”

He said the Army reaches out to communities that are not frequently visited by government service agencies.

“Yung iba pa nga hindi pa nakikita yung anino ng barangay captain at ibang government agencies (Some of them have not seen even a shadow of a government official),” he told a press briefing here on Wednesday, Jan. 11.

The third round of the GRP-NDF peace talks will discuss about the details of a comprehensive agreement on social and economic reforms, the second substantive agenda item of the peace negotiations.

CASER is described as the “heart and soul” and the “meat” of the peace negotiations by negotiators from both the NDFP and the GRP’s side.

“What we need to do is get a consensus. If we reach a consensus, the talk is done and we will have a lasting peace,” he said in an interview with reporters during his attendance to the Communist Party of the Philippines’ 48th anniversary in Paquibato district here on Dec. 26, 2016.

Bello admitted that the government’s CASER draft is shorter than the NDF’s draft but said that theirs is more extensive.

Bello said the government’s draft on CASER is assisted by professors from the University of the Philippines.

The NDFP’s first version of its CASER drafts was finished on February 26, 1998, 18 years before the resumption of the peace negotiations between the GRP and the NDFP.

The NDFP believes that the huge task of addressing the armed conflict is identifying “social forces, institutions, and their processes that have hampered our country’s progress and development and kept it backward in economic and social terms.”

Among the problems identified by the NDF is the domination of US through “onerous” multilateral and bilateral trade agreements.

Bello said they will be spending more time to talk about CASER.

“After the meeting in Rome, the meetings of the reciprocal working committees will continue in the Philippines or any other country,” he said.

The government is eyeing to reach an agreement with the NDF on social and economic reforms within a year of President Rodrigo Duterte’s term.

Bello said the are hopeful to reach a final peace settlement with the communist movement by August this year. (davaotoday.com)