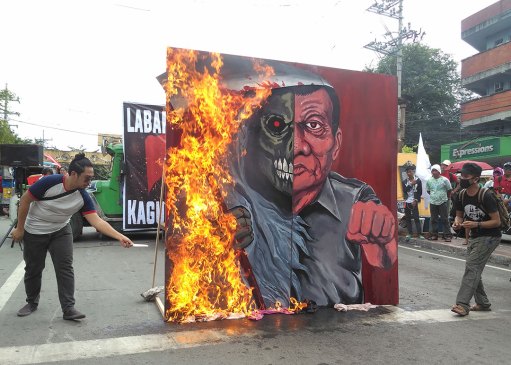 Gualberto, 42, and most of the farmers in sitio Compra, San Mateo, Norzagaray, Bulacan do not own the land they have tilled for decades. This September, Gualberto and her fellow farmers weeded out tall grass from a portion of a 75-hectare land and planted palay, vegetables, root crops and banana.

A few days later, security guards and personnel of the Royalty Moluccan Realty Holdings destroyed the makeshift hut of their organization and pulled out some of their crops. Just this Wednesday, Oct. 17, the guards fell a hundred banana trees. Still, Gualberto and the other members of the Samahan ng Magsasaka sa Sitio Compra (SMC) are resolved to maintain their collective farm. Most of the farmers in their small village have settled there for decades, the first ones arriving in the 1960s.

“We only wanted to put food on our table,” Gualberto told Bulatlat in an interview.

In other parts of the country, thousands of farmers under the banner of Kilusang Magbubukid ng Pilipinas (KMP) have done bungkalan — occupying lands to plant food crops.

In Negros region, more than 5,000 agricultural workers have cultivated 3,000 hectares of land since 2009. According to John Milton Lozande, secretary general of Unyon ng Manggagawa sa Agrikultura (UMA), the collective farms have staved off hunger of at least 5,000 farm workers especially during tiempo muerto (dead season) in sugar plantations.

Tiempo muerto, which happens from May to September, is the worst for sugar plantation workers. “Pakyawan” rate or the wholesale payment for 10 to 15 workers is as low as P200 to P300 per day. Each worker takes home P20 to P30 after a day’s work.

With the rising prices of food and other basic commodities, Lozande said the National Federation of Sugar Workers (NFSW) will expand their bungkalan campaign to cover more than 5,000 hectares of land in five different towns. Most of the areas targeted were covered by the government’s land reform but were either not distributed to the farm workers or had been reconcentrated in the hands of the landlords.

Just like in Negros, farmers from KMP chapters in other regions have also resorted to bungkalan.

In Southern Tagalog, nearly 1,000 hectares of land are cultivated by farmers, benefiting 3,000 families across the region.

In Central Luzon, farmers from Nueva Ecija, Tarlac and Pampanga cultivated more than 600 hectares of land.

In Panay, farm workers cultivated more than 400 hectares of land.

In Caraga region, nearly 2,000 hectares of land are reclaimed and cultivated by more than 600 agrarian reform beneficiaries.

The victories of the bungkalan campaign were not without sacrifices, Lozande said.

Their bungkalan gets no support from government. They do not have irrigation, no farm tools and machineries and other support facilities.

Negros agricultural workers cultivate the land by feet in one of their bungkalan areas. Negros agricultural workers cultivate the land by feet in one of their bungkalan areas. (Photo courtesy of Kilusang Magbubukid ng Pilipinas)

“Bayanihan talaga,” Lozande said, adding they would manually prepare the land by feet.

Their campaign is being met with violence.

In Negros alone, 26 of the victims of extrajudicial killings since 2017 were involved in bungkalan campaign. Scores were also arrested and slapped with trumped-up charges.

According to KMP, 163 farmers, fisherfolk and agricultural workers were killed under the Duterte administration.

“Not one area of any successful bungkalan did not go through harassment from soldiers, goons, policemen,” Lozande told Bulatlat in an interview. “Government officials in the region came from landlord families.”

With the government’s failure to address landlessness, farmers and agricultural workers implement their own agrarian reform, relying on the strength of their collective action.

After joining the protest in Manila, Oct. 19, Gualberto and her fellow farmers went back to their homes and farms already fenced off by the real estate company. They have greater resolve in defending the land that knows their hands.(Reposted by davaotoday.com)