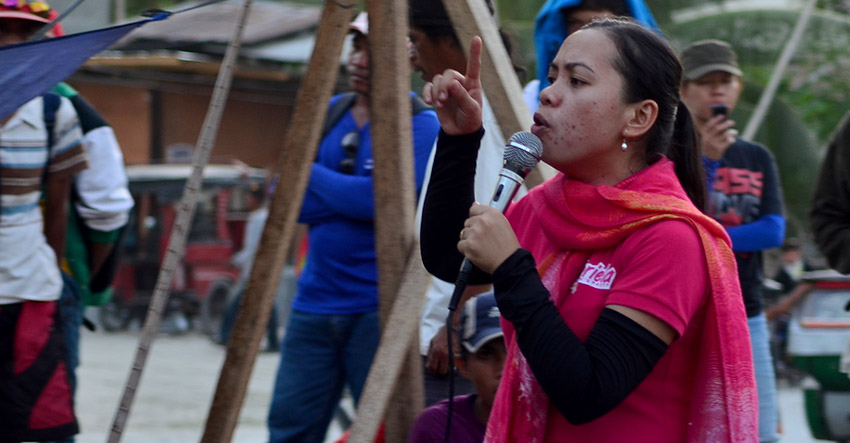 TAGUM CITY — A women’s group on Thursday demanded the military to pull out from a community of Lumads, or indigenous peoples in Bukidnon following the death of two Lumad farmers.

Gabriela cited the report from Katungod Lumad Alert as it identified the fatalities as Michael Sib-ot and six-year old Edjan Talian. The two were allegedly killed last April 27 by the military during an intensive military operation in Bukidnon.

Gabriela Women’s Party nominee and Mindanao spokesperson Bai Ali Indayla, in a statement, denounced the killing and demanded that those who were directly and indirectly involved in the incident must be “punished.”

According to Indayla, Sib-ot was accused of illegal possession of firearms and was gunned down after he tried to seek shelter in a nearby church.

“The child Talian was returning from fetching water when hit by bullets being fired by military elements who were reportedly randomly chasing and shooting other residents in their respective homes,” she said.

Indayla claimed that the military has “forced residents to report for meetings where the victims’ relatives were being forced to sign settlement agreements and self-incriminating admissions. People were pressured to join a government-sponsored organization, but victims’ relatives refused to sign.”

She said the military has no business to enter the community of the Lumad in Sitio Kaulayanan in Talakag. For Indayla, the act of military can be construed as a violation of International Humanitarian Laws and the UN Declaration on Indigenous People’s Rights.

Both laws ensured the protection of civilians and forbade military operations without the free, prior and informed consent of the affected community.

“Aquino has proven that until his last two months of power he will not relent on killings of indigenous peoples and their defenders. In protest, the people of Mindanao condemn and disown his Daang Matuwid, and we will make sure his anti-Lumad and anti-Moro clone Mar Roxas will have zero votes in Mindanao,” Indayla said. (davaotoday.com)