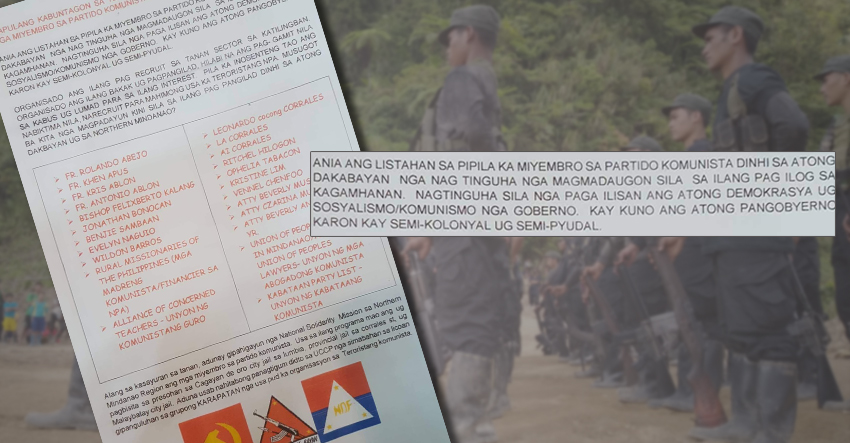 The flyers being distributed in Cagayan de Oro City tagged local church workers, lawyers, rights advocates and a journalist as “terrorist members of the New People’s Army and Communist Party of the Philippines.” (davaotoday.com)

The flyers tagged local church workers, lawyers, rights advocates and a journalist as “terrorist members of the New People’s Army and Communist Party of the Philippines.”

The group reported that the flyers were discovered by delegates attending the assembly and launching of Hustisya-Northern Mindanao on Friday morning at Philtown Hotel in Cagayan de Oro City.

A suspected military agent approached the security guard of the said hotel and handed him two brown envelopes with each contained 13 copies of the flyers, it added.

“Such notorious lists have further endangered the already perilous situation of human rights defenders. We have repeatedly raised how these arbitrary and baseless accusations incite threats to the lives and security of named individuals, the worst of which is that they become victims of extrajudicial killings,” said Karapatan Secretary General Cristina Palabay in a statement.

Also written on the flyer is a warning that members of the CPP visit jails in the cities of Cagayan de Oro and Malaybalay in a National Solidarity Mission. It mentioned that Karapatan conducts meeting inside the United Church of Christ in the Philippines located at Licoan, Cagayan de Oro City.

The mission held on February 21 and 22, Palabay said, aimed to assist the families of victims of human rights violations in the region and to “look into the situation” of arrested progressive leaders Datu Jomorito Guaynon of IP group Kalumbay, KMP leader Ireneo Udarbe, and four members of the Misamis Oriental Farmers Association and that of evacuees from Lagonglong, Misamis Oriental.

Karapatan, IP and Moro group Sandugo, and peasant group Kilusang Magbubukid ng Pilipinas led the said mission and engaged with the Commission on Human Rights-Region 10 (CHR-10) to call for their release.

Palabay calls on the CHR and local government unit address the incident and “protect the rights defenders and make accountable those who continue to put their lives at risk.”

“Activists and everyone is being wrongly tagged as terrorists. The anti-terror law is being arbitrarily used against activists like Guaynon and Udarbe. This situation is made worse by the continuing implementation of martial law in Mindanao,” Palabay said.

Which was denounced by Anakpawis Rep. Ariel Casilao as it endangers the lives of its members making them as “open targets to extra-judicial killings, threats, harassment, and prosecution.” (davaotoday.com)