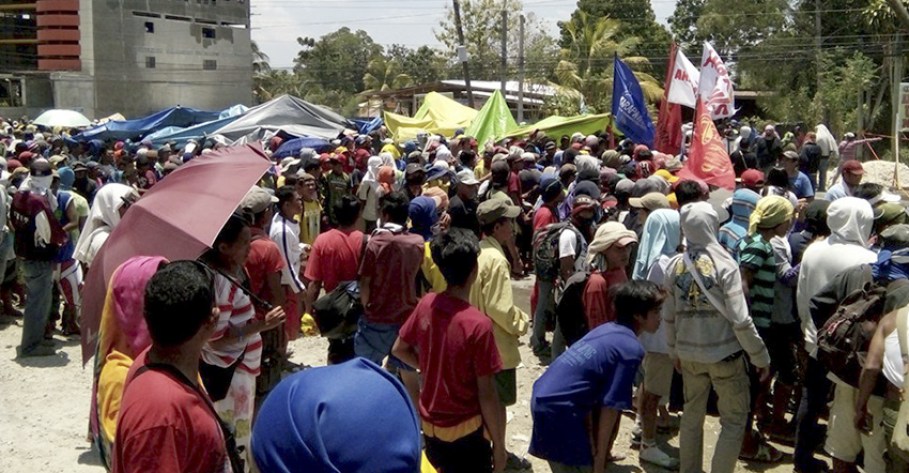 WHERE’S THE RICE? Around 5,000 farmers protest along Davao-Cotabato national highway in Kidapawan City on Wednesday, March 30 to demand for rice assistance as they suffer the impact of prolonged drought in the province. (Danilda L. Fusilero/davaotoday.com)

DAVAO CITY — An estimate of 5,000 farmers from eight municipalities of North Cotabato province blocked the national highway in Kidapawan City early morning on Wednesday, March 30 to demand for rice from the provincial government to help them survive the drought.

Norma Capuyan, chairperson of Apo-Sandawa Lumadnong Panaghiusa in North Cotabato said the farmers from the towns of Mlang, Tulunan, Makilala, Roxas, Magpet, Antipas, and Arakan, and from Kidapawan City assembled since 5:30 in the morning along the Quezon Boulevard highway in Kidapawan City. The group is demanding the rice assistance intended for the farmers who are affected by the dry spell.

Capuyan said they are demanding 15,000 sacks of rice and rice inputs as part of the calamity fund while “farmers are unable to harvest their produce and are waiting for rain.”

“That’s our maximum demand, but we have minimum demands for the provincial government,” said Capuyan told Davao Today in a telephone interview.

She added that they also want the provincial government to “intervene and assist us in increasing the price of farm produce such as rubber, banana, rice, and corn.”

Capuyan said the price of their produce are “too low, while the prices of basic commodities are too high.”

She said they are also demanding for the suspension of military troops in communities, particularly in the “lower part of Kidapawan” which she said are hindering the farmers to go to their farms.

The farmers also want to the provincial government to investigate the alleged distribution of fire arms to militias by a government official.

During the negotiations with Kidapawan City Mayor Joseph Evangelista, Capuyan said the mayor wanted to get the names of those who joined the rally and the rice will be coursed through their respective barangays.

However, Capuyan said they want to sign a memorandum of agreement with the provincial governor, Gov. Emmylou Taliño-Mendoza in their barricade to ensure that their demands will be given to the farmers.

She said the farmers do not want to have a repeat of what happened 18 years ago where they went home with nothing.

“We want to receive the rice here in the picket line. We will not leave this place until Governor Lala negotiate with us,” she said.

Mendoza was reportedly in Manila during the incident.

As of 4:25 in the afternoon, the provincial government has told the protesters that the governor will be arriving in the city at 8:00 pm. The barricade is ongoing as of press time.

The largest by far in the grassfire incidents is the fire last Saturday, March 26, that razed 300 hectares surrounding the country’s highest peak, Mt. Apo found in the boundaries of Davao City, Davao del Sur and Cotabato provinces.(davaotoday.com)