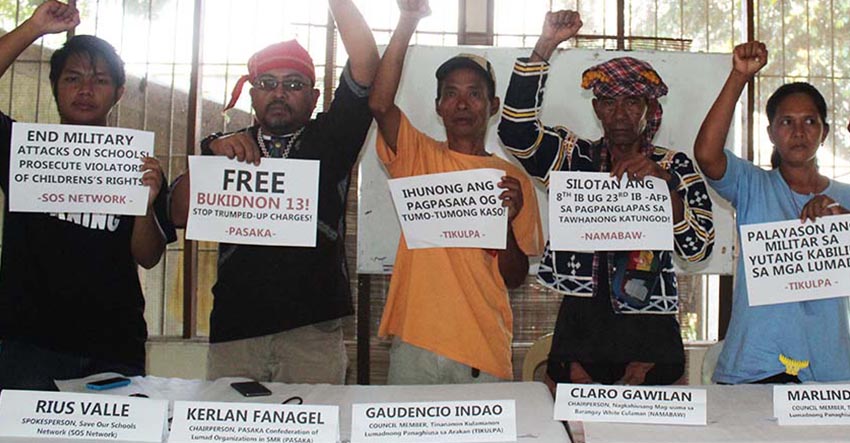 Tribal leaders and farmers demand the government to pull out the military troops from their community. (Medel V. Hernani/davaotoday.com)

DAVAO CITY – A tribal Matigsalug farmer and leader of a local organization in Kitaotao, Bukidnon alleges the Army of having a list of 67 individuals to be arrested, including him, after arresting 13 others last week.

The KMK is a provincial organization of peasants which Namabaw is a member chapter.

Indao would not say how he knew of the alleged list but said their barangay chairman, Felipe Cabugnason, also called on him “to surrender to the fold of the government so we can unite.”

“I escaped and have not slept in our house since August 26,” he said.

Indao said his 12-year old son also left because he alleged “he was made to carry around bombs” while his other children, one is five and the other is seven years old were the ones who left first on a habal-habal (passenger motorcycle).

Last Thursday, Indao reported that at least 15 persons, including Namabaw chairperson Ellen Manlimbaas, of Barangay White Culaman were arrested by elements of the Army’s 8th IB.

Indao said that Army arrived in their place on August 25 and in the early morning of Thursday, they began to round up the farmers whom they accuse of being leaders and members of the New People’s Army.

Indao, meanwhile, clarified that while he previously quoted a certain Private First Class Nicolas Rivera as saying that there were 13 farmers who were arrested and airlifted to Cagayan de Oro, he said he was informed that the arrested farmers were instead brought to Maramag town, also in Bukidnon.

Indao told Davao Today on Wednesday that their relatives reported to him that the individuals are now in Malaybalay.

Indao said Labaninay was later released after the Army found out she has a seven-month old baby.

The list included three other persons who Indao said were still being held by the Army in the area and were forced to become cooks.

Liliben Manlumaray, 22, in an interview with Davao Today, said armed men knocked on their doors at 4:00 am of August 26.

“They woke us up and told us they were police officers and that they have a search warrant. I opened the doors immediately and my husband told them they must not enter our house if they are soldiers,” she said.

But Manlumaray said the armed men in “batik” (fatigue) said they are not soldiers but policemen.

“They did not introduce themselves, they told us to go out. There were eight of us in the house, five minors including my six-year-old child and my husband’s 17-year old sibling,” said Manlumaray whose husband Arnel was one of those arrested.

Manlumaray said a total of 16 individuals, including three children, who are also siblings of her husband, aged two, five and seven were arrested and boarded in a helicopter.

She said they were able to get the three children on Sunday in the police station of Maramag.

The Eastmincom said the operation was made in the effect of 57 search warrants by a composite team of the Army’s 8th Infantry Battalion and the police’s Public Safety Company.

The Army said they also recovered three sacks of subversive documents and two sacks of medicines believed to be supplies for the NPAs in Bukidnon.

Gaudencio Indao, 53, Isidro’s brother and the vice-Chairman of their sitio said he was made a “witness” by soldiers during their search of the houses.

“We found no guns during the search inside the houses,” he said.

He said the guns and other explosives were recovered in the grassy portions of the community.

“Some were buried,” he said.

He said the Army’s “labaw” (high-ranking official) “told the people of (sitio) Malinao including me, that we must surrender or they will arrest us and put us all in a helicopter.”

“I was confused what our fault is,” he said.

Gaudencio said he was made to sign a “surrender document.”

“I thought everything will be solved after signing the document, but I was told by an Army officer to write the names of the men in our sitio and organize them and I will be made as chairman of the BDS (Barangay Defense System),” he said adding that he wrote 21 names from their sitio.

Gaudencio said he escaped their community because he does not want to “take up arms and run after NPAs.”

Isidro and Gaudencio, who left their barangay Monday, are now in Davao City to hold public protests on the incident.

Gaudencio said he was told by an Army officer to close down all schools of Tikulpa (Timamanon-Kulamanon Lumadnong Panaghiusa), an organization of farmers which Fr. Fausto Tentorio help build.

Tentorio is an Italian missionary killed allegedly because he is vocal in the entry of mining and plantation interest in North Cotabato and Bukidnon.

Gaudencio said the Army officer told him that the three schools of Tikulpa should be closed “or else they will burn it.”

“I’m afraid to go back home because they will make me hold a gun as the BDS chair. My wife and my children doesn’t even know I am here,” he said. (With reports from Zea Io Ming C. Capistrano/davaotoday.com)